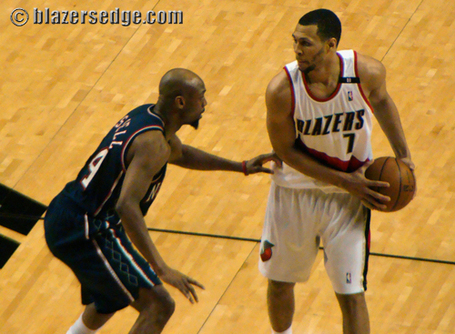 By now, you know the Blazers came back to beat the New Jersey Nets 109 to 100 in the Rose Garden.  The final score didn't do justice to the nature of the game, as the Blazers started slow yet again and were forced to grind out another closer-than-you-would-like home win, thanks in large part to Brandon Roy playing for almost 45 minutes.  Roy finished with a 31 point night, Nicolas Batum chipped in with a career-high 20 points and the biggest shot of his life down the stretch, and both LaMarcus (19 / 10) and Travis (13 / 10) continued their beast parades.  A well-balanced team performance on a night when the core players saw their minutes ramped up considerably in the absence of their injured teammates.

Let's get right into the game notes.

Nate entered the press room with a smile saying, "I bet you want to talk about Nic Batum."

Nate on Nic Batum: "What a great job. That kid had a huge assignment tonight guarding Carter. And basically just without Rudy, I was really trying to scramble to find a rotation that worked and we went with Nicolas, Travis, Brandon, Blake and LaMarcus in that first half. It was a good group that got us back, we could switch defensively. Offensively, it was working for us.  My coaches I thought, I think they do a great job every night, but really solid job tonight late in that game convincing and debating whether to go back to that unit. Joel was doing a nice job and we got back to that unit with Nicolas, Travis, LaMarcus, Brandon and Blake and it worked out.  He was knocking down his shots. Defensively, he made Carter work.  On the defensive end, he took some tough shots.  I thought it was a total team effort tonight."

Nate on the talking process on the end of game rotations: "We do it every game. Where we are looking at combinations and without Rudy it kind of screws it up a little bit. I have a rotation I'm comfortable with. I thought Bayless and Sergio came in and did some good things for us.  Down the stretch, that unit was working so basically we went to a six or seven man rotation. Gave Bayless a little time and we stayed with Nicolas, Travis, Joel, Brandon played that whole second half. We just went with those guys that were working.  The call down the stretch, with about 4 minutes to go, to get Joel out.  Lopez was playing great, he was big, we needed size, he was scoring over Joel too. But we needed some size and we decided to go with that small unit and it worked out."

Nate on whether there was a question about whether Nic would play: "No. He was sore but nothing as far as doubting him to play."

Nate on the tale of two halfs for Brandon: "Yeah, we've seen this guy do so many good things, that when he has a night where his shot is off, everyone is like, 'what's going on?' He's human. He's going to miss some shots.  The good thing about tonight, being that type of player, he found a way to get it going.  He didn't give in to it, he knew we really needed this game, he had to get it going, I think he was 0 for 8 during a period of time, and then he got it going. I think that's the sign of an all star."

Nate on Brandon in the huddle: "He's talking. He's talking about playing hard, playing d, he got his rhythm, he's making shots, but yeah he's talking to his teammates, I think they all were communicating.  They didn't give in. They didn't give up tonight. They played for 48 minutes tonight and we had a 38 point fourth quarter tonight which was huge."

Nate on closing out the homestand with a win: "It's important. It would have been great to have been able to get all 4 games this home stretch and we didn't. But we got 3 out of 4 which is good. We matched our record from last season as far as 41 wins.  To get this game, being shorthand ed, and New Jersey is a tough team before we go on the road, it's a good win for us. Now we want to get on the road and win some games."

Nate on the home crowd: "That was part of what we talked about at the beginning of training camp. Making the Rose Garden a special place to play. We had to bring that play or that effort to the floor.  The crowd is going to be there and they do everything they can to lift us. Once we make some plays or we get some things going, our fans understand the game, they know when their team needs a lift.  They chant "defense" or whatever it is when we make an offensive play, they get on their feet.  Our guys, they ride that momentum."

Nate on feeding off the energy: "Well we are young so I guess it is.  We are a young team and your crowd can help you. Our crowd has helped us this year."

Nate on making the Rose Garden special: "Effort.  You come out there and you fight and you don't give up and you don't give in to maybe a team playing well, or you're struggling as we were in the first half, we didn't have a good first half, the second half you continue to battle and the crowd will be there. They are trying to lift you and support you and you have to just keep working."

Nate on making good decisions as a young team: "Normally it starts defensively, getting aggressive and getting stops, then offensively putting players out there and allowing them to use their talent, their ability." 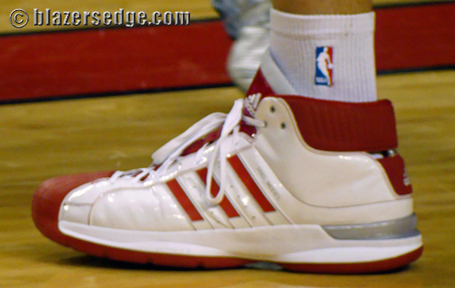 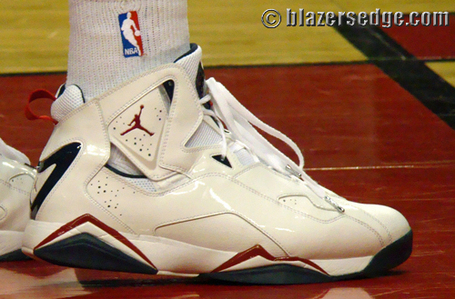 I forget who was rocking these Jordans but they are sick.  Almost got these at the employee store yesterday (big ups to Jimmie!) but went with these instead.