Full credit to the Dallas Mavericks tonight who, despite being on the second leg of a road back-to-back, out-executed the Portland Trail Blazers throughout the 4th quarter to come away with a 93 to 89 road victory.

It was a frustrating night for the Blazers for a lot of reasons.  Playing without Rudy Fernandez and Greg Oden, the team's rotation changed and its second unit struggled, most obviously during a 19 point second quarter.  Travis Outlaw, who I do not hate, went for another 20 point effort, including 4 three pointers; his benchmates, apparently in awe of Trout's dominance, combined for zero points on 0 of 10 shooting.

While there was plenty of in-arena complaining when Channing Frye lined up and missed a long 3 point attempt during the game's final minute, the endgame execution really hinged on a critical turnover by Steve Blake, who attempted to hit a streaking Brandon Roy during a helter-skelter sequence.  The play started with Outlaw picking Jason Kidd's pocket clean (those words could not possibly have been written in that order before tonight).  Outlaw went to the ground to retrieve the loose ball and then, rather than calling timeout, quickly passed to Blake near midcourt.  Blake admitted that he never saw Antoine Wright, who hustled back on defense and stole the ball back immediately before it could reach Roy, who was otherwise headed towards a sure layup.

A bucket by Roy would have tied the game at 88.  Instead, Wright's steal and the a dagger jumper by Nowitzki that soon followed made the score 90-86.

Hindsight is 20-20 but with the ball loose on the ground, the game so tight, and the clock showing under a minute to play, I would have liked one of the Blazers to use one of their two remaining 20 second timeouts as soon as Travis secured the ball.  Didn't have to be Travis who signalled the timeout.  It didn't have to be Blake.  But use the timeout there, set up the 1-4 offense and I might be chronicling another miracle finish by the Blazers.

As it was, you''ve got to be happy that the Blazers came up short on that possession because of over-aggressiveness rather than a lack of aggressiveness, especially considering the flat play the Blazers exhibited throughout much of tonight's contest. The sequence turned out to be another snap-your-fingers "shucks" kind of moment in a game that was full of them.

But full credit to Dirk's big shot making. Full credit to Antoine Write's instinctive hustle on the game-deciding sequence.  Full credit Jason Terry, one of my top 10 favorite non-Blazers, for giving Portland fits on his way to a 24 /5 /4/ 2 night. 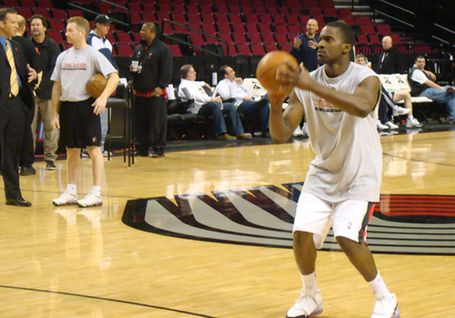 Nate on the difference tonight: "Making plays, of course.  You gotta take care of the ball. You gotta make shots.  You've gotta get stops.  Dirk hit a tough shot down the stretch to basically give them a five point lead. We had a steal. We gotta capitalize off of that.  But you've just gotta make plays, against that zone we had opportunities to knock down some shots and we didn't knock down our shots.  Down the stretch the difference is you gotta make plays."

Nate on whether the team was getting the shots they wanted: "I thought early, I thought in the first half, we just missed some shots. We had some shots that we can knock down, and the shots weren't falling against the zone. We didn't attack it. We passed around the perimeter.  There were gaps, one time Travis went to the basket and got to the rim.  We had some open looks against that zone, just needed to be aggressive."

Nate on the team's aggressiveness: "Well, if you're open you've got to shoot the ball. The one thing I thought at times, we were a little hesitant being aggressive. There were lanes for us to drive the ball. You want to attack.  What we want to do on the offensive end of the floor, man or zone, is attack the paint.  There were some gaps and they were forcing us to be aggressive.  When you have the open shot you gotta take the shot."

Nate on whether Brandon was sick: "No."

Nate on Brandon's struggles: "Yeah, you know, I guess he's going to have a game like that.  Tonight, we need to play well, we need to be at our best and tonight we didn't knock down some shots.  Some shots he's capable of making didn't fall for him and we did an ok job taking care of the ball but I think some turnovers at crucial times when we were about to make a run or get back into the game were pretty big."

Nate on Nic: "Nic is ok.  He got his shoulder tangled up but should be ok." 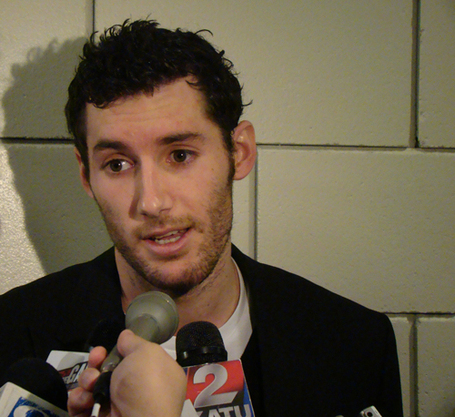 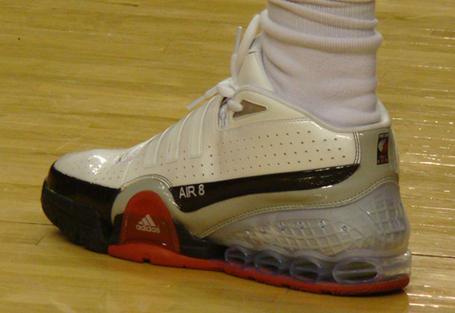 Martell's new adidas -- instant rivals with Brandon's shoes as best on the team.  Casey would like to make sure you all notice the Trail Blazer logo on the heel.  Pretty sweet. 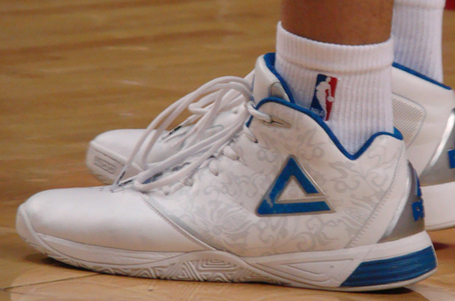