The Blazers jumped out of the gate tonight, hitting almost 60 percent of their shots in the first half, scoring 61 points in the first 24 minutes, and running up a 30 point lead over the Lakers.  It was more than enough to hold off a 4th quarter Kobe Bryant mini-rally to secure a 111 to 94 home victory over the Los Angeles Lakers.

The Blazers were firing on all cylinders, with big time contributions from all five starters.  Steve Blake ran the show, pushing the tempo throughout the first half.  Brandon Roy and LaMarcus Aldridge combined for 43 points on 15 for 33 shooting.  Nic Batum did his flying Frenchman thing all over the court. And, Joel Przybilla, how they love you Joel Przybilla, tallied 12 points and 18 rebounds in 35 minutes of play.

The Blazers won every major statistical category that Nate McMillan highlights: they shot more free throws (28 to 16), they grabbed more rebounds (46 to 38), and they committed less turnovers (10 to 13).  I don't think Nate could have reasonably expected anything more than he received tonight.  And, quite honestly, I don't think he expected the type of all-around performance his team delivered, especially after Saturday's unimpressive win against Minnesota.

Tonight, I couldn't suppress the smiles and fist-pounds.  It was a beautiful game, a beautiful performance.  Blazers fans can be proud of their team.

Offensive fireworks aside, those in attendance (and, I suspect, those watching on television) will remember tonight's contest for years as the game Rudy Fernandez was rushed to the hospital, wheeled out of the Rose Garden on a stretcher with a neck brace.  Tonight's game will be one that haunts.

My angle on the play couldn't possibly have been worse, as Rudy Fernandez and Trevor Ariza were running at me, head on.  As Ariza swiped at Rudy from behind, it was impossible from this vantage point to tell the nature or location of the contact.  All I saw in real time was rail-thin Rudy crashing into a pile on the baseline, his landing place obstructed from my viewpoint by cameramen and courtside fans.  He never resurfaced.

The aftermath of his cock-eyed flight brought immediate amusement (testerone-driven excitement, even) thanks to the scrum between Brandon/LaMarcus/Travis, who had apparently taken exception to Ariza's foul or his preening or both, and the Lakers bench.

That amusement gave way immediately to a sharp horror, as I panned from right to left and saw one of the game officials urgently signalling the Blazers bench, requesting medical attention on behalf of Rudy.

My clearest view during the entire episode was of the Blazers' doctor rushing his way across the court, as if in slow motion and on a treadmill.  As he bent down into the courtside pile, we waited, and waited, and waited.  Horror turned to nausea, a sickening feeling -- not directed at Ariza, his foul, or his posturing -- but at the medical unknown.  As the doctors handled things properly, slowing the scene down to a crawl to be sure Rudy was stable, every sensory input made the moment more agonizing: a glance at the scoreboard triggered a thought back to the unrestrained joy that had now evaporated from the building; the crowd's many attempts at rallying behind a "Ru-dy! Ru-dy!" chant, began dying off in time as the fear set in; even the replays, which brought a sense of relief because they seemed to show no horrific in-air contact and a very hard landing that was not likely to have caused spinal damage, were difficult to watch in the presence of 20,000 people who had no control over the health of one beloved man.

The word from the team is that Rudy was not seriously injured.  Nate McMillan said after the game that the neck brace had been used as a precaution and credit the Blazers organization with making detailed health updates available almost immediately after the game was completed.   Brandon Roy said he would give Rudy a call tonight to check in on him.  Both Brandon and Nate were amazingly calm given the circumstances and emotional weight.

Nevertheless, Rudy will be spending the night at the hospital for observation and has suffered a soft issue injury, which has him questionable for Wednesday's game.

Wednesday's game, despite its importance, should be the last thing on his mind.

Thankfully tonight we can say "these things happen in basketball" and, as Derek Fisher did in the visitors locker room postgame, "it was just a good, hard basketball play."

Because as frightening as it was, it could have been much, much worse. I think everyone, including Ariza, takes solace in that. 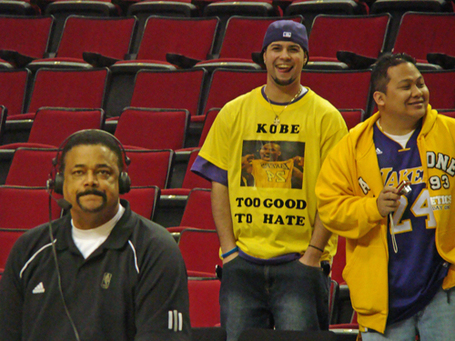 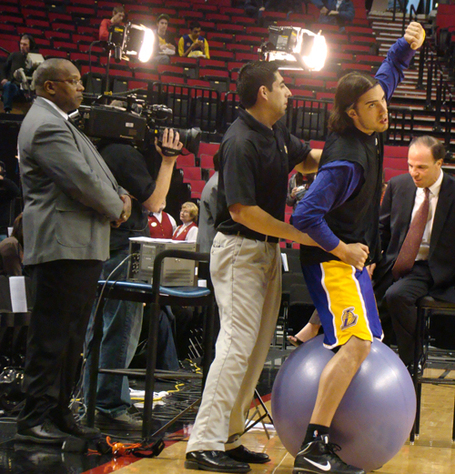 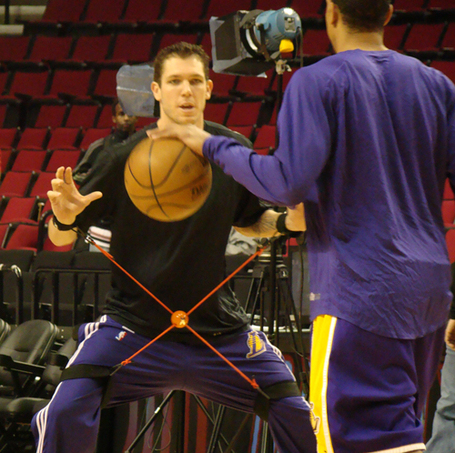 Nate on the highs and lows of the game: "Yeah.  Our guys were great tonight. They beat the best team in the league.  We had to beat this team. I thought defensively we played great defense, offensively we got great ball movement, and did the things we need to do to win this game. We couldn't hope. We had to go out and play.  We went out and played tonight. I thought we played like we are capable of playing. We had the attitude.  We were aggressive defensively. We were physical defensively. On offense, we executed. We got ball movement so we did the things you need to do to beat this team."

Nate on whether this was a big win: "Yeah, I mean, at this time of the season, to beat the Lakers with the best record right now and, you know, this situation, they basically had a couple of days off and was looking forward to this game.  We've had some success in our building, needing to play well.  So, yes, it is a big one for us tonight."

Nate on the fans: "Our fans have been great all season long but it starts with our guys.  What they do on the floor.  I like their aggressiveness. I like the way they were connected. Our crowd was rowdy right from the start.  The time that the horn went off.  Everybody did a good job tonight."

Nate on whether Rudy was talking: "To Jay. Yeah, he was communicating to Jay what was hurting.  Very dangerous play."

Nate on whether the flagrant 2 was the right call: "Yeah, because he's going full speed. Basically you hit a guy across his arm, his shoulder, like that and he almost flipped in that situation.  Again, you can foul a guy and grab him and send him to the line.  I don't think you h ave to go that far."

Nate on whether he was going to get into the scrum: "No. I'm thinking about Rudy at that time, our guys possibly retaliating in that situation. I think LaMarcus did get a technical, Travis, just trying to keep them calm in a situation like that. I thought for a few minutes we were steaming and rattled for a bit but we calmed down."

Nate on whether he expected his team leaders to stand up for Rudy: "I expect everybody to go over there in that situation.  Do what you need to do.  I thought since they were coming to Rudy's rescue and it was an emotional game. As I told our guys, not that you will see that type of flagrant foul but the physicalness of the game, expect that from here on out. You will have to learn to calm down and refocus.  This time of the season, what we're playing for, where we are trying to go, it's going to be that type of game, we've got to be able to stay focused in situations like that."

Nate on matching the intensity: "Yeah. Dallas is coming in here next and everybody is tight so you're playing for something.  That physical play is going to happen.  I think the rest of the season and for our guys we've got to bring that but we've got to be able to keep our composure in situations like that. Refocus and settle down and finish the game.  Or get ourselves back into a game.  I think it's good for us to learn from this. It's always good to learn off of a W."

Nate on the effort: "I thought it was as good [as San Antonio]. We talke about how we wanted to play, how we needed to play, put a lot of pressure on the ball, we wanted to deny certain sets.  Offensively we want to really push the ball and force the tempo. I thought we did that.  I thought those guys tonight went out and executed the gameplan great."

Nate on attacking the paint: "Aggressively go to the basket.  We felt like Gasol, he defends the basket but we could get there.  And get to the free throw line."

Nate on Rudy's condition: "We do have a report. He's ok. He has some pain, some chest pains.  He should be ok."

Nate on why there was a neck brace for Rudy: "At that time he was feeling a little something up in his neck but the report says he's going to be ok."

Nate on defending Kobe: "Just deny.  I think the best defense against a guy like that is to first deny his catch and make him work to get it.  And then square your shoulders and try to make him shoot over the top and they did that.  We rotated those two guys on him and they worked their behinds off to make it difficult for him to catch.  A lot of times when he caught the ball he was outside the 3 point line. Now he's taking long range bombs. I thought Joel did a nice job shadowing him and the pick and rolls and isolations. Making him shoot over the top, he's going to make some, but deny him as much as possible. We did a good job with that." 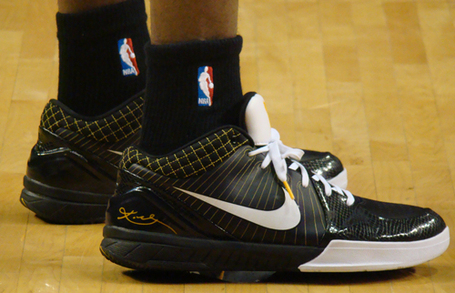 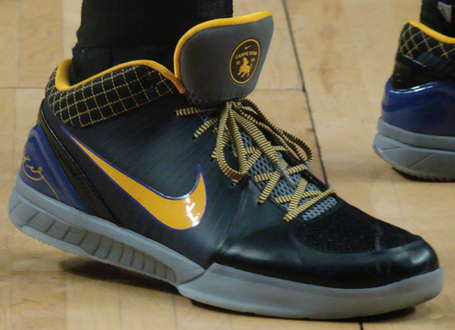 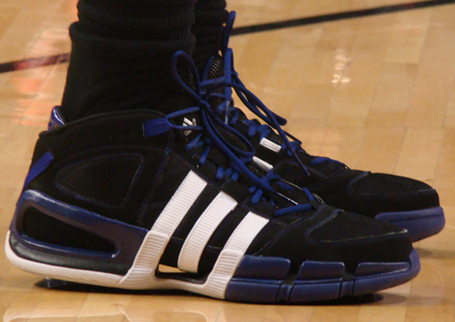 Adam Morrison. I forget the top 2.  I think the first one is Ariza. Someone confirm that one and ID the second one.