Check out the Portland Mercury's feature with Shoals! Here's an excerpt from the interview...

Basketball books, they don't sell very well, so the worst thing we could do- on top of this being a weird book- would be to make the book hard to get into. So we had to figure out how we could do what we wanted to, and still make it accessible to other people who wouldn't necessarily care about basketball. We try to talk it up as a book for people who are really into sports, or not into sports at all. There's so much information in the book that's presented in such a way: here's what you need to know, why it is, and here is a wacky drawing.

Ryan White at the Oregonian also makes an awesome promise to anyone who shows up to the reading.

Durant can score on anybody and is one day going to lead the league in scoring - particularly if OKC continues to flounder in the standings. He's good and going to get better.

Oden, on the other hand, is a post player on a team still incapable or unwilling to feed the post. It hasn't exactly accelerated his development.

Will Brandon ever feed the post with regularity?  One of life's eternal questions.  By the way, Dwight is on Twitter.  Add him.

Sean Meagher did a nice job interviewing Joe Freeman on the Oregonlive podcast yesterday.  Freeman joins Team Bayless and drops a hint about that trade Quick was talking about on the previous podcast.

Sean also has a strong interview with a "Thunder" blogger.  The highlight for me: his thoughts on the possibility of Durant leaving "OKC."  Shades of Cavs fans with LeBron.

There is definitely worry. Because we're really falling for this guy and it would break us if he left for money and fame. But I honestly don't see it happening - as long as "OKC" pays him.

I didn't notice any of you post this in the fanshots (then again,  Me :: Fanshots as Nick Young :: Purity of Basketball) but you should check out the sweet graphic Casey Holdahl has going in his explanation of the UCLA Cut.

Last but certainly not least, Kevin Pelton from BP worked up similarity scores for some of the all time greats, as requested in the comments of this week's two posts about similarity.  Here are Michael Jordan, Magic Johnson, Larry Bird and Shaquille O'Neal after their rookie seasons. 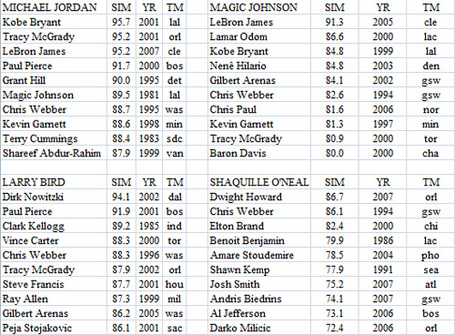 If you would have tried to run this for Jordan in 1985, even granting you only had six years of data, it would have told you nothing.   There hadn't been a player to come into the league like that in that time frame.

MJ was literally statistically incomparable when he came into the league.  Awesome.

Tonight it's what we've been waiting for all season: the epic matchup between Kevin Durant and... Jerryd Bayless!  Dave has been called into the Blazers war room after his phenomenal post about trading possibilities, so tonight so I'll be manning the post-game recap. Tweet me or email over funny links during or after the game. This has the makings of an incredibly exciting affair.