Last night we dropped a noggin bomb from Basketball Prospectus's Kevin Pelton. If you haven't yet read that, go do so now.  Today's sequel continues our look at the APBRmetric term "similarity" and how it applies to the Blazers.

To review quickly, similarity is a comparative rating (on a 1 to 100 scale) between any two players from NBA history that have played at least 250 minutes.  "NBA History" starts with the 1979-1980 season because that's when the 3 point line was added.  For reference, two identical players would score a similarity of 100, a score of 98 is virtually identical, 95 is very similar and anything below 90 is pretty sketchy. Similarity takes into account 13 separate factors, everything from the basics like height and weight to the uber-mathematic per-minute win % rating.

Similarity ratings don't guarantee or  predict a player's career path. But you can compare today's Oden (age 21) to all other players when they were 21. Then, you can rank the results from most similar to least similar.  The result is a list of names that provides a statistical foundation for how players who played like Oden at 21 ended up turning out.
Like I wrote yesterday, the main idea behind similarity is to froth at the potential of young players.  The Blazers' starting lineup just so happens to have an abundance of young players: 2 rookies plus Roy and Aldridge.  Perhaps no team is more fun to break down based on similarity.
If you enjoyed this, please be sure to thank KP2 in the comments.  You might have noticed that he snuck over to answer some questions last night so if something is sticking in your craw, let it be known and he might find his way over again.

Click through for the results for the Blazers starting lineup!

In the tables below, you'll see each Blazer starter at the top, followed by their 10 most "similar" players, their similarity ratings, which year of their career is being measured, and what team the player was playing for.
After each player, KP2 added a short commentary and I added my two pennies. 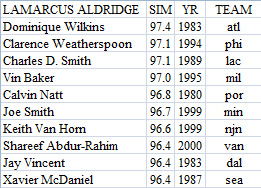 KP2 says... Dominique Wilkins? A weird name, which says more about Wilkins' rookie season (he'd yet to develop any outside game) than Aldridge. The rest of the comps make more sense -- offensive-minded power forwards of questionable rebounding prowess. Four of the 10 guys made an All-Star Game, th ough Baker was the only one to appear mult iple times.

Ben says... if you're of the opinion that LaMarcus needs to bang more, here's a case of ammunition for you. Interesting to see that none of the names he usually gets compared with (Garnett, Bosh, etc.) are on the list.  Statistics can be brutal if you are inconsistent, which LaMarcus was and still is on occasion. 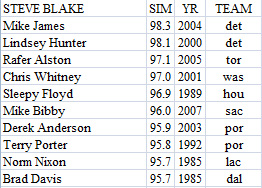 Ben says... It's interesting how high his similarity scores are. As KP2 mentioned when discussing Outlaw, when your skill set is defined and common in the league, the scores go way up.  More evidence of that here with Blake. 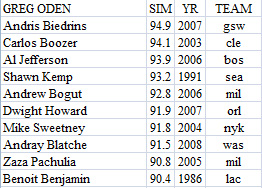 KP2 says... I'm not sure how much we can take from this list. Oden's usage is creeping up, but the fact that he's still a secondary offensive option enhances the similarity to Biedrins (which is hardly an insult). It's worth pointing out that in some cases "most similar" is really "least dissimilar," especially for unique players. Oden tends to qualify.

Ben says... I've been reading in the fanposts recently about how ridiculous Greg's rebounding per minute numbers are.  Here you can see some names that pound hard.  Really hard.  Also, I'm sure you're grinning that Dwight Howard's name is on this list.  I caught you, didn't I? 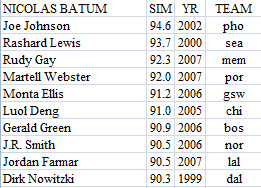 KP2 says... even though Batum's production has not been outstanding this season, players who see so much action at age 20 have turned out pretty good. Hence Batum's list of comparables includes some pretty good players. Johnson or Lewis would suit the Blazers just fine, I suspect.

Ben says... If Sergio's numbers yesterday didn't cause you to jump up in excitement, how do you like these apples?  Sure he needs to buy a new jumpshot at a garage sale this summer but that list is ridiculous.  How appropriate that Martell winds up on this list too.  But keep in mind that no one scored above 95. 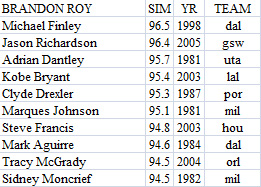 KP2 says ... The only surprise amongst Roy's similar players is that they tend to be bigger players like Dantley and Aguirre more than combo guards like Francis. I figured we might see more of the latter because of Roy's role as an "initiator" on offense. Otherwise, this group is further confirmation of Roy taking the next step in his development this season.

Ben says... Boom goes the mind.  Even with the abundance of big time names, I think we can say with certainty that Brandon is charting to eclipse nearly all of them. Another great reminder of what a special player Brandon is already, in just his third season.