Share All sharing options for: Kevin Pelton's Stat Bomb For Your Blazer Brain

You guys should know KP2 by now, but if not, Kevin Pelton is one of the kinky young minds behind Basketball Prospectus.  I recently realized he also runs the best-named WNBA blog in the history of ever.

KP2 does a lot of complicated things like adding, subtracting and, especially, dividing numbers to help provide insight into what is really happening when 10 large men run around in a rectangle and put a sphere through a ring.  He calls this mathematics "APBRmetrics" and recently I asked for his help to put these stats to work for Blazers fans.

KP2, really nice guy that he is, happily obliged.  He went all out here and I hope you enjoy his work.  And guess what? He will be attending Free Darko night!  So if you're a stat nut you will be able to say hello and maybe even get your TI-86 graphing calculator autographed.

KP2 used to work for the Sonics and we share an affinity for Kevin Durant.  Recently, he casually mentioned in a facebook message that KD's "similarity" list includes Kobe Bryant near the very top.  KEVIN DURANT IS GOING TO BE THE NEXT KOBE... Well, no, not exactly. After I took a shower to cool down, I asked him to explain "similarity" to me.

Similarity, officially, is a comparative rating (on a 1 to 100 scale) between any two players from NBA history (1979-1980 on -- since the advent of the 3 point line -- and with a minimum of 250 minutes played).  For reference, KP2 says, "two identical players would score a similarity of 100. In practice, a score of 98 is virtually identical, 95 is very similar and anything below 90 is getting pretty sketchy."

So similarity ratings aren't going to guarantee or even predict a player's career path, but you can take any player and create a list of other players who had the most similar stats at this point in their respective careers.  So today's Durant (age 20) is being compared to Kobe at  age 20, not the current Kobe.  Make sense? You can then run similarity scores for any one player against EVERY player in NBA history and then rank them from most similar to least similar.  Sweet!

Similarity is a tantalizing piece to add to our own qualitative basketball observations, especially for younger players.  For Blazers fans, it can add a new dimension to our understanding of our ridiculously young roster... sure, Jerryd Bayless looks a lot like Monta Ellis when he came into the league, but what do the numbers say?  How similar, exactly, are the two players?  Is there anyone more similar to JB than Monta?  That's the type of question that similarity aims to answer.

So what does "similarity" take into acccount?  KP2 writes...

I use 13 factors, all standardized for league, to determine player similarity:

For a full glossary of his terminology, go here.

Lost by all the percentages, rates, and ratings?  Don't give up...

The main idea (for me) behind "similarity" is to froth at the mouth about the potential of young players.  If you don't care about digging into how the math was derived, do what I did:

The Results
KP2 ran similarity scores for 11 Blazers.  Today, I'll post the reserves results.  Tomorrow: the starters.
In the tables below, you'll see each Blazer sub at the top, followed by their 10 most "similar" players, their similarity ratings, which year of their career is being measured, and what team the player was playing for.
After each player, KP2 added a (serious) commentary and I added my two pennies. 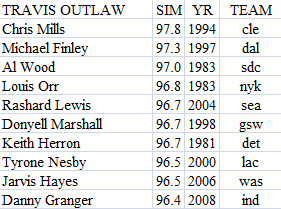 KP2 says... Outlaw has the highest similarity scores on the team, which is noteworthy in that his skillset is fairly common. What does set Outlaw apart from many of these players is his ability to play power forward; guys that moved to become small fours like Lewis and Marshall generally tended to develop better. Marshall was a better rebounder, but he's a pretty good role model.

Ben says... What's funny is that no one on this list is nearly as polarizing as Outlaw except for Rashard, and that's because he signed for A-Rod money. I wonder if back in the day Louis Orr had an "AnnTheFan" that went around defending his honor via USPS or telephone.  The telephone was invented in 1983, right? 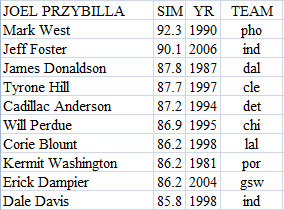 KP2 says... Przybilla comes out with lower similarity scores because of his off-the-charts two-point percentage. Przybilla is making twos at a rate 4.1 standard deviations above league average. The highest standardized two-point percentage for any player with at least 1,000 minutes played dating back to 1979-80 is West, who was +3.6 the previous season.

Ben says... Clearly this doesn't account for schoolgirl crushes because Przybilla dominates the rest of this list in that category. Although seeing Kermit Washington's name reminds me of that great vignette from "Breaks of the Game" where Halberstam reveals that Kermit was so shy around his future wife that they would silently read books together in his dorm room and call that a date. 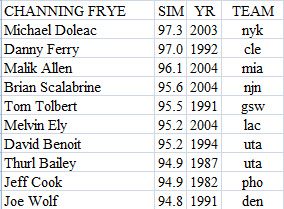 KP2 says... Not exactly a list I'd be in a rush to distribute if I was Frye's agent, although Doleac did get a four-year deal a year later as a free agent and Scalabrine got a very nice contract from the Celtics.

Ben says... I did my own math on Channing and discovered that his ratio of "fan love" to "actual production" is the highest EVER in team history.  Wait... have I used that one before? 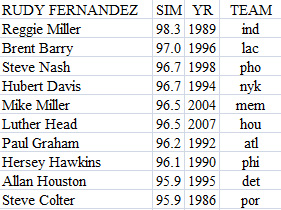 KP2 says... While Fernandez has a long ways to go to reach Miller's heights, you can certainly see the similarity in terms of their ability to shoot from distance and get free away from the ball. Even their builds are closely matched. The rest of the group generally is fairly predictable in terms of shooters with some size and ballhandling ability. Nash is an oddball, but remember he was a three-point specialist during his first stint in Phoenix who played a lot of shooting guard alongside Jason Kidd.

Ben says... Do you think Rudy has ever tasted bad gazpacho and done the Reggie Miller both hands on his neck thing in disgust towards the chef?  I would guess yes. 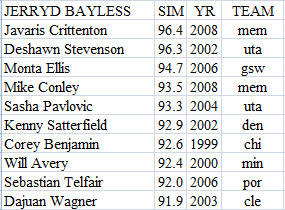 KP2 says... There's not much to take from this list given Bayless' limited minutes and the fact that he hasn't shot the ball nearly as well as he is capable of doing.

Ben says... Jerryd Bayless: so he's either an unarmed Telfair, an STD-free Wagner, or a Range Rover-driving Ellis. Yeah, I'm cool with that. 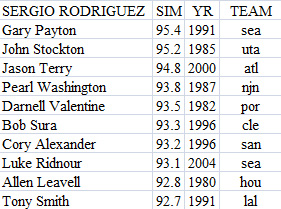 KP2 says... Um, really? Point guards often come out with a wide range of comparables because they tend to develop more slowly than other positions. Rodriguez's group takes this to another level; a couple of Hall of Famers at the top, then a host of journeymen down a little lower. Supporters and critics can both find something to take from this list.

Ben says... I saved the most contentious, and possibly most revealing (?) results for last. A great reminder of how young (and little-used) Sergio still is and how efficient he has been passing the rock in short minutes.

Check back tomorrow for the starting five!