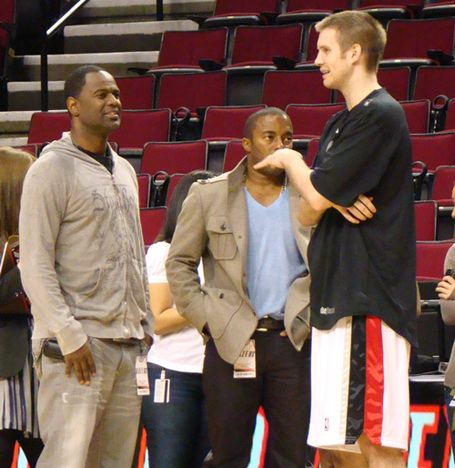 Most pregame sessions, you can spot Shavlik Randolph running up and down the Rose Garden stairs like he's Rocky.  Occasionally you'll see him getting some shots up or chatting with a fellow Dukie (Shelden Williams, for example) if one happens to be in town for the night's contest.

What you generally don't see is Shavlik going up to the game's National Anthem singer, eyes wide, and engaging in a 10 plus minute conversation.  Then again, R and B star Brian McKnight isn't usually in town.

Shav made no effort to hide his fandom for McKnight before the game so, after he finished up a rare postgame TV interview (with Bayless and company teasing him throughout), I asked Shav about his American Idol.

Shav's face lit up as he gushed "HUGE fan. HUGE.  Brian is like ... the Michael Jordan of singers."  Shav then recounted some fond childhood memories in North Carolina growing up on McKnight.

This begged an obvious question: Was Shav willing to dedicate his best performance of the season (9 points and 7 rebounds in 8 minutes) to McKnight?

Shav responded flatly, "No.  If I woulda scored 40 points then I would dedicate that to Brian."

Hilarious.  It was great for a laugh and good to see Shav get some camera time as well.  When Shavlik Randolph is the center of attention postgame it's a guarantee things went according to the gameplan out on the court.

If you haven't guessed by now, tonight's game was a blowout 116 to 87 home victory over the Clippers.  The Clippers are not a good basketball team.

Nate on Blake: "I thought he was good. I think since he's been back I like the tempo we are playing at. We are pushing the ball, we are getting off to good starts, we are moving the ball, a lot of ball movement tonight.  He had 14 assists -- I didn't realize he had that many-- in the first quarter. 38 assists for the game. It starts with your guard. It starts with your point guard. Setting the tone for the way you want to play offensively and defensively and he's done that."

More Nate on Blake: "He knows where we want to go with the ball.  What we want to do.  He has some experience playing that position. He's shooting the ball -- when he's shooting the ball from the perimeter it opens up a lot for us offensively. He knows where we want to go with our early offense, the sets, getting guys into their sets and again he has experience playing that position. Defensively he does a good job of guarding and setting a tone defensively as well."

Nate on why Blake didn't play more in the second quarter: "I was just getting guys minutes. I think he had 2 fouls and we didn't want him to pick up a 3rd one.  I went with Bayless and Sergio just to buy some time."

Nate on whether Blake was in a zone with the assists: "Well, we hope that we are in a zone. Our last 3 games we've been 20 plus assists and tonight 38.  We are talking about the ball movement, we're talking about the execution that we are going to need going down the stretch.  When guys have open looks they can knock those shots down.  But it starts with our guys moving the ball."

More Nate on whether Blake was in a zone: "When the tempo is fast and you're running, the Clippers were switching and giving us some opportunities and we just needed to be patient and keep the floor spaced and take advantage of it. I thought our guys did that."

Nate on whether the team is clicking because Blake is back: "I think that's a part of it.  Having a starting guard back and getting guys back into their roles. Sergio.  Brandon with Blake and Blake with the first unit and Sergio with that second unit, they know the rhythm and we've been able to get back to that."

Nate on LMA: "That's what we want. I think he's one of the best runners in the league. When he's running the floor we are getting some easy baskets. Blake is finding him in transition.  They had cross-matchups tonight, they tried to put Novak on Joel so that left LaMarcus open on a miss or a made bucket.  They lost him a couple of times and he's been able to beat the defense down the floor.  He's a guy we are going to go through to establish the post position. He's doing a nice job of just dominating the paint, posting up as well as rebounding."

Nate on posting Brandon up: "What they were doing, the matchups we had, what I decided to do was put Brandon and Travis on the block and put Frye or Joel at the top, getting Joel a couple of touches with Novak, but they were double-teaming and we could put Travis in there, we had matchups with a lot of guys and I wanted the guys who made good decisions with the ball on the block. So we just posted those guys up."

Nate on Blake's record: "You're watching the game and I didn't really realize that until I heard it on the speaker that he had 14 assists.  I thought we were in a good rhythm but I didn't know all of the assists were coming from Blake. [laughter] That's good. That's the way we talked about we wanted to play, push the ball, keep the pressure on their defense. Get up and pressure them.  He did a nice job of getting us the tempo we wanted."

Nate on the upcoming road trip: "We did what we need to do at home.  Coming off the break we thought these were games that were very important, all game are important, but to get these games at home would be good and then now we know this is going to be a tough road trip, as all road trips are.  Going out here against Houston and San Antonio back to back. We start with Houston. We are doing some good things.  We'll hear about Greg tomorrow but we go in and we try to improve our road record."

Nate on the string of losses at Houston and at San Antonio: "We've got a lot of records like that. We've had to go in and break some of those records.  We'll try to start with Houston."