Have a question?  I will take your questions in the comments until 230 PM.

KP announces to the team that no trades have been made.

The team huddles for their traditional "together!" cheer. Tom Penn gropes poor Sergio. 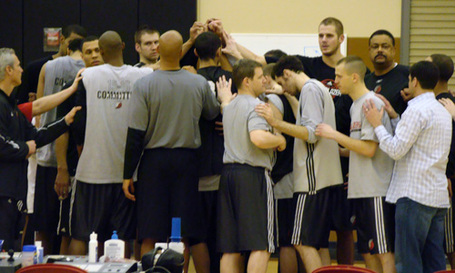 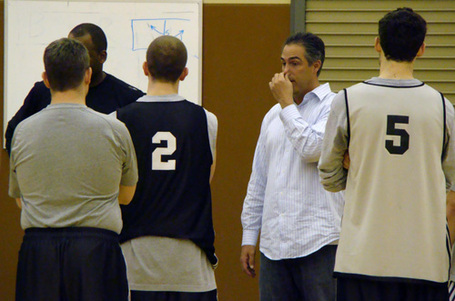 Big team news of the day: Greg is out for tomorrow night's game. Also out for Sunday.  His knee is still swollen according to Coach McMillan but Nate said surgery has not yet been discussed.

Practice opened earlieir than usual, about 11:30AM or so and was already underway by the time I got there.  The team was going through 5 on 5 work, particularly running pick and rolls and defending against them, from what I could gather.  Again, my head was all over the place because of the trade deadline so my apologies.  I will be back at it tomorrow, I promise.

My big takeaway from today is this: not moving RLEC is a clear sign that the team believes the economic situation for rival organizations will only continue to get worse, with the implication it could possibly get much worse.

I am absolutely disappointed and surprised that we did not make an acquisition given how wide open this season seems to be; KP fully acknowledged that he will take some heat for not making a move.  He also very carefully pointed out that as the economy worsens, the Blazers position only becomes stronger and they will turn their attention to the offseason.

KP's view is pretty clear: why take on any new long-term, big dollar contracts if you are getting signs from other teams that those big dollars could go much, much further during this summer's free agency or, perhaps, into next season as well.

Some questions to ponder...

I think we are looking at this off-season as an era where teams see increased leverage in negotiating with players and, more importantly, where rich teams with flexible salary cap situations get even greater leverage when competing against poorer or less flexible teams for players.

To repeat: the takeaway implication from KP today was that if you think this is a buyer's market now, just wait until this summer.

With that said, the Blazers are tantalizingly close to making a big push this season.  There's some serious heartbreak knowing that the team is keeping RLEC in the short term.  The only comment from KP that struck me negatively came when he said that he wanted to avoid making "a huge mistake" and that the risk of making a move and jeopardizing this team's playoff chances was a factor in his decision-making process.  First: I would hope that he had enough good offers (he said he had a lot of offers) that the risk he's talking about would have been minimal. Second: the last thing that I want to see in this world is a gun-shy KP.

In my season preview this year, I wrote that the summer of 2008 could be the time that people look back on as the time this team took off with real potential.  I'm starting to think that I might have jumped the gun by one summer.