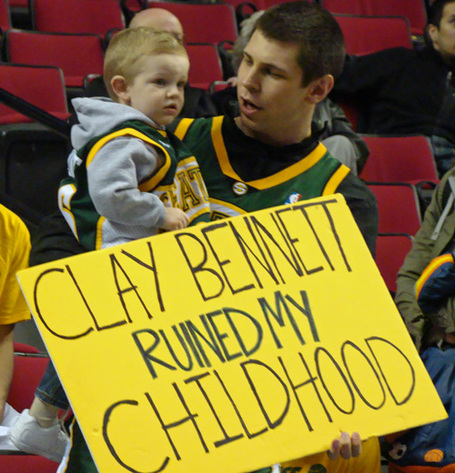 Execute a relatively simple gameplan at home against a relatively bad team that is on the second half of a back-to-back and the win should come easy.  That's what the Blazers did tonight as they got solid contributions up and down the roster and coasted to a 106 to 92 blowout home victory against the "Oklahoma City Thunder."

The game was almost lost late in the game, with the Blazers clinging to an 18 point fourth quarter lead.  The crowd seemed uneasy, either because of Chalupa induced psychosis or because they were fearful of coughing up another home win.  Thankfully, Nate McMillan wisely re-entered Brandon Roy into the lineup with 5:30 remaining.  Within seconds, hearts stopped beating rapidly as the crowd realized that Brandon, LaMarcus, Jerryd, Travis and Joel most likely had the fortitude to hold off a last gallant effort from the "Thunder."

After the game, Nate recounted the harrowing final minutes, "It's five minutes to go in that game. That game is not over yet.  Put the game away.  They got it down to 11 or 12.  That game is not over."  Scott Brooks appeared to feel differently, pulling Kevin Durant with 3 minutes remaining given the scoreboard carnage, and much of the crowd seemed to express their agreement with Scott Brooks by leaving the stadium.  Nevertheless, Nate rode B Roy, LMA and Trav until the final buzzer, when the streamers dropped on a nail-biting 14 point victory.

The Blazers needed multiple game balls after this one, thanks to a sturdy, effective night from Greg (16/10/3 on 8 of 10 shooting), 21 point from Travis, and a solid 12/8 from Jerryd Bayless, who narrowly avoided a catastrophic injury on a mid-air collision.  The concern on Travis's and Brandon's face was very, very real as they motioned for him to stay down on the ground after getting back-swiped on a transition layup.  Much to everyone's relief, Bayless hopped back up on his turtle shell and continued on with the game.

All that stands between the Blazers and a stress-free vacation is tomorrow night's matchup with the Golden State Warriors.  After what happened the last time the Blazers went down to Oakland, one guesses that the coaching staff is hoping they can get the team to execute the gameplan one final time before the break. 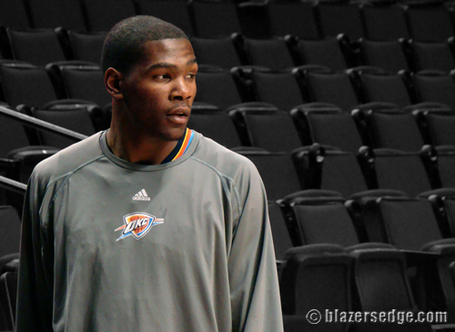 Nate on the result: "We got offense. We were able to score. We did a much better job transition wise getting back and not giving them points in the paints. 32 tonight, I think they had 54 last game. It was just a track meet the first time we met them."

Nate on the pressure defense: "We did a better job there of just getting up. I thought our defense, we took away the paint.  Which really forced them to shoot the ball from the perimeter. We contested the shots, they missed some shots that they made last game. The big key tonight was transition defense and keeping the paint tight. Not giving them lanes to drive.  The only place we didn't do well was rebounding the ball.  Westbrook, their guards are very good rebounders. I thought he kept them close by giving them 2nd and 3rd opportunities.  We were ball watching and just anticipating that the bigs would get all the boards, as opposed to recovering to the paint."

Nate on Greg's game: "Well I like the fact that when he was open we got him the ball. He made some good moves but he got a lot off the boards.  He can do that when we're penetrating the ball, if they leave him, he's done a nice job all season long offensive rebounding, tonight he was able to give a few of those easy ones."

Nate on closing out pre-all star break hard: "I like what we've done. Protecting home court, we got these last two before going into the break. That was our goal. We were able to do it."

Nate on whether he's amazed by the rookies' production: "I hear that, but I don't. I really don't. I focus on, I know we gotta get better. The schedule is gonna get tough. Going down the stretch, we're going to have to be sharper. We're doing some good things, we've put ourselves in position to have a shot at the playoffs, that's our goal, our guys each night, will just continue to try to improve with the players that are out there. We've had some guys go down, hopefully we'll get everybody back and healthy.  I think our young guys have stayed aggressive, they've made some mistakes but for the most part they've been good enough for us to win some games."

Nate on whether Bayless is developing as a point guard: "Well, he's working on it. Making decisions.  Time/score situations.  The one thing he does well is he's aggressive.  Seeing the floor.  All of that, he'll get better with time on the floor."

Nate on how Greg is doing handling the officials: "Just adjusting to the officiating.  During the course of the game officials call things different. What he has to do is adjust to those guys. What we don't want him doing is picking up those cheap fouls, going over the back.  When he rotates early he normally makes plays. Tonight he took a charge, had a few blocks. That's about rotating early, moving your feet and getting yourself in position."

More Nate on why Brandon was in at the end: "We tried to get him out with 2:25, the clock was running.  We were just in Dallas and they pulled the same thing. We coach to win the game.  Worry about tomorrow night, tomorrow night. You try and get guys out but we don't play with games like that."

Nate on Brandon's development: "He's gotten better. Each year you hope from your key guys that they show improvement. He's gotten better at getting to the basket.  Either playing against the top defenders.  He's increased his scoring.  That is something that you want to see each year, it's an area of their game that they improve, whether it's perimeter shooting, getting to the free throw line, creating shots for teammates.  He's been able to do all of that."

Nate on Brandon's passing: "Play the game.  If they trap you, then you move the ball.  If they are giving you single coverage, he feels he has an advantage and we want him to take the ball to the hoop."

Nate on ways Brandon can still improve: "Oh yeah, oh yeah.  3 point shooting.  Getting to the free throw line.  Oh yeah. He has some room where he can continue to improve. I don't think he's peaked yet."

Nate on Rudy's second half energy: "Rudy makes some big plays for us.  Shooting the ball.  He sees the floor well. He was able to make some plays.  He got the crowd into the game and gave us momentum and we rode that for the fourth quarter."

Nate on how Rudy affected the game: "Yeah, I thought it did. A couple of his plays going to the basket, he went to the basket hard. He had a pass underneath to Travis. That got the crowd into the game and we rode that." 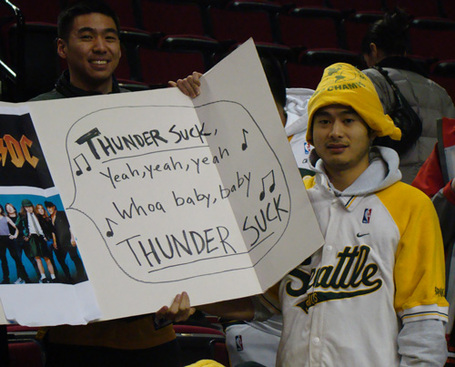 Save our Sonics: pregame. 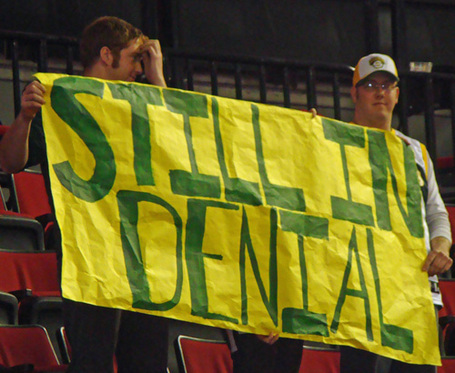 Save Our Sonics: postgame.