Share All sharing options for: Game 51 Preview: Thunder vs. Blazers

After doing a Sonics memorial for last week's preview of the first meeting of the year between the Blazers and Thunder I promised Oklahoma City an honest preview this time.  So I'm going to try.

A Look at the Thunder

Despite the 13-39 overall record in a generally sad-sack season Oklahoma City does have a couple of big names on the roster worth noting.  They are "Kevin" and "Durant".  As in, "At 25.5 ppg, 48% shooting, 6.6 rebounds, 2.8 assists, 7 free throws per game, and 86% foul shooting Kevin Durant is showing himself to be one of the best young players in the league."  Also, "Kevin Durant plays in Oklahoma City, so nobody notices."  Seriously, if this guy played on either coast he'd be mentioned in the same sentence with potential league MVP's.  He's the next T-Mac.  Heck, he's probably the current T-Mac without the injuries.  He is worth the price of admission.

The other two guys you have to watch out for are Jeff Green, a 6'9" athletic small forward with a nice all-around game and Russell Westbrook, the point guard nouveau who has discovered a vicious scoring streak in the last month.

Between those three young, hot players Oklahoma City is capable of putting up points.  They've been over 110 in 4 of their last 7 games.  If you let them get rolling you're going to be treading water against their scoring all night.

The things the Thunder struggle with are...well...pretty much everything else.  They draw a lot of fouls and they're decent rebounders.  If you don't come with energy they will beat you to the spot in both aspects.  But they're not great defenders themselves, they don't intimidate in the lane or on the wings, they turn the ball over a lot, and they usually find a way to lose if any are available.  These are all hallmarks of a team depending on young players and retreads.  Their big man lineup looks like the 22nd round of your local fantasy draft.  That's not a slight as much as an admission that the rebuilding project in OKC has a long way to go yet.  You have to watch out for Earl Watson and Desmond Mason every now and again, with Watson having the hot hand lately.  Everybody else needs a lot of space to score.

The Thunder are a pretty good three-point shooting team but they don't take them often.  It's still not a good idea to leave them alone out there.  Durant and Green will jack it and hit it.

Keys to the Game

There's really only one key.  When the Blazers take the court they should each go up to their counterpart and repeat after me:

(If you don't know how to do it, ask one of the guards.  You've got a decent chance of finding one who can tell you exactly how to deliver the line.) 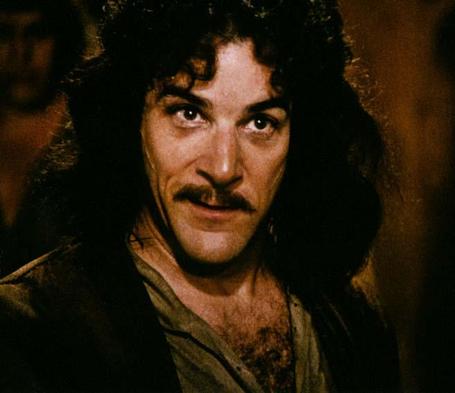 Hello. My name is Inigo Montoya. You killed my win streak. Prepare to die.

That's it.  Look 'em right in the eyes and say it.  If the Blazers aren't out for revenge tonight, if they don't play with enough energy to put this team away and keep them there, nothing I explain is going to make a difference.  Losing to the Thunder at all was a bad idea.  Losing to the Thunder on your home court (OKC road record:  3-21) in your second game against them in a week would require a full-on gut transplant.  Greg Oden, Lamarcus Aldridge, Jerryd Bayless, Brandon Roy...these guys should have a field day with a little effort and intensity.  At some point during this game we should be thinking, "This is (or is going to be) a massacre."  If we don't get that opportunity tonight I'll be surprised and disappointed.  Get that loss back with interest.  End of story.

Check out the Oklahoma City perspective at WelcometoLoudCity.