Portland Trail Blazers General Manager Kevin Pritchard conducted an interview with John Canzano on 95.5FM this afternoon. Here are some quotes from the interview. Podcasts for Canzano's show can be found here.

"I've been through some tough times. We all have. I believe this is where your character comes out."

"[All of these injuries} has been something I've never quite been a part of. This organization has a lot of great people. We want to continually work hard at what we do... we want to come out better on the other side. We have some injuries but it's not the end of the world. Our hearts go out to Mr. Allen and Maurice Lucas every day more than anything... I want this to cement our team and get them closer together. I want our guys to overachieve, play our tails off."

"The one thing I know for sure is that this is a predatory league. One thing people will try to do is look at our roster and say what can we get off of it. We're not going to sacrifice anything in the future for today. Does that mean a trade can't happen? It can happen."

Are there trades out there right now?

"Through the tough times, we stay calm waters.

"Jerryd Bayless is coming in and playing well. Dante Cunningham is going to be coming in more. We're going to have to overachieve."

"There's no quick-fixes in this business. There's not."

Are the playoffs a goal?

"It would be huge and a complete testament to the character of this team. And we've challenged them with that."

"Brandon put the team on his back against Houston. We're going to need that a lot. Him and LaMarcus."

Who needs to step up?

"The one I'm most excited about is Jerryd... he's absolutely obsessive with his workouts. I have a lot of faith in him because he's prepared himself."

"Dante is a bunch of energy and he makes a lot of hustle plays. That's what we need.'

Has Jerryd Bayless asked you for a trade?

"Never. Not one time has he asked for a trade."

"We really miss Nic Batum... What he was able to do as a 19 year old last year... We need a wing defender to guard the Kobes and the LeBrons... we probably miss him more than anything."

Second-year Spaniard will be sidelined 4-6 weeks

Fernandez, 24, will miss 4-6 weeks as a result of the procedure, which relieved pressure from a nerve root in his lower back that caused pain in his right leg.

"The procedure was successful and we can now turn our attention to getting Rudy healthy and back on the court," said Pritchard. "He's been under a lot of pain and we look forward to Rudy returning healthier than ever."

Fernandez appeared in Portland's first 20 games this season, averaging 8.6 points, 2.7 rebounds, 2.2 assists and 23.3 minutes. He leads the Trail Blazers and ranks among NBA leaders with 1.55 steals per game.

Rudy Fernandez will be sidelined 4-6 weeks after microdiscectomy today to relieve leg pain caused by a nerve root in lower back.

"[Rudy Fernandez] can get going right away on conditioning... he can do some things pretty quickly. He can swim, it's more the impact of running and jumping [that might take longer]."

Fernandez, 24, will undergo a microdiscectomy to relieve pressure from a nerve root in his lower back that is causing pain in his right leg.

A timetable for his return will be determined after the procedure.

More details on this in about 7 years. I just need to get my MD degree and then I'll be back to explain this.  Seriously, more details to come shortly.

Update (11:24AM): Here is some information from Dr. Peter F. Ullrich, Jr., MD on Spine-Health.com regarding microdiscectomy surgery that seems to align well with the Blazers' statement.

In a microdiscectomy or microdecompression spine surgery, a small portion of the bone over the nerve root and/or disc material from under the nerve root is removed to relieve neural impingement and provide more room for the nerve to heal.A microdiscectomy is typically performed for a herniated lumbar disc and is actually more effective for treating leg pain (also known as radiculopathy) than lower back pain.

Impingement on the nerve root (compression) can cause substantial leg pain. While it may take weeks or months for the nerve root to fully heal and any numbness or weakness to get better, patients normally feel relief from leg pain almost immediately after a microdiscectomy spine surgery.

Please note this is general information and not necessarily applicable to Rudy Fernandez specifically.

Some spine surgeons restrict a patient from bending, lifting, or twisting for the first six weeks following surgery. However, since the patient's back is mechanically the same, it is also reasonable to return to a normal level of functioning immediately following this spine surgery.

The success rate for microdiscectomy spine surgery is approximately 90% to 95%, although 5% to 10% of patients will develop a recurrent disc herniation at some point in the future.

Here's a video from Dr. Scott Boden of Emory Health explaining the surgery in pretty good detail. It is described as an outpatient surgery meaning the patient often can leave the hospital on the same day as the surgery or, at worst, spend one night in the hospital.  There are even video clips of a patient playing basketball.

Pakzaban has posted a video "demonstrating a lumbar microdiscectomy operation performed through a 2 cm incision on the back for treatment of a herniated lumbar disc."  Enjoy.

Update (12:06PM): This is how you fail at twitter. KGW reporter Pat Dooris erroneously tweeted that Rudy Fernandez was done for the season.  Minutes later, he retracted. Here's his official account.

Given the circumstances, an official apology from KGW to Rudy Fernandez, the Blazers and its fans is in order. 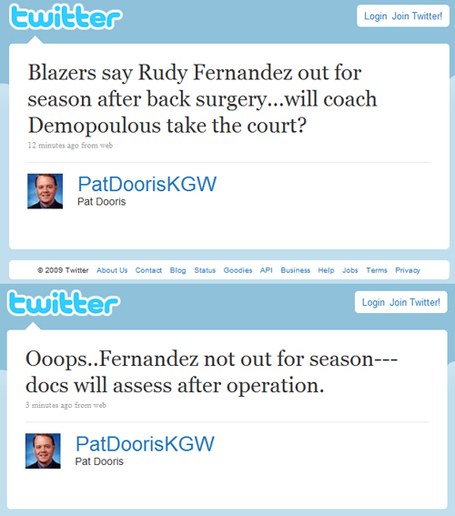 PS Thanks to Hurrakane212's quick-trigger in the fanshots as well.