At the 7:45 mark of the first quarter of tonight's Blazers vs. Rockets game, Blazers center Greg Oden injured his left knee while contesting a runner by Rockets guard Aaron Brooks.  Oden came to the ground clutching his left knee and was writhing in pain.

Immediately Rockets training staff came to Oden's attention and, soon after, Blazers staff, including Blazers' team doctor, Doctor Roberts, came to his side.  A towel was used to cushion his head against the court floor.  The Rose Garden crowd briefly chanted "Oden! Oden!" in support but then came to a quiet hush as Oden continued to lay on the ground.

The Blazers took a full timeout and a stretcher was called in to transport Oden off the court.  Joel Przybilla replaced Oden in the game.

Oden had microfracture surgery on his right knee that caused him to miss the 2007-2008 season.  Again, the injury tonight was suffered on his left knee. 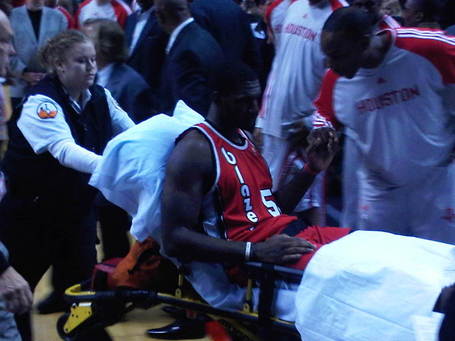 Update (7:31PM): Oden is in the Blazers locker room.  Further information should be available shortly.

Update (7:52PM): Brian T. Smith of The Columbian just told me that, according to two sources close to the situation, Greg Oden has been taken to the Rebound Clinic and will undergo an MRI on his left knee. Here's a link to Smith's blog.  Give it a click in appreciation of that information.

Update (8:14PM): Joe Freeman of The Oregonian has posted an update that includes another picture of Oden taken by Bruce Ely.

Courtside photog just showed me close-up of Oden kneecap twisted way off to right side. Looks like either a dislocated kneecap or torn quad

I've seen similar pictures. I don't want to speculate but it did look gruesome.

Update (8:23pm): The Blazers have informed the media assembled in the Rose Garden that an MRI revealed that Greg Oden suffered a fractured left patella and is "likely out for the season." Blazers General Manager Kevin Pritchard will address the media after the game.

I've got an e-mail in to Prospectus injury expert Will Carroll for more, but I found one other NBA player who suffered a fractured patella-then-Washington Wizards forward Jarvis Hayes, who was injured in late December 2005. Hayes did not apparently initially undergo surgery, but then had the procedure in mid-February 2006 when the patella failed to respond to non-surgical treatment. He missed the remainder of the season, but returned to play 163 out of a possible 164 games the following two seasons.

Update (8:48PM): Here's a link to video of the injury courtesy of The Big Lead. Watch the video below.

For all the bows taken in Portland, Kevin Pritchard's legacy will likely be reduced to this: He picked the wrong player in the '07 Draft.

Although, he does add...

It's all sad and unfortunate for Oden, who doesn't deserve this. He's a real gentleman.

Update (9:20PM): Matt Moore on Hardwood Paroxysm has some links to more information about the injury.

I've covered countless players in 20-plus years in journalism. Greg Oden is one of the best. Feel awful for him getting hurt again.

Here's a larger picture of the injury, courtesy of Sabian404 and Blaze of Love on Twitter. Caution: This image is gruesome

Oden: "I'm obviously disappointed having worked so hard to get to where I was," said Greg Oden. " This is a setback, but I'll be back.

Oden: "It's in God's hands now. I want to thank the fans, my teammates and everyone in the Blazers family for all of their good thoughts."