Thanks to his recent Achilles surgery, Nate McMillan rides on this wheelie cart when he's not on crutches. 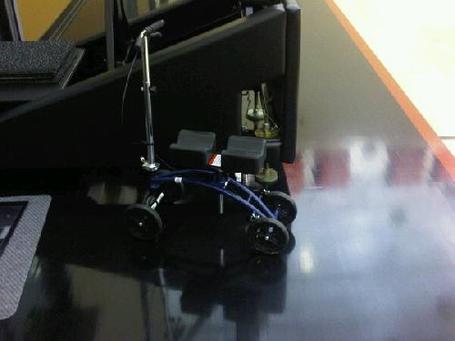 McMillan spoke today about the "slippage" he has seen from the team's effort and execution.  "My leg is in this cast because of slippage," McMillan said, prompting some light chuckles from reporters. "No, seriously," McMillan continued, "It was slippage then... communicating on defense and setting screens and talking and sprinting out and all of those things we're talking about now, we've got to do."

McMillan has recalibrated his goals for the season: he wants to make the playoffs. He also seems to have come to terms with the fact that Greg Oden is out for the season.  I suppose a week watching your team struggle through a road trip on TV will do that.  For the latest on GO, click on this morning's update.

After practice today, Jerryd Bayless was adamant in repeating his earlier statements on twitter, steadfast in saying that he was not referring to his teammates after the game in Milwaukee.  Jason Quick tracked him down after practice and they spoke briefly.  After that conversation, Bayless told Brian T. Smith that the incident had been a "miscommunication."

Much more, including the quote below, from Brian T. Smith here...

Soon after the media session was complete, Bayless showed some real class in tweeting...

J. Quick didn't do anything wrong.. It was an accident and bad communication between both of us

Drama aside, Bayless saw his playing time ramp up a little bit on the road trip and Nate McMillan spoke at practice today about the team's need to attack defenses more aggressively.  Clearly, that's good news for Bayless.

Here's a quick question and answer I did with Jerryd Bayless at practice today.

Blazersedge: Have you talked to Nate about your role in the last few weeks?

No, I haven't really talked to him about my role. When he puts me out there I'm going to try to do the best I can to help this team. Any given circumstance. If he plays me at the one, two, three, four or five. I'm just going to do my best to try to help this team win games.

Blazersedge: Some people believe you'll have more success if you continue to play at the 2 spot instead of the 1. Would you agree?

No, I don't think so. The thing is, it's whoever gets it, really goes, with me and Andre or me and Steve or whatever. Last year when Steve was out I think I had a lot of success there too. Whatever this team needs like I said, right now I can't really be picky about where I play. I'm not in that position. Hopefully we can get better, try to win some more games.

Blazersedge: Back during training camp we talked about how you saw the point guard position as a competition between you, Steve and Andre.  How has that competition shaken out? How do you feel you're doing compared to those guys?

Blazersedge: You seem like a different player from last year. Your shooting percentage is way up.  Your turnovers are down.  Nate really hasn't talked to you about that during the last month?

Nah, we haven't really talked about that. He told me 'good game' after the Houston game. Today is the first day I've seen him. The Houston game was the first game that Rudy was out. So it was the first game I really played besides that stretch I was playing one. I think I did well when I was playing one for a little bit, when they went to the three guard lineup and I was coming off the bench being the backup point. We haven't really talked.

Blazersedge: How do you feel about playing in a three guard lineup compared to a traditional two guard lineup?

I just like to play, man. I love basketball. Right now I can't really be choosy about my situation. Whenever I get on the court, whether it's one, two, three, four or five, I'm going to try to contribute to this team.

Blazersedge: Last week there were rumors that you had approached Kevin Pritchard for a trade. Did you?

Blazersedge: Did your agent or anyone else approach Kevin Pritchard on your behalf?

Not that I know of.

Blazersedge: How do you think something like that gets started?

Probably because I wasn't playing. Someone wanted to write it.

Blazersedge:  What's your reaction when you read people writing about your facial expressions during games?

I think it's just me being competitive. I don't think it's really 'grumpy.' It's just an intense look. When I get in there, I'm trying to win at any cost possible. It's just me. I can't really change that.

Nate McMillan indicated at practice that he is re-evaluating the starting lineup.

I gotta look at everything. Certainly we're looking at that. I want to talk to the coaches more about it but we're a different team now. We're a different team without the two guys early -- Travis and Nicolas -- and we're certainly a different group without Big Greg and now without Rudy. We gotta find a way to get a group out there, maintain and win games and try and stay in this thing until we can get some guys healthy. So yes I'm looking at that.

McMIllan claimed to be looking at all positions aside from Brandon Roy and LaMarcus Aldridge but it doesn't take a rocket scientist to know that Nate McMillan is finally bringing himself to reconsider the starting point guard position.

Jason Quick first reported on 95.5FM last week that McMillan was looking at starting Andre Miller in place of Steve Blake.  He repeated that claim today, stating on Wheels at Work that he is receiving "strong indications that Andre Miller will move into the starting lineup tomorrow night."  Quick also stated that he expects Jerryd Bayless to receive "very much more" playing time. 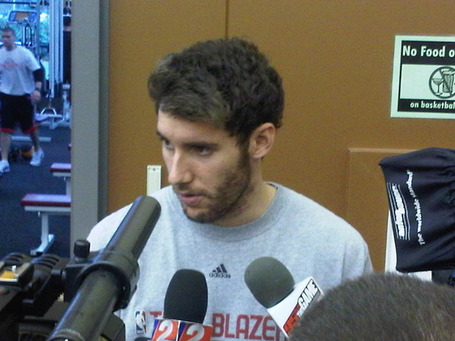 Rudy joined Nicolas Batum in attendance at practice today while Greg Oden and Travis Outlaw were not present.  Rudy reported feeling much better after his surgery and said all the right things about getting back as soon as possible to help the team.

Ira Winderman is reporting that the Miami Heat have released Shavlik Randolph.  Best of luck to Shavlik.