Asked  for his thoughts about his team's still-developing playing rotations after tonight's 97-91 loss to the Atlanta Hawks in the Rose Garden, Portland Trail Blazers guard Brandon Roy seemed to admit some confusion. "It's hard to watch [the rotations] because I'm playing," Roy said. "I can't really get a feel."

Rule #298,765 of the NBA: when your star 2 guard isn't completely comfortable with the players surrounding him during crucial stretches of a close game against a playoff team, that's a bad sign.

Why would Roy -- one of the league's most erudite players -- be confused?  Let's check the play by play...

During the last six minutes of tonight's game, these were the Blazers lineups that were on the floor, in order.

That's more than a lineup per minute down the stretch and more than a substitution per minute as well.  Indeed, in just those final six minutes, Nate McMillan made a total of 9 substitutions. He used LaMarcus Aldridge at both the 4 and the 5. He used Travis Outlaw at both the 3 and the 4.  He went with a small trio of guards and a big trio of guards.

It wouldn't have even been a late-game stalemate if not for an unexpected flurry from Travis Outlaw, who personally accounted for 9 of the Blazers' final 11 points on his way to 19 points for the game.  Crush Travis Outlaw all you want but tonight, in a big game, he did what none of his teammates could do down the stretch: make a field goal.

While the offensive rhythm and execution were obviously lacking, it was the Blazers' defensive effort that cost them this game, their second home loss of the season in three tries.  (Note: The Blazers didn't lose their second home game of last season until December 12. Today was November 3.)  They simply had no answer for Hawks guard Jamal Crawford, who put on one of the most memorable offensive displays in recent Rose Garden history, finishing with 27 points and 7 assists, highlighted by a spectacular behind-the-back pass in transition that led to a wide open Al Horford dunk. Hawks guard Joe Johnson chipped in 19 points and 8 rebounds, including two baskets in the final 2 minutes to help ice it.

But Crawford was the difference-maker, beating his man off the dribble, sinking jumpers, making all nine of his free throws. The Seattle-area product zigged, zagged, dominated.  As McMillan summarized post-game, "Crawford went crazy."  Yeah, pretty much.

Crawford's explosion wiped out a fast start for the Blazers, who sank more than 55 percent of their shots during the first quarter and held a commanding 25-15 lead after one period.  What happened after that?  Well, the Blazers started taking more difficult shots -- lots of three pointers... way, way too many three pointers (21 in total) -- and the Hawks started to break the Blazers down off the dribble, setting up easy buckets at the rim.  As the game wore on, both trends continued in exactly opposite directions: the Blazers took more difficult shots and missed them, the Hawks took easier shots and made them.  This chart shows the Blazers' field goal percentage free fall as the game went on and the Hawks' steady climb through crunch time. 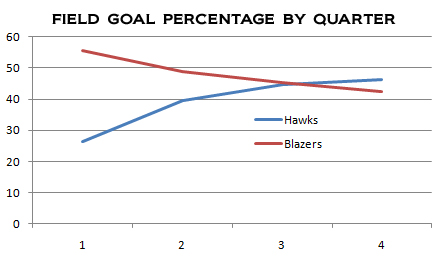 Like the confusing rotations, the home loss and lack of execution on both ends left Brandon Roy scratching his head.  Asked if the team had entered the season taking things for granted, Roy responded, "No, I don't think so. What we didn't expect is that we were going to have to do it all over again. I think we thought we were going to pick it up where we left off and that's not the NBA. It's new to me, I'm sure it's new to a lot of guys in here... A lot of things changed and I don't think we've fully grasped that fact."

Obviously adjustments are in store for the Blazers, who are now 2-3 on the season, already 2.5 games behind of Division-leading Denver.  Hopefully those adjustments start at the end: crystallizing a late-game philosophy that doesn't resemble a lacrosse match with mass substitutions conducted on the fly.

One of Nate McMillan's favorite phrases is: "We know what he can do."  McMillan uses this phrase to describe nearly every player on his roster, an acknowledgment of their individual skills and his understanding of the player's fit within the team dynamic.

With the possible exception of Andre Miller, Nate McMillan knows what the 9 guys in his rotation can do.  Yes, it's early.  But it's time to let those guys do what he knows they can do.  And that's not checking into and out of games.

With the exception of a few nice steals that turned in to baskets on the other end for his teammates, Rudy Fernandez continued to struggle mightily.  Every shot attempt was a 3 pointer and he connected on just one of five.  Although Fernandez was more aggressive in attacking the defense off the dribble, he looked to pass out to shooters rather than take a mid-range or closer shot of his own, almost without exception.  Self-confidence problem?  A strategy from the coaches?  Lingering back spasm issues? All of the above? None of the above? Anyone?

If there's a single player that seems put off by the roster juggling it is Rudy Fernandez. In theory, he should be one of the most consistent contributors.  In practice, through five games, he's been anything but.

Not a dominating performance (20 points/14 rebounds) but a very promising one: he didn't seem to show any ill effects from his knee contusion before the game during his warm-ups or during the game.  He played hard, he played heavy minutes, he ran the floor and he hit the glass.  Hopefully the soreness is manageable and he brings his A+ game on Friday.  It will be needed.

Credit the Hawks for doing an excellent job taking away Roy down the stretch. Although Travis Outlaw stepped up fairly admirably, the entire offense looked disjointed without Roy's ability to break a defense down and get to the free throw line to stop the clock.  Perhaps the topic of a future charting.  Roy admitted that he himself would have to watch tape of tonight's game to get a full sense for why his shots were limited in the fourth quarter.  Roy was just 1-3 in the game's final 12 minutes.

The two things you've got to do to give yourself a chance to win games. One: you've got to shoot the ball. You've got to knock down shots when you get shots. Second thing, we've got to play defense. Perimeter, isolation. We've had in our games, every game we've played other than Oklahoma City, a wing, one of these wings have had big nights. Tonight it was Crawford coming in with 17 points at the half. He ends up with 27 for the game. Basically you're out there by yourself and you've got to guard. We broke down and they were able to get in the paint. Score over the top, get in the paint, get layups with our bigs stepping in to get help.

Did you get outworked tonight?

I mentioned that. I feel like our level of play has gotta go up. To win we're not playing as hard as we need to, to win ball games. I did feel that.

Surprising to be outworked at home?

Regardless of where you are you've got to work. I've really felt that our level of intensity needed to be better. But pretty much all the games, I thought in Houston they out-scrapped us. They were quicker. We did some good things in Oklahoma City. Tonight we played but to win games in this league you've got to work. That's not something I've had to say to this group in the last couple of years.

How surprising is it that effort is an issue?

Again, I haven't had to say that to this group in the last couple of years. My first year here, my first year or two, we talked about effort. But you know this team... that was just a known. That we were going to get that.

What do you attribute that to?

Why start Joel for the second half instead of Greg?

Because Greg was getting.... I wanted to stretch out that game, not get him in foul trouble. Get Joel in and get Greg in down the stretch. We were able to do that for a few minutes and then he picked up his 4th foul. I was trying to stretch out the game.

It's not in the sense that points in the paint comes from not just posting up but from penetration. When we talked about attacking the basket, it's not just post ups, it's from penetrating the ball. And right now we are settling for a lot of jumpshots as well as not going to the basket. They won the free throw line also. We only had 16 free throws tonight. We're a team that's averaged 24.

Crawford went crazy. He came in and he was that spark off the bench. We had no answer -- we could not stop him. That second, that first and second quarter, he had 17 in about 12 or 14 minutes. That gave them the momentum.

Change rotations or mix things up?

Regardless of when you go in the game, you've got to defend.

Settling for jumpers when possessing lead. How to stop that?

We've been a team that attacks the basket. We've got guys that can shoot the ball. We're not being aggressive getting to that basket. At times we're settling for the jumpshot. And pulling up. And not putting our head down and making strong moves to the basket.