Depending on which side you listen to, the hot topic from yesterday's Blazers versus "Thunder" game was either:

Given Martell Webster's inconsistent defense in the past and Kevin Durant's proven ability as a shooter and scorer, I will admit to initially siding with the "Thunder" interpretation: Durant had an uncharacteristically cold shooting night and, essentially, that cost his team the game.

But given how hard Webster worked in defending Carmelo Anthony last week, and the importance of Webster's development on the defensive end, I thought a closer look at the Durant/Webster match-up was in order.  So, much like last week's charting of Greg Oden's touches, I went back through the game tape and charted every "Thunder" offensive possession with Kevin Durant in the game.  This time, I made a note of who was guarding Durant, the result of the play (if he shot the ball, where did he shoot from and how was he guarded.. if he didn't shoot the ball, where was he in relation to the play) and looked for any other stand out moments from Webster defensively.

The results were particularly interesting.  Here's a link to the full size chart. Here's Durant's shot chart for reference, courtesy of ESPN. 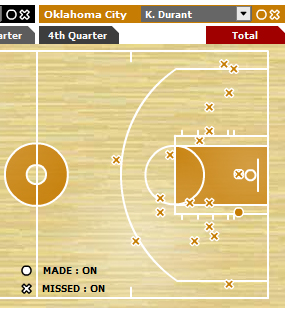 My full charting is quite long and it gets repetitive so let me boil down the results.

Click through for a shrunken down version of my charting results or click here to read the full size version. 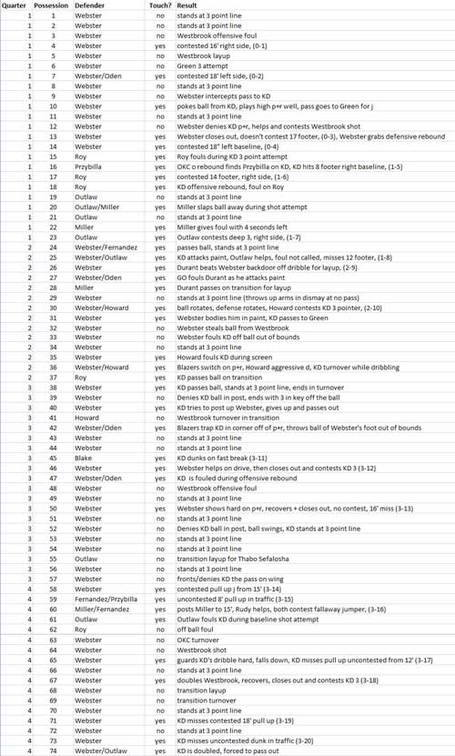