Across the city, loyal Portland Trail Blazers fans will gather around candles to listen to a professional basketball game on the radio. 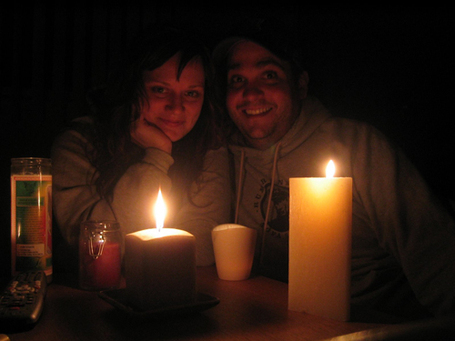 Tonight, the Portland Trail Blazers (2-0) face off against the Los Angeles Clippers (0-1) at the Staples Center in their third of eight preseason games.  Despite the game being played in one of the world's largest media markets it will again not be televised.  Tonight's Lakers and Warriors game will be televised in high definition.

The game tips at 7:30PM and you can listen to Brian Wheeler and Antonio Harvey on 95.5FM.  They both do a great job and are big-time lifesavers this month.  Tone even tweets during the games sometimes.  Pretty sweet.

The Portland Trail Blazers' 2009-10 season has yet to even officially begin. But some ambulance chasers are already beginning to worry whether the team's coach and general manager can put together the pieces they've assembled to form a puzzle that eventually resembles an NBA championship.