There's been a bunch of talk today about Greg Oden's offense, or lack thereof, in last night's game against the Houston Rockets.

My first inclination was to credit Chuck Hayes, who is known for doing a great job of playing bigger than his size, getting under bigger posts and driving them from the basket.  Indeed, most of Oden's turnovers last night occurred away from the basket, as he was pushed 8+ feet from the hoop and moving with less comfort or out on the perimeter, drawing body control fouls while setting screens.

"I tried to make it tough on him and didn't let him get position down in the paint. I tried to keep him off the offensive rebounds for easy put backs, but he still did a great job on the defensive end altering shots," Hayes said afterwards.

Throughout the game, it appeared Oden rushed his shot. Did it look that way to the Rockets?

"Maybe. Maybe. There were times where he probably thought he did," Hayes explained. "I don't know if he was frustrated or not, because when he did get the ball I felt he was always out of position to score. It looks like he's in shape. I'll give him that."

Dwight Jaynes tweeted this morning that he believed the Blazers were not serious about getting Oden the ball.  Dwight argued that Oden's lack of offensive production wasn't simply a matter of not obtaining good post position, that his teammates simply aren't checking for him on offense.

So I decided to chart every offensive possession that Greg Oden participated in last night.  The results confirmed that Hayes did an excellent job of minimizing Oden's offensive impact but confirmed Dwight's assertion as well.  The numbers are pretty astonishing.

In other words, Greg Oden touched the ball on less than 20 percent of the offensive possessions last night and went more than 2.5 minutes between touches on average.  Even worse, after a turnover-plagued first quarter, Oden touched the ball just 5 times on the 36 possessions he played during the final 3 quarters, less than 15 percent.  Sure it was evident while watching the game that Oden was out of the flow on offense.  But that much out of the flow?
Remarkably, of his 10 touches, 4 were initiated by Oden himself thanks to offensive rebounds.  In other words, Oden's first touch on a possession came from a teammate's pass only 6 times during the the entire game.  Remember, Oden played 26 minutes last night.
His longest dry spell occurred during the second quarter, where during more than 7 minutes of game action he touched the ball a single time.  This touch?  Standing roughly 18 feet from the hoop, Oden swung the ball to Steve Blake on the perimeter.
Of Oden's 10 touches, 1 ended with a made field goal, 2 ended with missed field goal attempts, 4 ended with passes (1 of these an assist to Miller for a layup) and 3 ended in turnovers.  That's the definition of a tough night.

Talking with Nate McMillan this afternoon, McMillan praised Oden's positioning and general play against Hayes.  This caught me somewhat off-guard.  In reviewing the tape, it's clear that Oden fought for position all night.  But where was he fighting for position?  On many possessions, Oden was on the weakside, often fighting for rebounding position or a spot on the low block before a shot had even gone up.

In the charts below, I have noted Oden's position when each possession ended.  Nearly half of the possessions end with Oden on the weakside, a non-factor on offense but regularly drawing a lot of attention on the boards.  Many possessions also end with Oden in the high post, either because he was setting a screen for a ball handler or because a shot went up before Oden expected.

As I wrote last night, Blazers coaches and management are surely tickled to death by Oden's 12 rebounds and 5 blocks despite his lack of offense and turnover troubles.  Certainly, working Oden into the flow on offense will be a gradual process.  But let's put it this way: if last night is any indication, the process is beginning from rock bottom.

Oden set more than 10 screens during last night's contest and didn't receive a single successful pass for his efforts (one errant pass led to a loose ball foul in the second half, otherwise nothing).  Setting screens is tough work.  Grabbing rebounds is tough work.  Running the floor is tough work.  It takes a rare mentality to do all of that and rarely touch the ball.  It takes an even rarer mentality to possess offensive skills and still possess that selfless mentality.

Last night, Oden proved he was willing and able (even happy) to do the dirty work in lieu of participating in the team's offense.  Can that last forever?

Here are the full results. Click here to see a full size chart. 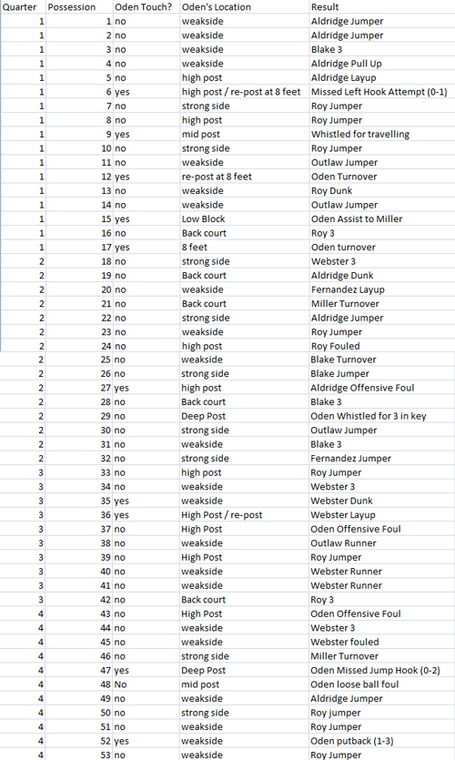