Aldridge Signing Is a Turning Point for Player, Coach and GM

Share All sharing options for: Aldridge Signing Is a Turning Point for Player, Coach and GM 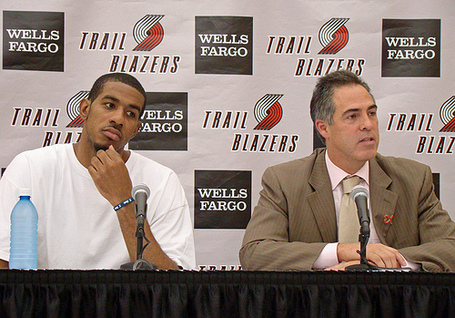 In and Out of the Limelight

LaMarcus Aldridge didn't dress up for his big day, no monogrammed shirts or tailored suits like Brandon Roy.  Just a white tee and some sweats.  Aldridge didn't even appear all that excited to be a part of the official announcement, looking down regularly during the short press conference and fidgeting with his hands whenever Kevin Pritchard complimented him.  He did manage to crack a joke or two that brought polite laughter.  Otherwise the vibe was more "get me out of here!" than "I've made it to the top of the world!"

His shy attitude was no surprise, his humble responses in line with everything he's said during his last three years as a Blazer.  He called the promise of his new-found wealth "kinda crazy" and "a blessing," and admitted that inking the extension was "a burden off my shoulders."

I got the sense over the last few weeks that Aldridge's "burden" was the constant media scrutiny about his ongoing negotiations rather than any stress over the actual negotiations.  The perfect contrast to teammate Brandon Roy, who stoked media attention by going on Seattle radio to express his frustrations, Aldridge tired quickly of giving the media daily progress reports and left the back-and-forth and fine-print details to his agents.

With extension signed and press conference completed, Aldridge can retreat to his comfort zone: playing second fiddle.  Indeed, Aldridge will earn nearly max compensation without needing to deal with the single-minded scrutiny that usually accompanies that kind of paycheck.  Sure, detractors will continue to get on him for his "softness" and modest rebounding numbers, but as long as Brandon Roy is around and healthy, Roy will garner more accolades and bear the bulk of the responsibility when things don't go as planned.  It seems like a trade-off -- less fame but less criticism -- that Aldridge is happy to make.

Kevin Pritchard doesn't quite see it like that.  He told me after Friday's press conference, "I think [Brandon and LaMarcus are] lucky to have each other. When you have a good team, you have 3 or 4 of those guys that you can depend on. And ultimately that's what we want to get to. 3, 4, 5 guys with a collective responsibility so it's not [any individual's] responsibility to win a game."  A nice ideal, sure, and a good internal culture to cultivate.  But look no further than the last two NBA seasons -- Kobe failed! LeBron failed! -- to realize that fans and media at large aren't believers in collective responsibility.  Stars win rings or they fail.  That's the name of the game in the NBA.  Roy is a star; Aldridge, not quite.

Star or not, LaMarcus Aldridge is now able to do what he hasn't yet done as a Blazer: get fully comfortable.  His path is set, his role is clear, his immediate future is all laid out, his every financial need taken care of.
All that's left now is the basketball. And when it comes to the basketball there's still plenty of work to be done.

Pritchard started Friday's press conference by stating that Aldridge has "exceeded far and above what we expected from him 3 years ago" and that he is "as good as it comes on the court." Pritchard hailed his power forward as a "franchise cornerstone and an amazing person."  McMillan echoed those sentiments calling LaMarcus a "good player with great potential."

Push a little harder, though, and it's clear that Aldridge's contract extension is as much about what he can and should do over the next six years than it was about what he's accomplished in his first three.  "I think every year expectations and pressure increase whether you're winning or losing," Nate McMillan told me on Friday. So are expectations magnified on Aldridge specifically because of his new extension? "The contract? Of course, that's part of it, " McMillan admitted. "LaMarcus knows he's a good player, that he has to continue to work and get better, there's still room for improvement with LaMarcus and we'll do that. He needs to improve on both ends of the floor."

Nate's list of potential improvements for LaMarcus was surprisingly long, and candid.  "Offensively, [LaMarcus can improve] making passes, attacking the offensive glass, handling the ball. Defensively, [he can improve] rebounding the ball, defending [his man].  On both sides, there's room for him to grow."

Asked for his own list of improvements, General Manager Kevin Pritchard directed the question to McMillan, as he often does.  Asked if he agreed with Nate's list and with the general premise that there was work to be done in all facets of the game, Pritchard said he did.

Although everyone seems to agree Aldridge can and should take steps forward this year and in coming years, there was also a consensus about the importance -- both immediate and long-term -- of this contract extension for the organization. "We've secured him for a long time," Nate said, almost exhaling. "To be able to get that behind [us] is good for everybody. To be able to do it before the season, the timing is great for us.  I know that [LaMarcus] is happy it's behind him and [Thursday] night after signing he looked like the old LaMarcus. I'm happy it's been done and he can move on and we as an organization can move on."

I asked Pritchard if he addressed this signing with Aldridge the same way he had earlier this summer with Brandon Roy, issuing a challenge of sorts and getting the player to think about his destiny and ultimate goals. Pritchard smiled and said simply, "I haven't had a chance to sit down with him. This happened very quick. It kind of ebbs and flows in the negotiations and all of a sudden you're right there and you get it done."

But is that same talk coming?  Does Pritchard approach this not-quite-max signing in the same manner as he did the Roy's max deal? "There's no doubt I will have a talk with LaMarcus about expectations. But it's a balancing because I want him to go play free and true without him being inhibited by his contract. I know he's going to play hard every night. He plays his tail off, he very rarely misses games, he plays the right way. So it's more about him increasing what he does. Being more dominant, being more vocal, taking over as a leader. He has a voice with this team. Without a doubt, everyone on the team respects him."

LaMarcus Aldridge can get back to basketball and Nate McMillan can breathe a sigh of relief and turn his focus back to juggling his lineups.  But what's next for Kevin Pritchard, now that his off-season is effectively over thanks to the Aldridge extension and the Patty Mills signing? Shopping Travis Outlaw Pritchard disputed the notion that his job was done for awhile and said he would focus his attention on bringing together the group he has helped assemble.  "I'm pretty active in talking with the guys, seeing where they are, and seeing how I can help on a daily basis. I would say some of the heavy lifting is done, but more importantly now I have to help the team in terms of developing a chemistry."

Pritchard also dismissed concerns raised in recent weeks that chemistry might be an on-going problem, pointing to the team's 20 point blowout of the Phoenix Suns in their final preseason game as evidence that progress was being made. "I saw the game [Thursday] night, you could start to see things turn. It was unbelievable," Pritchard told me. "The question is, 'Can we maintain that?'

Does that make Andre Miller an iceberg?  Jerryd Bayless a potential tidal wave? Questions for another day, I suppose.  It was clear from both Pritchard's forcefulness and his uncharacteristically jovial demeanor on Friday that he's happy and relieved that the truly rough seas -- those two intense, big-dollar extension negotiations -- are behind him.