Update 2: Sean Meagher passes along a link to the audio from Jason Quick's spot on Wheels At Work.

The Blazers' upside down preseason does another somersault.

Jason Quick comes through with the full story after this morning's interesting affair described earlier by Brian T. Smith.

Jason Quick told Kenny Vance on 95.5FM that guard Patrick Mills has earned the team's 15th and final roster spot and that wing Ime Udoka and center Jarron Collins have been notified that they will be waived tomorrow. 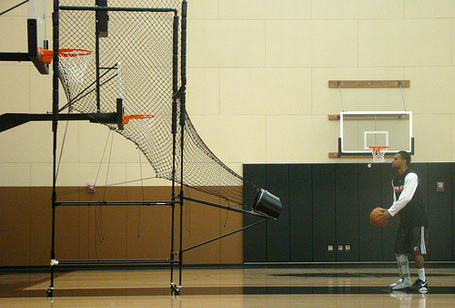 Mills, an Australian-born Point Guard who went to college at St. Mary's in Northern California, fractured the fifth metatarsal in his right foot during the first Las Vegas Summer League practice and has been rehabbing ever since. Mills is expected to continue his rehabilitation work and miss an extended portion of this season.

Mills was signed to a non-guaranteed contract on October 16 and becomes the Blazers' 4th point guard.

Quick described the move as a big surprise to many within the organization. If you remember, on draft night Kevin Pritchard quite clearly stated that Mills "has a passport," implying that the team, without a true need at point guard, hoped Mills would play overseas this year. Throughout this summer, Mills made it clear he was interested only in playing in the NBA.

During his radio spot, Quick stated that Coach Nate McMillan was "not happy" with the decision to add a young point guard over a veteran presence. Quick went on to imply that the decision might have been made above Kevin Pritchard's head as well.

Assuming Mills is being paid the minimum rookie scale salary for 2nd round picks, the same amount paid to Jeff Pendergraph and Dante Cunningham, he will make $457,588 for the 2009-2010 season. Signing either Udoka or Collins at the veteran's minimum would have cost the team $825,497 for the 2009-2010 season. By opting for Mills, the Blazers retain his rights and save themselves $367,609 for their warm body 15th man. Had the team signed either Udoka or Collins, they would have had to waive Patty Mills, sacrificing his rights entirely.

The Blazers can potentially use this $1.4 million of open cap space to facilitate a lopsided trade. Although roughly $300,000 doesn't sound like a ton of money when it comes to professional salaries, every dollar counts when it comes to maximizing your trading flexibility.

Needless to say, this is a surprising development. As recently as yesterday -- even after Mills was signed -- everyone I had spoken with on or off the record saw this as a two person race, with Udoka the leading candidate thanks to his relationship with Coach Nate McMillan. Mills had also been noticeably absent from the team's Practice Facility recently.

The only tip that I can remember foreshadowing this move -- and it is probably entirely unrelated -- was a brief chat I had with Kevin Pritchard on Media Day. As I wrote at the time...

Filling the 15th roster spot, Pritchard told the crowd that he would look for someone who is "high energy" but also someone "that can play." Later he pointed towards defense as an area that needed improvement and I asked him whether filling the last spot with a big man could help reach that goal. "They say you can never have too many big men in this league," Pritchard told me, "But I'm also a former point guard. And you can never have too many point guards." Wrap your head around that quote.