The overriding vibe at the Practice Facility today was about settling: settling down into a long grind after an initial media blitz, and settling into heated positional battles that will likely continue into next week.

For the first time this week, Coach Nate McMillan alternated the scrimmage lineups a little bit (Rudy played with the starters, for example) but was careful to note after the scrimmage that we shouldn't read into that.  My guess is that incidental mixing and matching will take place at least until Tuesday, the date of the first preseason game.  At that point, any lineup jiggering during practices might take on additional meaning.

I hate to continue to beat this drum but the highlight of today's practice was the play of Greg Oden.  I can't put it any better than I put it earlier this week: he's back to looking like a basketball player.  For the first time I saw him step out and take the 6-8 foot face up jumper that we've been hearing so much about.  Knocked it down cleanly twice.  He also rose up to throw home a thundering alleyoop dunk. Vicious finish aside, it was nice to see him do it without a second thought.  Leaping in the air on the run like that can leave your body (legs) exposed, reason enough to simply gather the pass, come down, and then power up.  Not today.

On a few possessions, he looked like the best player on the court.

Here's a play that really stuck out today from Andre Miller.  Miller takes his man off the dribble to the right, encountering a double team on his way to the hoop.  He whips a quick, short pass to his unguarded big who takes a single dribble and picks his dribble up, freezing things momentarily as the defense collapses on him.  Recognizing what just happened, already in motion, Miller frees himself from his own man by rubbing off the big and requesting the ball back.  The big obliges and Miller finds himself with the ball just outside the paint with 3 defensive bodies near him.  In the tangle, he's tripped slightly (may or may not have been a foul called in a game) and starts to fall to the floor.  A travelling call or turnover is sure to result if Miller doesn't get the call (which he didn't in this scrimmage).  As Miller falls to the ground in the middle of the key he glances to his left and throws a one handed pass to the corner of the court, where a three point shooter would be spotting up.  Only there's no three point shooter there when he throws the pass.  There is, however, Brandon Roy sensing what Miller is about to do and hard-cutting to the corner, meeting the ball in rhythm before it has a chance to sail out of bounds.  Roy takes the pass in stride and lets off a completely uncontested 3 pointer, which unfortunately rims out.  The ball goes down the other way.

The end result was zero points.  so why bring this play up?  For a few reasons.

First it represents such a distinct departure from last year's point guard play.  From the start it was something of a busted play yet the observer felt total comfort with the ball in Andre's hands -- in the paint, in traffic -- all the way up to the point where he was splayed out practically parallel to the ground, throwing a risky crosscourt pass. At that point, the fear kicked in a little bit but only because the observer didn't have the same intuition and vision that Miller himself had.  No way in hell did I see Brandon Roy.  He did. I'd venture to say no point guard on last year's roster could have or would have wanted to make that play.  It was daring and slightly risky.

Second it was the first real look at the interplay between Miller and Roy.  Roy's called the "natural," right?  I think many around the league and his college coach would call Andre Miller a "natural" point guard too.  His relative silence off the court has been in large part driven by a confidence in what he can do on the court.  He describes basketball as a simple game because he understands it innately.  There might be questions about his age or attitude but there aren't really any questions about his basketball intelligence.

As I wrote yesterday, Brandon and Steve have a nice chemistry together.  But Steve's lack of assertiveness is something of a limiting factor in terms of the pair's production ceiling.  Steve knocks down his shots, limits turnovers, spaces the court and brings it every night.  But maybe he doesn't get Brandon easier looks. Maybe he doesn't intuitively get what's happening 360 degrees around him.  Miller can and does.

This post doesn't intend to render judgment on the basis of one play.  But this play does serve as a reminder of what, exactly, the Blazers got when they signed Andre Miller.  A new, potent look from the point guard position.

Mills was back in the gym today still wearing his protective boot.  Joe Freeman tweets that Mills will likely be wearing the boot for another 2 weeks or so.

Here's another flick of Mills getting some shots up with the help of Blazers Scout Mike Born.  Kevin Pritchard looks on. 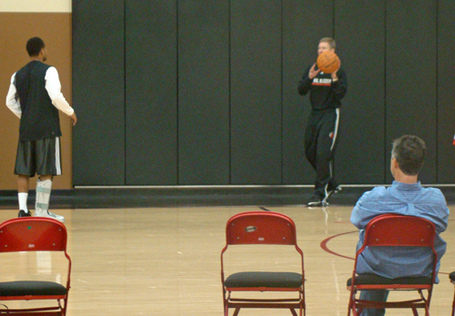 I talked with Nate briefly to see if he has kept up with last year's Blazers that are no longer with the team: Channing Frye, Shavlik Randolph and Michael Ruffin.  Nate said he tries to but that he generally waits until the season has started to really make those connections.  I asked him if he had heard the reports that Channing Frye might start down in Phoenix and he seemed more than a little surprised.  "I knew he'd get some time," he concluded, before kind of trailing off. I suppose Nate's got enough new guys of his own to worry about.

Last year's camp saw Nate praise LaMarcus's development very openly.  Hints of the same today regarding Greg Oden.  Nate seemed very pleased with Greg's play and attitude and was careful to state that he wants to continue to see that, as if he's not quite convinced that the New Greg is here to stay.  After starting him and then benching him last year,  his apparent trepidation is understandable.  But so is Nate's excitement.

We know that the 3-point ball is something that he can do. And that is what we want him to do, is be that sniper on the perimeter that keeps that defense honest and spreads the floor. You know, we have guys that can score, we feel, if we give them room to play with the ball. And you gotta guard Martell; you can't play him soft ... you can't sleep on him, or he'll burn you from the 3. And the fact that he can put the ball on the floor, that's something that we'll want to see during the course of the season.