Turn Back The Clock Night

Share All sharing options for: Turn Back The Clock Night

Tonight is the Portland Trail Blazers' long-anticipated return to the Memorial Coliseum.  They'll host the Phoenix Suns -- led by dominating center Channing Frye -- in the predecessor to the Rose Garden, a building that's both near and dear to many Blazermaniacs and on its last legs.

Yesterday I got an email about all the logistics which included this priceless line...

This is where things get a bit different. There are no showers in the Blazers' locker room...

Oh.  Uh oh.  I guess we are in for a little something different.

In any case, there's some great stuff out there celebrating the building and the team's history.  I urge you to get in touch with your historical site today and give it all a thorough look. You just might learn something.  Or cry.  Or both.

Here's a preview of what to expect tonight from Blazers.com.

In what is being dubbed a "turn-back-the-clock" game, each quarter will symbolize one of the four decades of franchise history. The team will pay tribute to each decade of Trail Blazers history by bringing back former players and staff to help kick off the 40th anniversary season. The Trail Blazers will also wear their new "Rip City" alternate jerseys.

A great picture of the court from Blazers Employee Kris K. 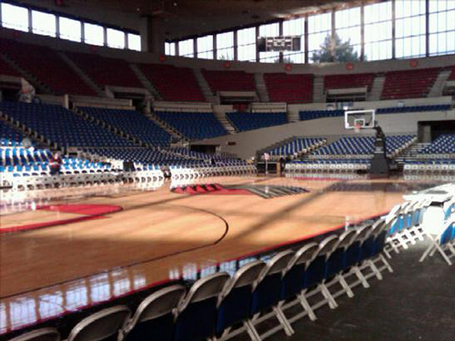 Casey Holdahl has a bunch more flicks over on his blog, including a crazy panoramic view.

Sean Meagher has another great shot over on Oregonlive.

A fantastic idea executed very well: Jason Quick leads a panel of Blazers intelligentsia through the first discussion of many to come, concerning the "Top 40 Blazers in Franchise History."

That's exactly how history should be remembered.  Straight basketball talk.  No price tags attached (unless you want to count the scary large logo in the background, to which I'll give a pass).

Kudos to both Jason Quick and The Oregonian for putting this together and doing it the right way.

Dwight Jaynes offers a much-needed tribute to some of the sportswriters that have covered the Blazers over the years.

Some great, great sports writers who wrote so many marvelous pieces there. Blazer beat writers like John Dhulst, Wayne Thompson, Bob Robinson and Ken Wheeler told the Blazer story with great skill and accuracy. Never fawning but always fair, these men did their jobs in an era before all the new media brought attention to the writers themselves. Most of those guys, in fact, would have run from the spotlight, anyway. They just weren't brought up in the business to think they deserved it.

If you couldn't tell from the video above, Wayne Thompson still has his fastball: on a panel full of Blazers experts, everyone defers to Wayne time and again.  Many times over the last two years, I've thought that someone should just tape everything Wayne says during the course of a Blazers game and post-game media session, type it all up and then post it on a blog. (Oops. Did I just give away my secret?)

I can't speak for the rest of the writers Dwight mentioned, but I can say that nobody deserves official recognition from the team more than Wayne Thompson.  Need more convincing?  Go back and read Breaks of the Game again.  Who consistently had the best stories that Halberstam retold? Wayne Thompson.

It's been a long time since he's done a game and a few weeks ago he expressed a little concern to me that he was worried about how well he would do.

As we all know, it doesn't matter. Just get on there and do it, Schonz. It's just the act of doing it that matters. One more chance for us all to hear that great voice again and with that, relive some warm and wonderful memories. It's going to sound great, I'm sure.

Schonely has been putting in a lot of face time at the Practice Facility these past few weeks.  He's always around.  But even more so recently, it seems. There he was yesterday, chatting up Nate McMillan long after practice was over.  Back on the grind, I assume, preparing for his big night.

Only one man in the state -- John Canzano -- could get this sentence into a newspaper.

Stand, and holler if you're inside Memorial Coliseum.

I don't personally know anyone with more old-school Blazers gear than Sheed over at Bustabucket.com.  Like this shirt for example. Or this cereal box.

Brian T. Smith has a look at Bill Schonely.

"They gave me (a ring), and I'm very, very proud of that," Schonely said Tuesday at the team's practice facility. "And I would like to be around when they do it again. That's my goal. And I think it might happen sooner than a lot of people think."

Brian T. Smith also has some quotes from Terry Porter.

As far as the arena itself, God, I have so many great memories. I think one that jumps out in my mind, we played what a lot of people called the 'perfect quarter' in this building against San Antonio. And I don't think, we must've missed two or three shots. We did everything right that quarter, and ended up scoring 40-something points. The playoff games in this arena. Game 7 against San Antonio, (Kevin) Duck(worth) running out of the locker room after he broke his hand and didn't play in any of the game but Game 7. That same series, I think Jerome jumped out and saved a ball, and we were down by three or four points or something. I got it, and threw it to Clyde (Drexler). Clyde raced down the court and scored and got an and-1, and we came back and ended up winning that game, and winning that series.

I wish I had a bunch of Memorial Coliseum memories but I was 11 when the Rose Garden opened in 1995.  Surely you guys can help me out with your memories in the comments.

But I do have one great Memorial Coliseum memory and it happened last April.  Driving back down to the Rose Quarter hours after a Blazers game, in the middle of the night, to find hundreds of fans camped out waiting for single game playoff tickets. 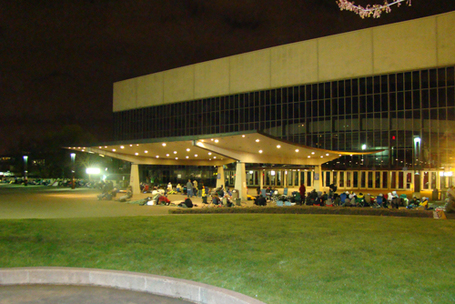 Hard to believe that was almost six months ago already. Good times.

Can't wait to do that again.

PS Word is that wireless access might be an issue as well so if I'm not live-blogging in the open thread tonight I apologize in advance.