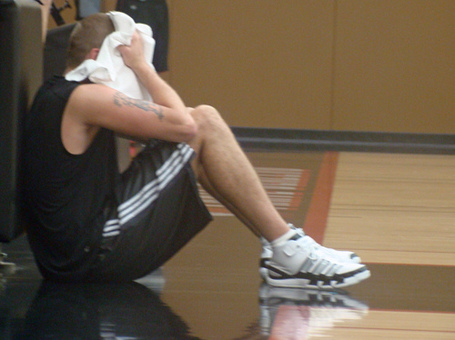 The team opened practice up for an entertaining full court scrimmage today.  More on that below.  But first a few notes.

Time for some pictures: way more gameplay today and way less shoes.  You can watch the slideshow below and here's a link to view the full-size slideshow with details. Click through the jump for some discussion of my favorite shots. 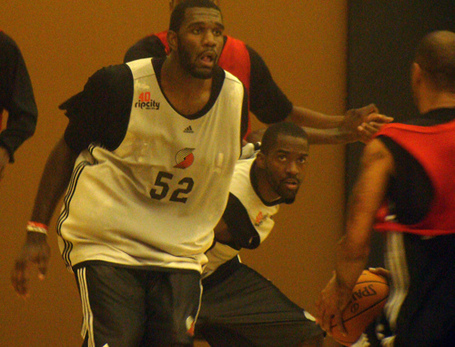 Talk about two hungry defenders.  Love the focus on Martell's face.  Love the concentration from Greg.  The scrimmage that we were allowed to watch was very physical and competitive.  Referees were brought in to officiate and there was definitely some jawing and a lot of bumping.  While subbed out, Greg was cheering his teammates on from the sideline, clapping louder than anyone in the gym.  Is this reality? 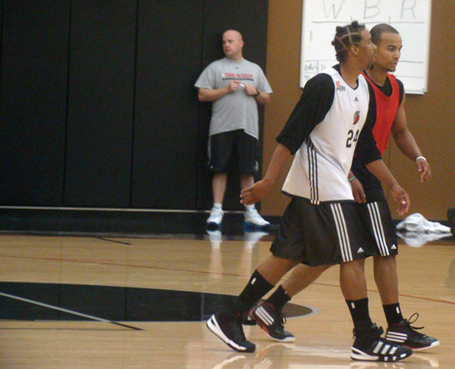 Speaking of defense, here's Jerryd Bayless literally shadowing Andre Miller.  It was a kick to watch these two go at each other.  Miller regularly turned his back to Bayless and backed him down, punishing him time and again.  Tonight on Twitter, Bayless wrote that he was feeling sore.  No wonder.  To his credit, Bayless didn't give an inch.  Two tough guys with big pride going at each other's necks.  Very, very entertaining to watch. 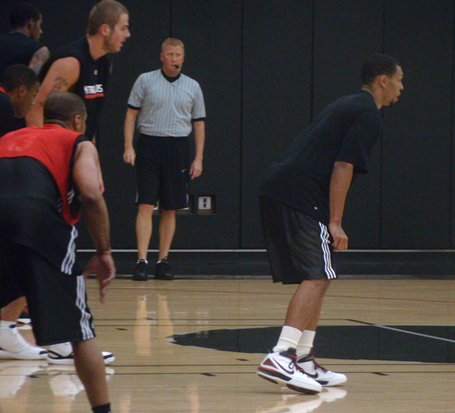 In a previous practice report I quoted Brandon talking about the team's zone-ish defensive look that is meant to confuse the opposing offense.  Here's a quick look at it.  Brandon's man is Ime Udoka who is hiding in the corner.  Brandon is cheating in quite noticeably, cutting down the point guard's driving angles and encouraging the ball to that corner.  That's where the closeout drills that you read so much about earlier this week come into play.  Should the ball swing to Udoka, the team has drilled on how to close out on him to seriously contest a shot should it go up (without fouling) without over-committing and allowing penetration from the wing after a pump fake.  As Brandon rotates out on Udoka, the weakside defenders rotates over as well, supporting Brandon's on-ball defense and closing Udoka's passing and driving angles.  Once rotated, they over-cheat in the same manner that Brandon does above.  Not exactly rocket science but now you've got a visual to go with what you read earlier. 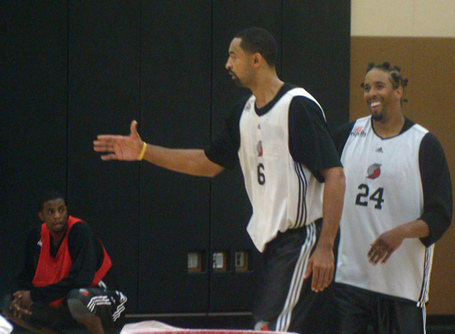 I'm going out of my way to put this picture out there to give everyone a sense for how Andre Miller's personality plays with his teammates.  Here, Miller and Juwan Howard celebrate a scrimmage win.  You can see the desire to win and also the thrill of victory. Also, a goofy haircut.  Importantly: no threats to track anyone down for putting anything crazy in a newspaper. 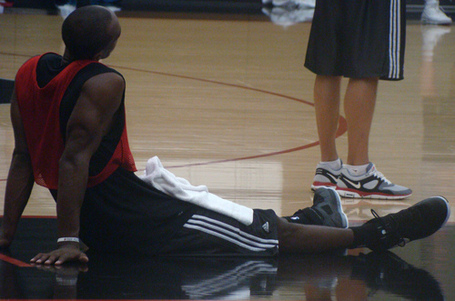 Dante Cunningham looked gassed after practice this morning and it's no big mystery why.  He was matched up for extended periods against LaMarcus Aldridge, who appeared to be sending a message to everyone in the gym that a rookie wasn't going to be able to stop him.  A good 3 or 4 times LaMarcus was on the block, taking the ball right at Dante's chest, alternating between drawing contact and getting whistles, and finishing in a variety of ways with relative ease.  The pictures that have circulated don't lie: LaMarcus's upper body is newly-yoked and it makes a difference on the court. Still the same fluidity of motion but more oomph as he moves through the key and towards the rim.

Add it all up: Aldridge was the most impressive player on the court today.

Watching this battle play out, I thought back to Summer League when Blazers Scout Chad Buchanan praised Dante's "core strength."  No doubt about it: despite his slender frame, Dante is a strong guy.  He looked especially strong against his fellow Summer Leaguers. But against LaMarcus?  Forget about it. 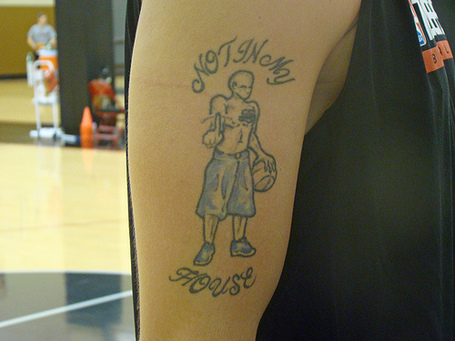 Last but not least I finally got a clean shot of Joel Przybilla's infamous "And One" tattoo which reads "Not In My House."  Is it just me or is the player wearing jorts?