Good news, I made it back from practice and didn't get sued.  Kidding.  Practice was wild today, so many stories going on simultaneously it was one of those days that your admiration for the PR staff goes through the roof: they were overseeing the GM handling the Darius Miles crisis, the coach taking the standard beat questions (playing time, roster moves, etc.), the star player answering questions about his health status, and coordinating the 9,000th foreign interview with Nic Batum, all within the same 20ish minutes.  Ridiculous.

Before we get to the Darius Debacle (The NBA Players Association is going to file a grievance on Darius's behalf. Crazy.)...

Correct information regarding salaries is important. On Bill Simmons' podcast, Marc Stein stated that he believed Raef Lafrentz's contract's insurance money could only be cashed in by the team on which he suffered his injury (the Blazers) and could not be "traded" to another team, similar to how career-ending injury insurance compensation cannot be "traded" (Eric Snow's deal, for example). If this were true, it would significantly reduce the value of Raef's Expiring Contract on the open market because half the fun of RLEC is the bathtub full of cash you get to roll around in once the insurance company pays you.

To clarify this situation, I checked with the Columbian's Brian Hendrickson who has reported previously on the insurance aspect of RLEC.  Brian emailed to say,

KP told me specifically that any team that trades for Raef gets to carry on the benefits of the insurance payments. Which makes sense if you think about it. The insurance is designed to protect the team that is paying the salary. It would be a little weird if one team was paying it and another was getting 80 percent of it returned.

To clarify: once Raef does not play in 41 games due to injury, the insurance payments will kick in.  The payment is divvied up on a per-game basis through the rest of the season.  You can think of the insurance payment as a pizza with 41 slices, each slice is given to the team that holds his contract during each game.  So, hypothetically, if the Blazers hold Raef until game #50 this season and then trade him, and that team holds him for the duration of his contract (the final 32 games of the season), that team will be able to collect 32 of the "slices"  of the insurance money.  The Blazers would receive the rest.  RLEC therefore remains one of the most valuable trade chips on the market.

It was impossible not to notice immediately upon entering the Practice Facility that the Blazers were sporting headbands.  It looked downright weird.  As explained previously, LaMarcus suffered a hole in his ear drum during the Detroit game.  He will most likely be wearing a headband as protection during tomorrow night's game.  As a show of support, his teammates wore headbands during practice today, each with his own personal flair.  Nate said, "we don't wear headbands" jokingly (that's been his policy for a long time) and said that the team would not likely wear them in tomorrow's game.

Here are a few pictures.  I think Sergio looks awesome in a headband... 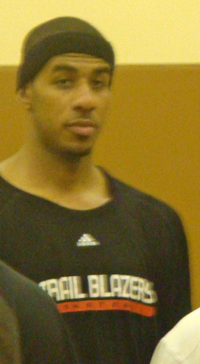 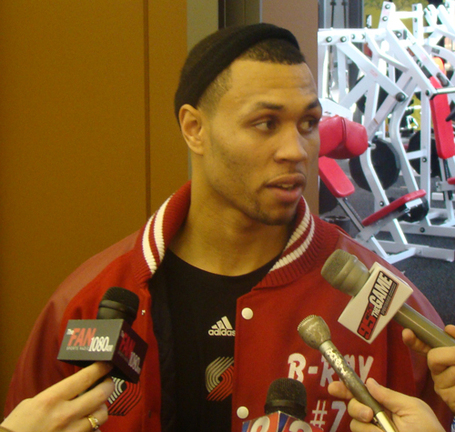 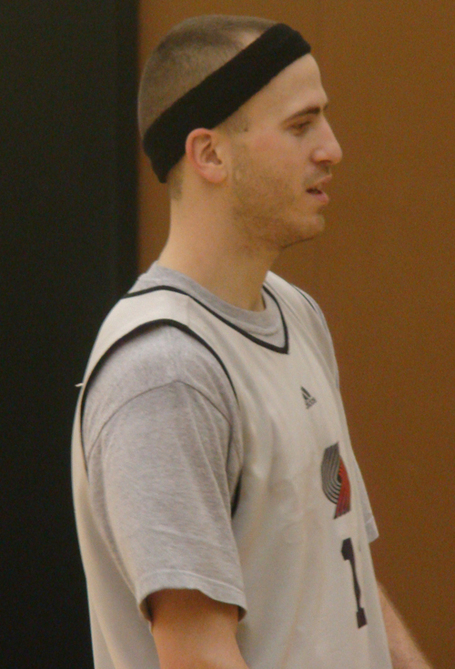 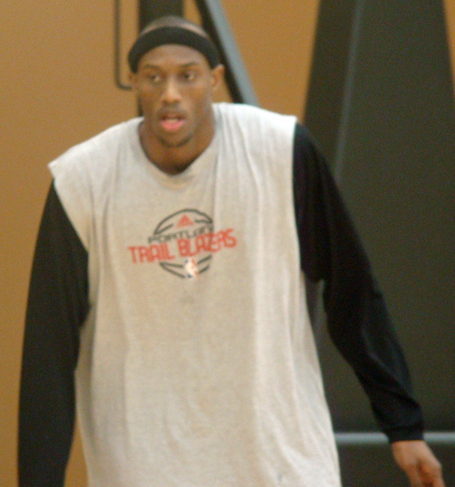 Nate called it a game time decision tomorrow whether Brandon will play against Golden State. We were told that Brandon was playing during practice prior to the media open session.  He was said to be under doctors' supervision during the practice.  He didn't seem to be moving completely normally but what can you really expect?  I can tell you that he was sporting some shoes that I hadn't seen before... 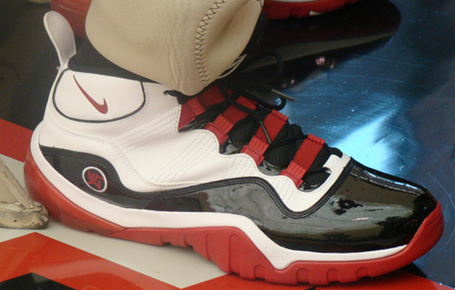 After taking questions for roughly 8 minutes regarding the Darius Miles letter, Kevin Pritchard joked, "OK, now I'll go get a root canal."  That's becoming his go-to joke in sticky situations and it was clear he was not exactly enjoying himself answering question after question about the letter.

As you might have noticed, the letter included a statement from Blazers President Larry Miller, which I found curious because most press releases about basketball matters come with quotes from Kevin Pritchard.  I think there is probably some symbolic value to that: as President, Miller oversees both basketball and business operations of the franchise and Pritchard mentioned that the team and organization shared a "united" front on this matter.

Given that the statement came from Miller, Pritchard also was able to avoid some questions by stating, "You'll have to ask Larry Miller."  I did not see Miller at the Practice Facility so my guess is you should probably expect any statement from him to come via Jason Quick or John Canzano.

Here's the video (sorry for the bad audio and shaky visuals... it is what it is)...  Scroll down for a transcription.

Here's the transcription.  Questions are bolded and paraphrased... KP's statements are in block quotes.

General thoughts on the letter.

"Larry Miller would be happy to talk about our response with other teams and I'm happy to talk about the team and where we are at. I woke up this morning and I had two thoughts. I'm not going to let any of this affect the team.  The one thing we know is change happens in this business, things can happen, and we've gone through some tough times. We're not going to let this affect how we play on the court. There are off the court issues and how we play on the court and I'm going to make sure this doesn't affect us on the court."

"You guys have written about it, talked about the implications of the luxury tax, we looked at a lot of different scenarios, planned for a lot of different things, and we will make this team a better team, no matter what. I feel like I owe it personally to the fans to wake up every morning and protect this team and to make it the best possible team. I woke up again and I thought I want to make sure that kid and our fans at the game have those great memories of good teams and good players and we continue to make this team the best organization we possibly can.

Did you endorse the letter?

Did you plan for this?

We talk about all kinds of scenarios, all kinds of possibilities, again I don't want to get into the specifics, Larry can address some of those, we are trying to turn a negative into a positive and I'm not going to let this affect our team.

Did you write or agree with the letter yourself?

Is that an important question? We are united. We have to be united. We talk about every single issue, try to flush out the best possibility and this is the course we chose. We.

I get the sense you are frustrated.

What feedback are you getting?

There's always going to be feedback. Those specifics Larry can address.

How would you respond if you received a letter like that?

I can't give you that hypothetical, I just can't do it.

I don't know that. I've been a GM for a year and a half. The league sends out emails all the time.  It's challenging, it's a challenging situation, my job as a General Manager in charge of our basketball team is to make sure this doesn't affect us negatively.

Are you worried the letter will backfire on you?

It's a big impact to us financially, there's no question about it. Quite frankly in the National Basketball Association, we shouldn't be about an assocation. It's going to be tough. Teams are competitive. Will at all costs it seems like. But I don't want to get into that. The big thing for us is if it happens we will do everything we can to make sure it doesn't affect that team.

Are you surprised he is playing given the medical reports you saw last year?

We listened to everybody. It was never an easy situation. Very, very tough. This isn't about hurting Darius. This has never been about hurting Darius. That's where everybody has got it wrong, in terms of the national [perception]. We don't want to hurt a player. That's not our intention. When we hear it's career ending from multiple doctors, it puts us in a position that we have a no win. There's no win.

Are you a party to conversations that have gone on around the league?

Have you personally heard from other General Managers?

Where does it go from here?

It's a challenging situation for all of us. Other teams. The league has been put in a tough situation and so have we.

Who made the decision to send out the letter?

From the management team to Larry to Mr. Allen to all of us. Our philosophy is we talk it through, look at all of our scenarios and try to make the best course possible.

Was there something that spurred the timing of it?

Yeah, we had talked about different times but that's something you need to ask Larry.