He didn't hit the game winner.  He was watching and cheering from the bench as Travis Outlaw put the Blazers over the top against the Pistons.  In fact, he wasn't even in the game at all down the stretch.  But if you asked his coach, multiple media members, and at least one team official who the difference-maker was in tonight's 84-83 home victory, you'd get the same answer: Jerryd Bayless.

Bayless picked an otherwise listless night in the Rose Garden to have his coming out party; he almost waited too long as the Blazers trailing by double-digits in the first half and by 7 at intermission.  But in a longer-than-usual stretch of play in the third quarter, Bayless unveiled what he calls his "bounce," and what Nate McMillan pointed to as the momentum changer, "he got the crowd into it. He made some plays, he got a steal, he went to the basket and was able to get to the free throw line. It got the crowd fired up. I thought it got the team fired up."

Were you surprised by Bayless's career-high 8 points and the impact he had upon the game? You're not alone; so was he.  Postgame, he admitted that he was taken aback just being on the same court as Allen Iverson, struggling for words to describe facing off against someone he's been watching play professional basketball for more than half of his life. "It's unbelievable... you know... it's just... when you go against these guys you've been watching your whole life, and you're finally on the court, it's kind of tough not to get like... 'damn, that's AI right there.'  'It's Rasheed on the bench over there.' I mean, you can see him right there!"

What was Bayless thinking about while he helped shift the momentum during the third quarter, "I'm stealing the ball from AI, I was trying not to smile," laughing at the memory of himself.  Still in disbelief after talking about it for a few minutes, he shook his head and repeated himself, "I mean, that's AI right there." His wide, giggly smile broadcast his satisfaction.

Bayless looked aggressive, quick and confident going to the hoop, although he again had trouble making shots.  Asked if his game bears any resemblence to Iverson's, he seemed overwhelmed by the comparison.   "Iverson?  I don't know about that.  I wish... Iverson's a Hall of Famer, that'd be something nice to have to my game."  Instead, his sights are set on the man he was guarding, Rodney Stuckey, "he's a young up and coming point guard, I think he's special, I'm hoping to get where he's at right now."

Asked if he felt added pressure to be aggressive on offense and score points in Brandon's absence, Bayless showed a maturity beyond his years, ""No, my focus is defense. That's the main thing I focus on. Coach has always preached to me if I want to play I need to play defense. Tonight, I think the reason I stayed in the game for as long as I did is because I think was doing pretty well on defense." Certainly the credit on the defensive end was not his alone.  Despite some early-game woes, the Blazers guards held Stuckey and Iverson to a combined 27 points on 10 of 31 shooting, and only 2 fourth quarter points.
Of course, in the end, this game belonged to Travis Outlaw, who struck a redemptive blow by knocking down the game-winner with just 8 seconds left amidst weeks, if not months, of trade rumors. No one was more excited by Travis's heroics than Monty Williams, Travis's position coach.   Hours before the game, Travis and Monty, as they always do, shared a lengthy, laugh-happy pregame bull session on the court.  As Blake dribbled out the clock to preserve the victory, Monty could be seen pumping his fist like Tiger Woods multiple times as he left the court; in the locker room, he sported a huge grin on his face as he waited for Travis to finish his postgame workout.  That's right: if you thought hitting the game-winner means you get to skip the late-night lift, you'd be wrong.
Travis finally emerged with a relatively blank face given the circumstances and faced a wall of cameras usually reserved for Brandon Roy.  Travis picked nervously at the hair on his chinny chin chin when asked whether he thought about passing before he raised up for the winning bucket before stating simply "[the shot] was there."   Did he feel the pressure to deliver?  "I don't think much about the consequences of missing a shot." That confidence made all the difference in a big win.
A big, ugly win.
Random Game Notes

Nate on the win: "Scrapping. I thought our guys scrapped.  They seemed like they made everything in the first half. The second half we adjusted our defense as far as trapping the pick and roll and I thought they wore down and we just scrapped. I thought our bench, Bayless, those guys brought some energy and got the crowd into it the second half. It was about scrapping.  They had to make plays and we did defensively and offensively when we had opportunities we made shots. The 3 point ball came back to us."

Quick asks whether Nate thought Travis got the pregame message: "I was thinking about you Quick, right after the game. We talked about needing him down the stretch, the game was on the line and I knew who I wanted to go with but I wanted to involve the coaches.  We all agreed Travis is the best guy to have the ball if Brandon's not on the floor. If you want someone to take the last shot, we went to him both possessions and he delivered.  One time it was against Prince who is one of the better defenders in the league and the second time we felt like we had our matchup and he was able to put the ball in the hole.  Big plays.  You gotta make plays and we did."

Nate on Jerryd: "I thought he got the crowd into it. He made some plays, he got a steal, he went to the basket and was able to get to the free throw line. It got the crowd fired up. I thought it got the team fired up.  It just seemed like we were flat until that point.  But not only Bayless, everybody made some big plays."

Nate on Jerryd's ball pressure: "They were really hurting us on the pick and roll in the first half, our switches our bigs were late at times, the zone, we tried to go to a lot of different defenses in the first half to slow them down.  Second half we decided to trap it and commit when they had non-shooting bigs on the floor, make them pass the ball. I thought they wore themselves down trying to beat that trap. Joel did a nice job, LaMarcus did a nice job of containing those guards and the traps."

Nate on the guys stepping up: "I thought the group tonight did.  LaMarcus, we had a conversation with him about just taking on a role and regardless of whether Brandon is here or not, it's an important role. But without Brandon we really need him.  LaMarcus needs to take that leadership role and set the example for how we want to play so the guys had someone out there to follow.  Tonight he plays 44 minutes, does a nice job of being aggressive defensively mixing it up and trying to fire out guys up in the second half."

Nate on where he has an update on Brandon's health: "I don't. Not right now."

Nate on the importance of the win: "We needed this. First win of 2009. We played some teams and just seemed to be flat the last 2 games.  This game was a lot like Boston.  We had to scrap to win it. The carryover -- we need to see carryover from this game to the next game, that scrappy play for 48 minutes that is what we need to win ballgames."

Nate on inbounding the ball on the right side instead of the left on the final play: "We dribbled on that side, we couldn't flip it. Once we rebounded it on that side, I think Joel took a dribble so you can't switch sides. If we were to rebound it and held the ball we could have advanced it and pick a side."

Nate on the final play: "An iso for Travis. Pretty much the same play we ran just prior."

Nate on whether he was happy to see that Prince wasn't guarding Travis on the final play:  "Oh yeah. Yeah. Yeah.  They basically took Iverson out of the game and tried to get a defensive team in there and we were going to give it to Travis and let him go and he did a nice job."

Nate on the team defense on Stuckey: "He's been hot.  Without Wallace and without Hamilton they've gone to a 3 guard rotation and they just run pick and rolls and they're tough with Prince and Stuckey and Iverson.  Spreading the floor and attacking the paint. We mixed it up, we basically were matched up with the guy that was guarding us because of cross matchups we didn't want guys getting confused in transition." 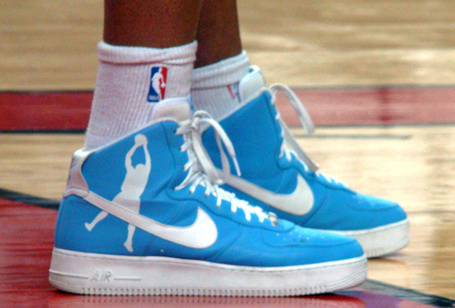 Sheed rocks the best shoes in the NBA. And it's not close. 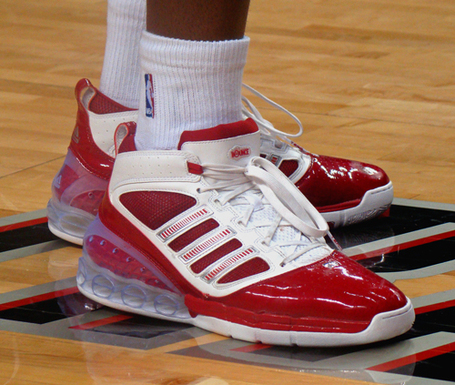 Rodney Stuckey had some sweet kicks.  They remind me of the Iverson Reeboks from wayyyy back in the day. 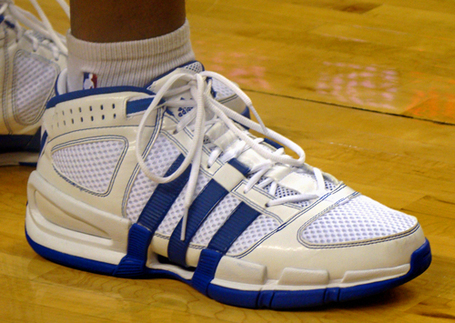 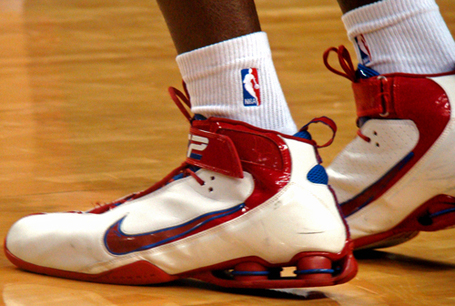 Forgot whose shoes these were.  But not bad.