Hilarious update from Sean: "Outlaw was hanging around the court, talking to Bayless, a little good-natured ribbing, which Bayless, who was in full Predator mode (letting out expletives after any missed shot), wasn't having."

The big news at practice today was Brandon Roy's all star selection (of course) but the real head-turner was Bill Bayno's presence.  My eyes deceived me at first.  Didn't know it was him. 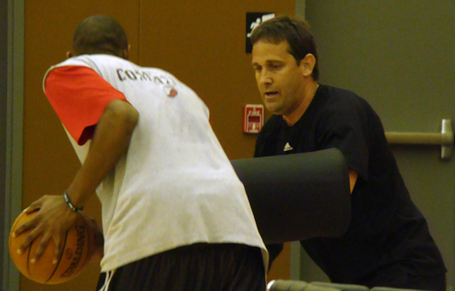 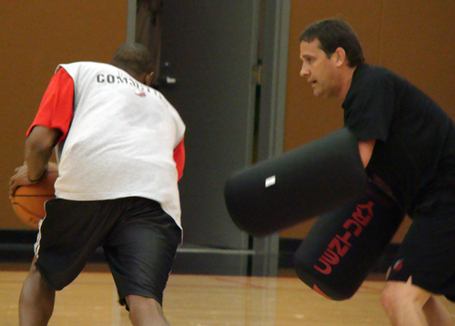 As you can see, Coach Bayno, one of last year's assistant coaches, was back in Tualatin working out Travis Outlaw, little more than two weeks after he resigned from the head coaching position at Loyola Maramount.  No official word has been released about whether he is coming back on the Blazers coaching staff but, at the very least, he was getting in some sweat therapy this afternoon.

My man Jeremy from PDX Magazine was able to corner Sergio for an interview.  You don't see that everyday, as Sergio is notorious for slipping past the media after practice.  Jeremy is working on a piece about the Spanish connection, so keep an eye out for that in the coming weeks and months.

He was giving advice to a young man on his shooting form.  Talk about a great personal shooting coach.  Not many people have Martell beat when it comes to shooting mechanics.  He was also lofting 3/4 court shots then limping after them in his boot. It's hard to watch Martell at this point without feeling really, really sad for him.  I'm not saying I cry at the end of romantic comedies but it's moving to watch someone as physically talented as Martell being weighted down by his boot anchor.

The only mild fireworks today came when Nate openly challenged a reporter's premise that tomorrow's game against Utah is a "big game" because of playoff/seeding implications.  I think Nate finally hit his breaking point for the number of times he can say "every game is a big game" and "we prepare the same for every game." I don't blame him... it took repeating both statements roughly 10,000 times this season before he raised his voice.  Memo to world: Nate is absolutely unyielding about this... There. Are. No. Big. Games.

It's fair to say that Nate is a perfectionist.  His self-presentation, which is always immaculate, is one give-away. His repeated references to goal-setting is another.  And this visceral disgust towards the idea that effort from game to game could possibly be variable over the course of an 82 game season (when it quite obviously is) is yet another example.

If you want to point to one reason why Bayless will ultimately start at the point, it's because he is cut from exactly the same cloth as McMillan.  Nate demands 100% from himself and his players every day.  Same thing for Jerryd. I can pretty easily picture the two of them getting their shirts monogrammed together.  They probably share a barber.  And they're both competitive to the point where if KP beat them at Settlers of Cataan, there would be some silent raging going on and a quick demand for a rematch.

This got me wondering if Nate planned to give himself any time off during All Star weekend. Surprise, surprise... if you guessed he would be supporting his players and family and shuttling from one gym to another, you were right.

Do you have plans for the All Star Break?

I will be going to All Star Weekend.  I don't know if I'll attend all the events but I want to see maybe a couple. I want to go see my son play.  I want to try to get some rest.

You've got 3 guys going and participating in all 3 days of All Star weekend.  Is that a validation of the idea of "Make it Better"?

Would you call it a milestone or is that overstating it?

Well, a milestone?  It's different.  We went from really having no one represent us a few years ago to now we have 3 guys.  It's a good thing. It's a positive to see these guys earn the right to be there.  And have them representing the organization.

You've talked about Greg unwrapping himself.  There will be a lot of lights down in Phoenix.  Are you concerned about that or have you given him any advice about how to handle the All Star weekend glare?

No.  That's going to be an experience that he should enjoy. I can't really tell him because I've never participated in All Star Weekend. [chuckles] So, have some fun.  That's what most of those guys go there for, is to have fun.  You definitely shouldn't be putting pressure on yourself there. It's an opportunity for the fans to see you and have some fun.  That's what it's all about.

It seems like everyone has advice for Rudy in the dunk contest. What's your message to Rudy?

Just come out of it healthy. Don't be doing cartwheels and all of that.