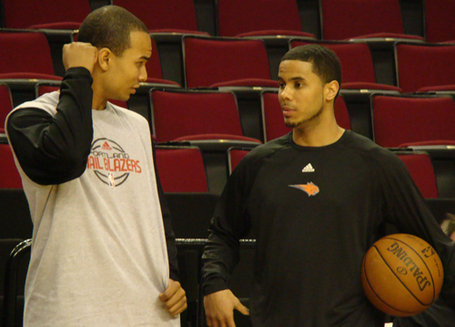 DJ: when we made Blazers Edge melt down? How could I forget.

Mo' credit to the Lakers for tonight's 88-74 home victory against the Bobcats.  Just go right down the list of best case scenarios for the Blazers facing a team on the second half of a back to back and they all happened last night: a double overtime win (super tired and willing to settle for a split of the back-to-back), a late plane arrival, and a key injury (best wishes to Gerald Wallace... sad to not get to see him tonight).  This win was all set up for Portland before tip off.

It took awhile for the Blazers to realize, as Brandon Roy put it, that Charlotte "was tired from the jump."  Cue Bayless entry at the six minute mark with the Blazers trailing11-9.  By the time he checked out 2 minutes into the 2nd quarter, the score was 36 to 19.  By careful calculations on my abacus, I am able to determine that that was a 27 to 8 run in about 8 minutes of gametime.  I am also able to conclude that that was the ball game.

The Blazers never looked back, pounding the ball inside to both Greg (14/14/3/2) and LaMarcus (25/9), who took turns dunking, hook shotting and running the break.  Add to the mix a sick touch pass from Rudy, a flying fast break denying block by Batum and an acrobatic buzzer-beating layup from Rex and it was about as exciting for the home crowd as 88-74 games get.   That didn't stop hundreds from leaving the RG early.  Haven't seen much of that this year.

The Blazers are chilling on a 3 game win streak with no practice tomorrow and 2 days before Utah.  Nobody in the Blazers locker room, nobody, is complaining about that.

Nate's Post Game Comments
Nate on his favorite thing about tonight: "We wanted to just come out and be aggressive defensively. Make it a physical game. We knew they played last night. They played double overtime. This is a team that scraps. We wanted to set the tone defensively, picking up, pressuring, making them work for everything and then offensively go inside. I thought our bigs tonight established inside. They don't double team so they were getting single coverage and both Greg and LaMarcus were able to score."
Nate on increasing the tempo: "We wanted to push. We knew they played last night and probably got in here really late. So we wanted to keep the pressure on them both ways.  Not only defensively but offensively, making them work to get back. We didn't have anything early."
Nate on LaMarcus: "I thought he did a nice job tonight, he faced the basket a little more, I think that's a good move for him.  He was able to knock down his jumpshot and get to the basket.  The fact that they pretty much play straight up, Coach Brown is a coach that holds everyone accountable for their man, so you've got single coverage down there, just you and the defender. He was able to score.'
Nate on Greg: "I think he's starting to get comfortable. It seems like each night out he's getting better. He's not in foul trouble. He's playing smarter, as far as the cheap fouls which have sent him to the bench. He's staying out of foul trouble and staying on the floor. He's doing good things. He makes good decisions with the ball on the block. If they give him single coverage he's been able to score.  He has been the guy that has established that low post presence for us."
Nate on the schedule getting tougher: "One more game before we're on the road.  This is what I was talking about maybe a week ago.  Take advantage of home.  Try to get hot.  We've won our last 3 and now Utah on Saturday, get that before we get back out on the road.  We're winning games, that's the main thing. Taking one game at a time.  We got this tonight, we knew this would be a tough game.  But we got some breaks with their schedule.  Injuries.  We took advantage of it.  Now we have Utah coming in who has had our number this year.  We have them at home and we need to get that before we go out on the road."
Nate on not taking care of the ball: "No question. There was one thing that we didn't do well that we normally do, is take care of the ball, 19 turnovers.  At the half we felt that the turnovers and the second chance points were the two things that kept them in the game. We continued to turn the ball over, we were too careless with the ball. We normally do a better job of taking care of the ball. I thought at times we played the scoreboard and got loose with the ball as opposed to continuing to execute.  I thought we went off on our own and tried to score and we didn't keep the ball movement. I thought we got a little loose as far as our passes and decisions.  You're playing the scoreboard when you're up by 15 or 16 points and that can break your rhythm.  We definitely got to do a better job of that.
Nate on adjusting to the early traps: "We knew they trapped after free throws and dead ball situations. A couple of times our guards dribbled right into the trap.  We just gotta be aware of that, that's part of the scouting report.  You gotta be alert to that."
Nate on whether the team has found a groove: "I hope so. We need to find that. We talked about finding a groove and getting hot is what we've said the last week or so.  We've been able to get our last 3 games and 1 more before we go on the road to end this month. That's the goal for us, to finish out this stretch at home where we are winning ball games. We lost one to Cleveland but for the most part we've done a good job at home."
Nate on Saturday's matchup: "It's a division game, and again, a home game. We've got to protect home court.  Utah has had our number this year so we've got a shot at them at home and we'd like to go out on the road with a W."
More Nate on Greg: "I think he's learning.  He's making adjustments to how the officials are calling.  We're showing that to him on tape.  Just being out there, going through it, he's making adjustments. The more he plays and he picks up what the officials are calling and what he needs to do, he should get better.  Now he's staying out of foul trouble which allows him to be out on the floor and when he's out on the floor he's making some things happen.  You've got to be out there to be productive and he's starting to avoid the cheap fouls and play position defense.  He's rotating a little quicker but he still has a ways to go.  There's a lot of areas he can improve on and he knows it.  He continues to work at it."
Click through for tons of kicks pictures!
-- Ben (benjamin.golliver@gmail.com 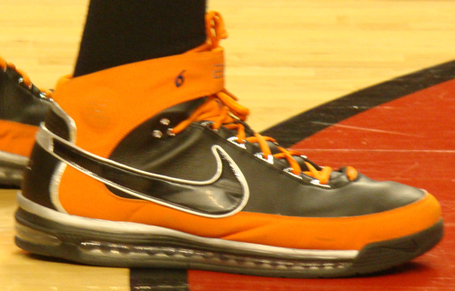 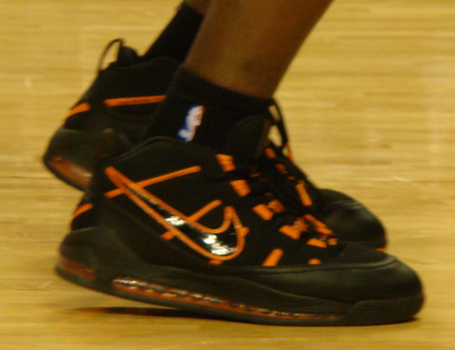 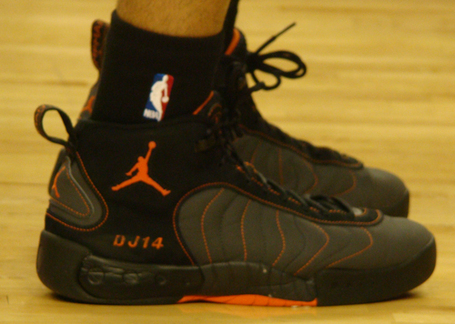 Sadly, this was all we saw from DJ Augustin tonight.  I was impressed. 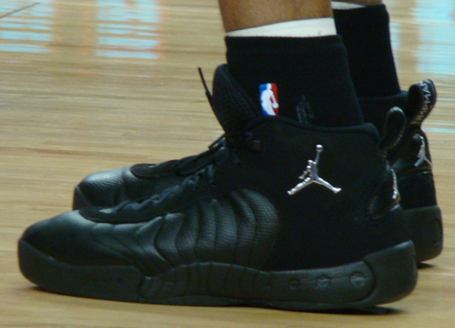 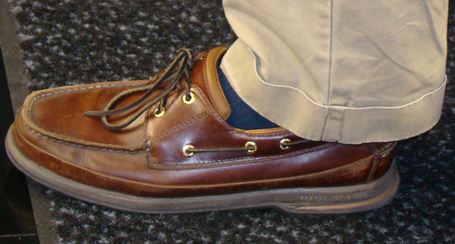 By popular demand: the Air Gollys.