Today we have a special treat on Blazersedge.  We're going to have a new, occasional guest columnist and this is his first submission.  His fine work is familiar to many of you, as you have seen him in such prestigious publications as...

No, I didn't lose a bet.  No, Fatty doesn't have pictures of me and Ben in Brandon Roy's locker with our braces stuck together.  I actually did this on purpose.

Half of you are saying, "YESSSSS!"

For the latter half, let me explain.  I have not always been the biggest fan of Fatty's work, nor his style, nor have I agreed with many of his conclusions.  As a matter of fact, I can only get through about 1/3 of a Fatty post without getting a splitting headache from those margins and that grammar.  However over the last few months I've seen people try to employ a blunt, in-your-face commenting style.  It's come across pretty flat in most cases.  Those who claim Fatty is kind of a troll may be correct, but if that's so he's a troll who has managed to be distinct and have a style.  It's a funky style, but at least it's style.  And pretty honest at that.  If we're going to be blunt or abrasive, we at least need more style when doing it.  So here's Fatty, leading the way.  Some have said this blog has the best writers, the best coverage, the best community that you can find online.  Now we'd like people to say we have the best (or at least most distinctive and interesting) trolls too.

The column will be occasional, I'm thinking.  A dose of Fatty-ness every so often to wake us up.  If you can't stand it, I guarantee these will be the easiest posts ever to quickly identify and skip.

So anyway, without further ado...  You never thought you'd see it and believe me, neither did I...  But here he is...  On the main page of Blazersedge.com...  Ladies and Gentlemen I give you...  Fatty. 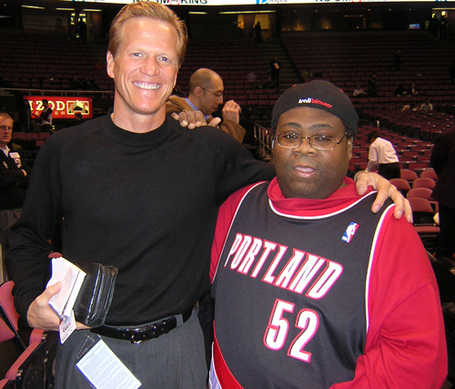 let me 1.st say hello to all my blazersedge
comrades all around the world 1.st thing i
would like to talk about is this team's identity
or style of play.my ? to all of you is do you really
know the style of play of this team on a consistant
basis.in my humble opinion i would like nate to
make this very young group into a defensive type
detroit*spurs style of play.1 of the problem's this
team has is you really don't know what blazers
team is going to show up on a nightly basis.
if nate decided this off*season to go a pure
defensive style and play to a 88-83 w's this team
would be scary.to back up my theory is the fact
that our team is very long and young,if you can
sell roy*aldridge*oden on playing a strictly defensive
style i promise you these kids will all buy into it.
2)-nate i know a lot of you guys are upset with his
style of play and coaching skills but a lot of as
usual dropped the ball on 1 most important fact
there is no pressure on nate to win a title for at
least 3 years.all of this foolish talk of a dynasty
in pdx is very unrealistic,sorry to burst a lot of
you people's bubble.in the nba it takes time to
become a serious title contender on  a yearly
basis.bird*magic*duncan are the exceptions to
the rule.even m.j. took 7 years to win his 1.st
of 6 and should've been 8 straight title rings.
b.roy*l.aldridge are going to be a leathal combo
but the blazers are missing that 3.rd wheel,a guy
like a k.durant would be perfect for this group.
when the draft was going to happen two years
ago i said durant would fit perfect with those 2
guys,but i understood why oden was the choice.
as time goes on g.oden should come into his own
as a defesive dominant force,as for his offense
i said if ask nate privately oden=14-16.pts and
10.5-12.5 rebs a game and 3.5 blks he would
breakdance down pioneer.sq.this is a message
to all the fans who really believed g.oden was
going to put up shaq #ers=28-11.5-2 a night.
stop dreaming g.oden is going to be a lot closer
to those #ers i predict for him than those unrelistic
shaq #ers many of you believe he would put up.
do i believe g.oden is a bust no,matter of fact
when i was chatting with m.rice 2 weeks ago
i said coach imagine him in 2 years from this
day-1/15/11 how he'll be and this franchise will
be at.he looked at me and said "scary very scary"
i could'nt agree with him more.folks the fans
especially the one's who jumped aboard during
the oden regime this message is for you be
patient,it's going to take at least 3-4 years to get
the pieces in place for a very long title run.
with p.allen-l.miller-b.koldhe and especially
k.pricthard making the moves and a fiancial
bankroll in place,this team has a legitimate
title windo between 2011-2017 to win at least
2 titles maybe 3.and as far as the crowds at the
rose garden aka"god's palace"it sometimes
gives me goosebumps.i love pdx it's the best
little city america keeps sleeping on,like i told
m.williams*m.rice kep it that way portlander's.
the last thing you really need out there is rift*raft
invading that beautiful city on the pacific coast.
keep up the great work blazers fans because we
have'nt even scracthed the damn surface yet
on how great this franchise is going to be.
so to wrap up my 1.st article imho nate should
go to a strictly defensive type team because of
the youth and length of the kids on the roster.
2)-roy*aldridge need 1 more guy to make this
team complete.3)-g.oden is not going to be a
shaq type of player more a b.russell type of
player.4)-this franchise is in great shape fiancially
and player management department.5)-the fans
have been sensational in pdx*the state of oregon
but most importantly at the rose garden keep up
the great work blazermaniacs.6)-and how can
i forget the most loyal blazersfans on the planet
the readers and contributors on blazersedge
without you i would'nt know any of you great
people and a special thank-you to dave for
asking me to write this article.and to you ben
for giving me a fair shot to talk to you about
the team while on was on my 1 year ban.
thank-you blazersedge and keep up the great
blogging and most importantly "go blazers".