Every so often, the television show Cops will bring you a life-changing episode. Generally, it goes something like...

Multiple squad cars pull up on a trailer park to find a 1980s big bodied sedan on cement blocks in the front yard of a trailer. The cops, guns drawn, knock on the trailer's door and a young woman wearing a long t-shirt with a graphic of Tweety bird and, apparently, no pants, answers with a dazed look on her face.  The officers ask where her boyfriend is and then proceed to barge into the trailer looking for him.

The cameras enter the trailer to find trash piled up knee-deep throughout the house.  Paraphenalia is strewn everywhere.  Weapons are hidden underneath the kitchen sink.  Then, one officer warily enters a back bedroom to find the boyfriend hiding under a bed and, while restraining him, they discover a young baby.

In the five or so minutes it takes for this scene to develop, the viewer goes from fetishistic intrigue, to excitement, to horror, to pity and, finally, to a state of complete and utter disgust at the family for neglecting and endangering its child in such a manner. By the time a commercial break rolls around, you shake the cheeto dust off your shirt and try to find a way to contact the show so that you can offer to adopt the child, to do something, anything, to help protect it from its parents.

Why am I writing all of this?

Because that family is the Washington Wizards and that child is basketball.

It's difficult to imagine a team caring less about winning or playing the game the right way than the 2008-2009 Washington Wizards.

It started with the most lackadasical warmup routine I've seen this year, starring an assistant coach who was practically begging Nick Young to focus for 5 seconds so he could hit at least 1 15 foot jumpshot out of a series of 7.  In the co-starring role: 7 footer Javale McGee, who, while practicing complex crossover dribble moves on the perimeter unguarded, was challenged by a teammate to make a 3 pointer for $100.  He attempted to take up this bet but, before he could launch a shot, found himself running across the court to track down the ball that he had managed to dribble off of his own foot.

Later, the crowd was treated to Deshawn Stevenson, who had scratched himself from tonight's contest due to lower back pain, shimmy-dancing in his seat (through the pain?) during multiple timeouts.

The Wizards committed 27 turnovers, most of them unforced; many were taken the other way for uncontested dunks.  They scored 31 points in the first half.  They demonstrated a practiced ability to hit meaningless jumpers during garbage time (from the middle of the 3rd quarter on) so that the game wouldn't look like a complete embarrasment in the final box.

Someone please save the game of basketball from this group.

1. Brandon Roy alleyoop dunk off the inbounds pass from Rudy against the Warriors

Nate's Postgame Comments
Nate on the team's defense: "Not bad. [laughs] I thought we came out aggressive. We had an opportunity yesterday to practice. Part of the timing and the rhythm is the fact that we've had a lot of guys banged up. We haven't had an opportunity to practice, it was our first live practice, we were able to work on some things. I thought tonight defensively we were aggressive. Everybody was up. Our weak side did a nice job of being connected, 21 steals is I'm sure is close to a high.  I just thought we were the aggressors on the defensive end.  Offensively, we started to get some movement in our offense. Some of our guys looked like they got their rhythm back."
Nate on the team's steals: "They were trying to attack in the middle, which is normally where the offense tries to go to.  I thought we recovered. They want to spread you out and I thought we recovered to the paint. In the first half, I think we had like 9 steals with them trying to hit us with their backdoors. Our guys did a good job recovering on the weakside, giving help and picking those off."
Nate on his reaction to the nice d: "We neeeded that. We needed to see that. We worked on it. They talk about it. Tonight I thought they executed that. Not only getting up and pressuring the ball but weakside being connected and just dominating the defensive end of the floor."
Nate on what he said to the team after the Cavs game: "I thought we waited to play in that game until the 3rd or 4th quarter. Then we started to scrap and play like we wanted that game. They were hot. That's a good team, one of the top teams in the league. LeBron was on top of his game."
Nate on how to build off of this defensive effort: "We want to see carryover. I thought tonight we came out very aggressive defensively.  Pretty physical, as far as bodying. They are a jumpshooting team so we needed to get into the ball. Nic and LaMarcus, those two guys had to cover Caron and Jamison, did a good job of crowding them and not giving them the space to get their shots off."
Nate on why the starters stayed in so long: "We were playing to win. That game was a 10 point game."
Nate on whether he was disappointed the starters had to play so long: "You want to put it away.  And if you don't then you leave them out there. The thing is get control of the game and win the game."
Nate on the poor shooting during the first half: "I thought we had some open looks that we normally knock down those shots.  They started to fall during the second half."
Nate on Oden: "We want to see him continue to improve. He's doing some good things as far as staying out of foul trouble. Rotating. Being a factor on both ends of the floor.  That has certainly helped us."
Nate on Rudy: "Well, He didn't shoot the ball well... his shots didn't fall tonight. Those shots he normally knocks down.  He got 1 three to go for him. He's done good things for us. He brings spark.  The ability to shoot the ball. Stretch the defense and make plays for us. We didn't know what he would make because this is his first year. The thing is let him go through the year and see what we have. Try and develop and put him in the position to be productive. I think he's done a pretty nice job."
Click through to check out pictures of the Wizards kicks.
-- Ben (benjamin.golliver@gmail.com) 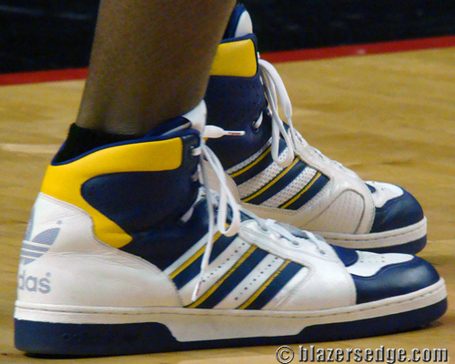 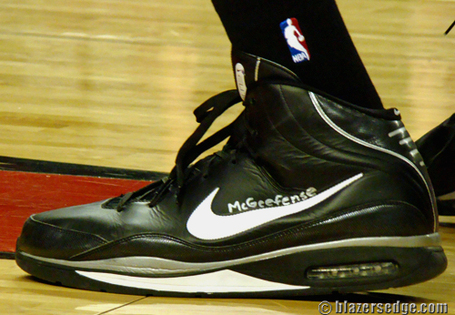 Javale McGee's -- yes, he wrote "McGeefense" on both of his shoes. 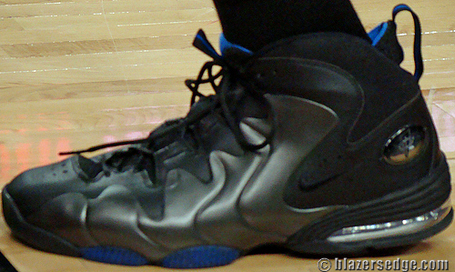 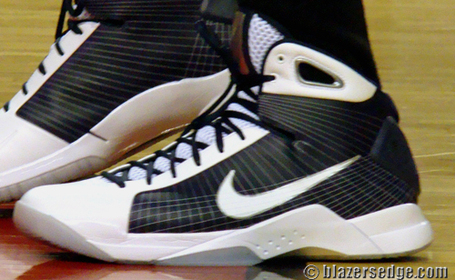 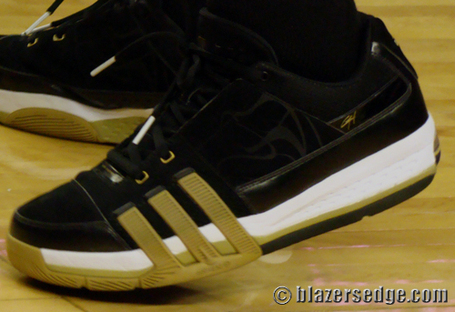 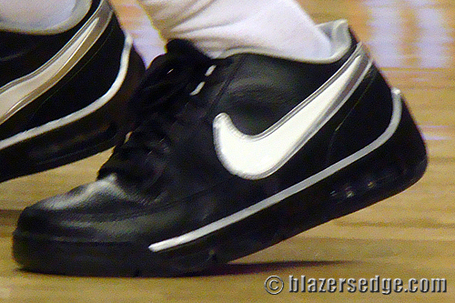 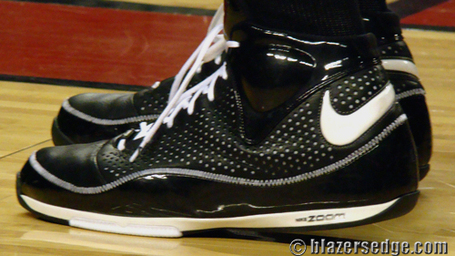 I forget who had these but they are pretty hot.