Bunch of stuff to get to today.  First things first, scroll down to see the latest development in the Rudy dunk contest preparation.

Second, if you are counting down to 5PM and have nothing else to do, check out this interview I did for Jack McCluskey of Jack of All Trades, a Boston blog.

Now on to the rest of practice. 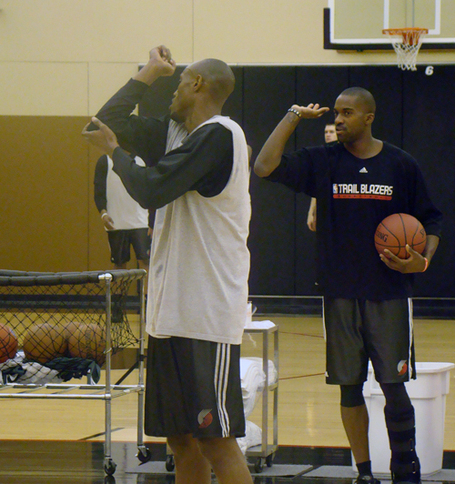 That word came out of Coach Nate's mouth for the first time today in response to Martell Webster's expected return date.  Like I wrote last week, Nate seemed to be a little bit dodgy in talking about Martell and now we know why: Nate now believes March to be a realistic time frame for Marty's return to game action.  As you can see above, the boot is still on and is expected to be on for awhile longer.

I entered practice right as the team was finishing up 5 on 5 halfcourt play.  It was the highest intensity practice I can remember seeing recently.  The defensive unit held the offense without a bucket on the last two possessions and received kudos from the coaching staff for their "shutout."

Brandon was on offense.  Travis was on defense and really going after him hard.  After the drill wrapped up, the team broke as it always does for post-practice shooting.  Roy ended up in Travis's group and they were talking a little bit of trash at each other.  It was funny stuff.  At one point, Roy said "I know the feeling when I'm getting locked up and that wasn't it."  Of course, Travis begged to differ.

A few minutes later, Travis had moved on to his free throws and Brandon was messing with him trying to make him miss.  As has been written, those two guys really carry themselves like brothers. 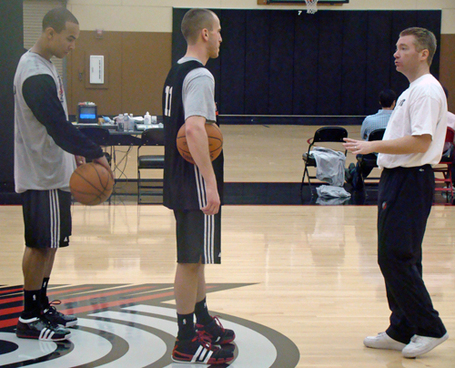 In the post-practice work, Joe Prunty was working with the point guards on the high pick-and-roll.  First he had them practice using the pick to get into the lane for a quick pull up jump shot.  Then he had them practice on what I'll call a "stagger dribble," which involves the point guard backing away off the pick with a single quick dribble, in an attempt to get the big's defender to switch onto them further from the hoop then they would like.  The points then went through their various options, whether it was crossing over the bigger defender and going to the hoop or looking to find their big rolling to the basket for a layup.

For all the talk about our defensive work on the pick and rolls, certainly our offensive pick and rolls need some help too.  Good to see both young guys getting extra reps.

Coach Nate on All Stars

Coach Nate was taking a lot of questions from various reporters regarding whether Brandon Roy and LaMarcus Aldridge should be getting All Star consideration.  Nate's feeling was that Brandon is a no-brainer and that LMA is borderline but deserves consideration given the Blazers' success and the numbers he has put up.  When asked by Brian Hendrickson to summarize his criteria for All Star selection, Nate said "You can't just be totally at the bottom. If your team is close, around .500 or so, then you can take that into consideration."

I asked Nate later if that meant Kevin Durant would be disqualified from consideration based on the "Thunder's" record. Nate didn't directly say no but he stated, "I would look at record, and then at numbers, I think there are players possibly at his position on teams with some better records that deserve to be there."  Sorry, KD, sounds like you've got no shot in Nate's book.

"Anytime a coach loses his job it's pretty much like a family member. You hate to see that. But it happens.  In our league, it's no different than what's going on in the country.  People are losing their jobs. And you never want to see that.  I'm sure he'll be ok."

Is Iavaroni the kind of coach that could land an assistant's job quickly or do you think he will wait for another head coaching position?

"I had a chance to work with him two summers ago with the US Olympic team, he was one of the guys that Coach D'Antoni brought with him. He does a lot of things. He brings a lot of energy. He teaches the game. Mike D'Antoni who he works with has a lot of respect for him and he might very well pick him up.

"Yeah, it's a possibility."

What is the protocal when someone gets fired?  Do you as a head coach reach out to that person via email or a phone call?

"A lot of times we send a text message or a phone call.  [Just to say] 'Keep your head up.  Good luck.'  Whatever it may be.  With those guys you know or those guys you don't know, you somtimes do that."

I thought Iavaroni was the most interesting personality in Seven Seconds or Less. If we had an empty spot on our assistant coaching staff, I'd be pushing to SPAM and go after him hard. Our young guys could benefit from his game knowledge and player development skills.  Oh well.

The man of the hour was Brandon Roy, who got his jersey retired yesterday by the University of Washington.  Check out Oregonlive for a great picture from the ceremony.