Today's Poll -- Which Do You Remember?

Share All sharing options for: Today's Poll -- Which Do You Remember?

Something funny happened yesterday at practice. One of the out-of-town reporters was questioning Brandon about LeBron and slipped up, started a question by saying, "Last year here in Portland you got the better of LeBron..." and his voice trailed off pretty quickly because Brandon was already giving him the gas face. 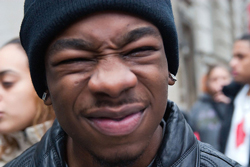 "Oh, that's right," the writer was scrambling a little bit and you could almost hear him thinking... "the Cavs did beat you last year... and, oh, that's right.... LeBron did make the game winning layup on your home court... whoops!"

Eventually the conversation got back on track but it was another example of Brandon's pretty-much photographic memory when it comes to losses, and not just marquee matchups like the Cavs. He's got a game catalogue in his head: earlier this year, I remember him spouting off the gametimes of games played more than a year in the past. Surely that's a result of his competitiveness and focus.

What I'm trying to ask is: is that normal? For NBA coaches, I'm sure it's the exact opposite: the losses are much easier to remember than the wins. But what about you? Vote in the poll and then let's talk in the comments.