I'm running on fumes tonight after a long, busy weekend and a solid 102-85 home win over the Milwaukee Bucks... so we'll cut straight to the game notes.
Random Game Notes 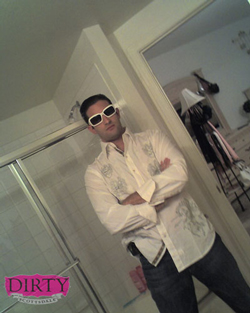 Nate on Greg Oden: "Great game for him tonight, I thought he was really active tonight, moving his feet, both ends of the floor, just very active, those are the things we are looking for from him.  Now looking for the carry-over, to carry that over into our next game."

Nate on whether it was a nice rebound from the loss to Charlotte: "Yeah. Getting back home, protecting home court, we have 5 of our next 6 games at home. What we talked about was trying to protect homecourt, we get tonight's game and now we'll prepare and get ready for Cleveland on Wednesday."

Nate on whether LaMarcus is an all star: "There's work to be done. He's doing some good things. I think he can be better. LaMarcus has the type game that he can be effective on both ends of the floor. The offensive end as well as the defensive end.  Rebounding. Tonight: 22 points and 9 rebounds. I think he can do that pretty much every night. Double doubles."

Nate on Greg's key tonight: "One of the most important numbers is the 2 fouls.  He did a good job of getting deep post position, scoring and rebounding the ball.  This is one of the first games where he has finished a quarter with 1 foul.  He was productive in that first quarter.  The 3rd quarter same thing.  He did a nice job playing  both ends of the floor without getting in foul trouble. It gets back into moving his feet. I thought he was really active tonight in moving his feet and not getting caught standing up trying to guard penetration, slowly rotating to the ball.  I thought everything tonight was early, quick, and he was great."

Nate on what's next for Greg: "Now we want the carryover. We will have a good tape to show him some of the things he did well, as far as rotating to the ball, being big, blocking shots, playing on his toes, offensively getting deep post position and making good decisions with the ball."

Nate on the team picking up with Brandon not scoring much:  "It's nice to have other guys step up and have other options.  Tonight Greg and LaMarcus did a nice job of establishing themselves in that post.  We had some other guys who scored.  Brandon is still searching for his rhythm.  He missed some free throws throughout this game.  We missed 10 tonight. There are going to be nights where Brandon doesn't have his rhythm, that ball is not falling for him, and we have other guys that we can go to and tonight they were pretty productive."

Nate on why LaMarcus sat during much of the fourth quarter: "We had a combination that was working. Greg was the big, Travis was the power forward with Brandon, Sergio and Rudy. That lineup was working for us."

More Nate on Greg: "You've got to be able to stay on the floor to do that. With 2 fouls tonight he was able to stay on the floor. I thought he was active tonight, I love his aggressiveness, being alert and rotating quick, he wasn't late to rotating penetration tonight, he wasn't late rotating out to the screens, I thought he was pretty patient in the post with the smaller players. They tried to flop and draw some fouls on him and he was just under control, he knocked down his free throws. Just a really good game by him." 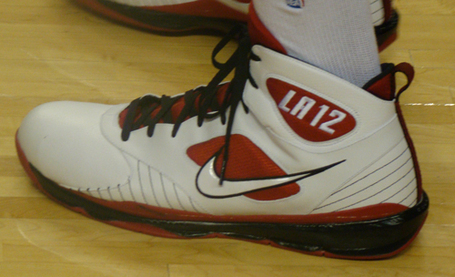 First time I've photographed LMA's new kicks.  I say "new" but I guess he's had them for a few weeks; Casey tells me I'm wayyyyy late on these. 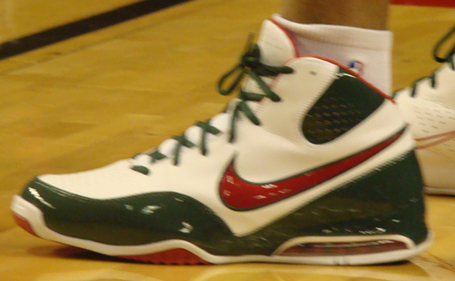 Best shoes on the Bucks?  R. Jeff with the Christmas Nikes... too sick. 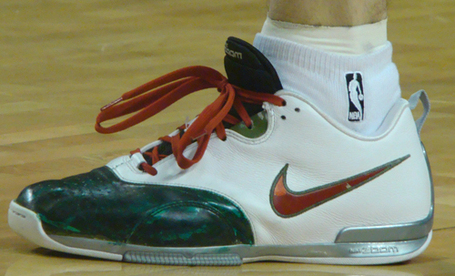 Ridnour gets the silver medal. White boy got (shoe) game! Sort of . 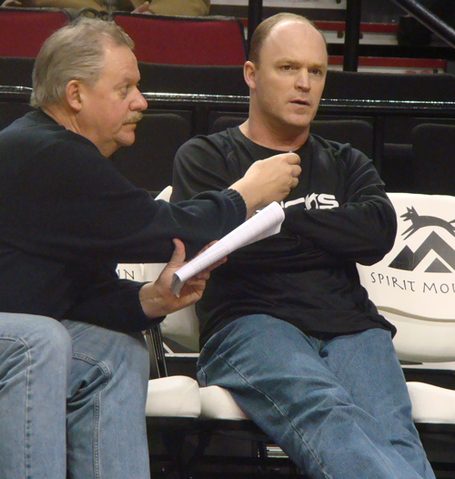 Here's a serious question: Does Nate McMillan own a pair of jeans?  He has at least 25 pair of warmup pants in black/red/white/grey.  But jeans?   I'll have to do some checking on that and get back to you.