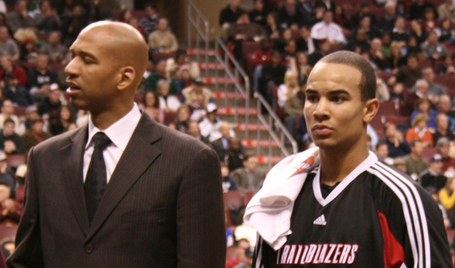 There was all sorts of speculation in the various threads last night about Bayless's timeline and development given his big breakout performance against the Nets. Quick called Bayless's play "dazzling" and quoted Brandon Roy saying...

"I think the young fella is ready to go," Roy said. "Throw him out there, throw him into the fire. That's what I say."

That's not a small statement. Brandon Roy has pull. So I'm with B Roy as we wait for Steve Blake to come back. But this is obviously still Steve Blake's team. But given Blake's age and skill set, it won't always be, right?

Let's vote on Bayless's timeline and then discuss our thoughts regarding his ideal development in the comments. How would you bring him along? Throw him to the fire? Take it slow?