An abbreviated version tonight as I'm feeling a hangover effect from yesterday's Darius ridiculousness and because the Warriors don't play defense or rebound, therefore it's hard to write meaningfully about this 113 to 100 victory, other than to say LMA killed, Brandon Roy was back and looked relatively good (he seemed quite happy after the game and is looking forward to the easier schedule just like the rest of us) and a W is a W. I'll take it.

If you're sick of the D Miles stuff, I totally understand (put yourself in my position).  If you don't want to read about it, simply skip down to bullet point 7.

Nate's Postgame Comments
For the first time that I can remember, Nate came in and, without a prompt, issued a statement.  Here it was...

Look, first, I want to just say I just got some news that a fan of ours who I met, Katie Shearer, is not doing well and our thoughts and prayers are with her tonight. I had an opportunity to meet her a couple of weeks ago. She's a huge fan and she knew this was coming but she's not doing well and we just want to say that we are thinking about her tonight.

Nate on whether the team was distracted by the Darius situation...

It didn't seem that way. The first half was just... we needed energy, we were getting good looks, we couldn't put anything in the basket, the defense was pretty good but we just couldn't get anything to go for us early. Then we were able to get that run in the second quarter to put some points on the board but I thought tonight we did a nice job of executing the gameplan, not turning the ball over, rebounding the ball, attacking them, winning the free throw line and keeping them off the free throw line.  We were able to beat this team, a scrappy team that causes all kinds of problems, but we made the adjustment and were able to control the game for most of the game.

Nate on what sparked the increased tempo.

Nate on whether the team was looking to run.

We didn't want to get caught up in the run and gun game. There would be opportunities for us to run but if we didn't have anything going to the basket we wanted to setup and run our offense and go inside. We felt like we would have opportunities but not jacking up quick shots. We played in the middle of the clock last game, we shot the ball a lot between 20 and 15 seconds on the clock and that's the game they want that type of tempo.

I tried to keep him around 20 to 25 minutes [much laughter as he played 30+) and he said he felt better and he wanted to continue to play and he just gave us a bounce. He was able to help us close the fourth quarter. We needed that. They got within 5 and we gave him the ball and allowed him to make plays. He got to the free throw line which really broke the ice and that allowed us to get a basket and get the crowd back into the game.

Right now he feels ok. I talked to him right after the game. He said he felt good. As the game went on he felt better and wanted to play.  Rudy same way.  Basically, [trainer] Jay [Jensen] was telling me we needed to pull him but he started to make plays. Those guys play through it.

I think he's a big key to us having success. I told him that, going through him in the post, LaMarcus establishing a low post presence force is very important. He's been able to do that these last few games and tonight he did a good job getting to the basket and scoring in the paint and forcing them to have to double team and mix up their defense against him.  He's our number one option as far as establishing how we want to play.

Nate on whether it was difficult to cut down the rotation.

No.  We get back to what has worked for us.  The faster we can get to that rotation so these guys can be comfortable with their roles again the better we'll be.  Once Brandon came back, Rudy moves to the back up 2 and we go to our 4 guard rotation.  I was able to slip Bayless in there a few minutes tonight but it's about getting the guys out there that are going to give us the best chance.  We know we have some guys that are capable but tonight I did shorten the rotation because Travis played more 4 than 3 and I want to continue to look at that. 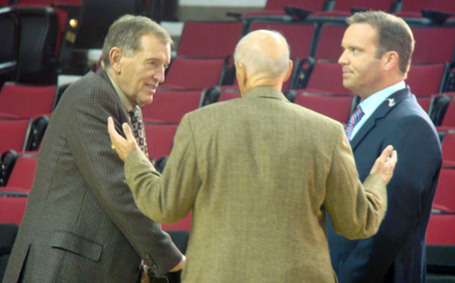 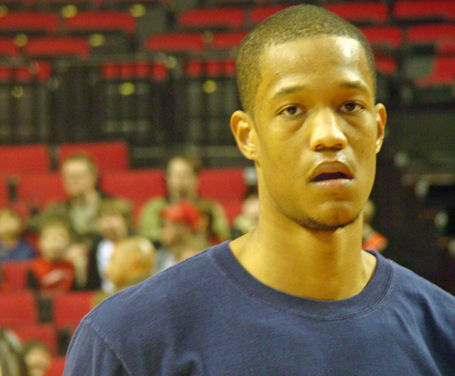 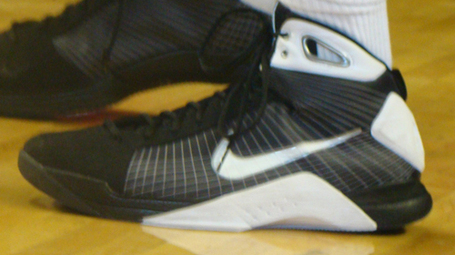 Anthony Randolph has huge feet. You have a dirty mind. 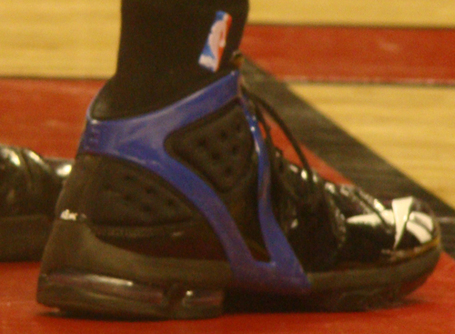 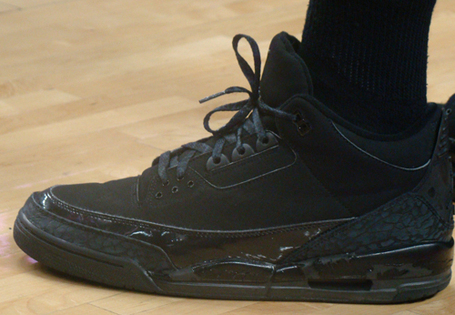 My bad, I forgot whose these were again. 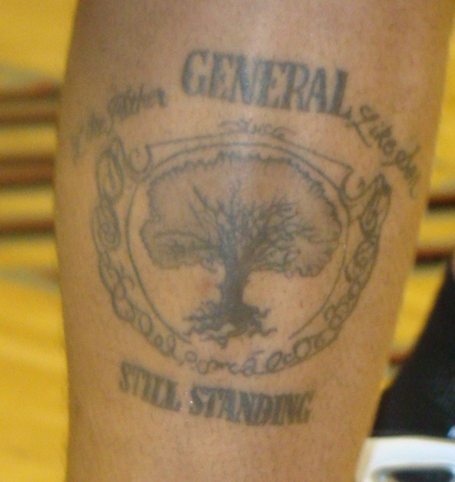 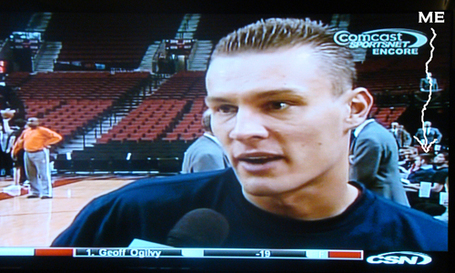 Some of you have asked how I get these kicks and tats pics.  Please see Biedrins picture.  To my left is Mike from Blazers.com and to my right is Sheed from Bustabucket.  BAB was there because they scored a hot pregame interview.  Check their site for that in the next day or two.