Media day is out of control.  In lieu of a synthesized all-encompassing post (which would be impossible), I'll offer the following preliminary notes, with links from around the Blazersophere updated at the bottom as stories start to roll in.

Some context: media day took place in the Courtside Club at the Rose Garden.  There were two tables set up for players to answer questions. There were probably 50ish people there, eager to ask.  "Herd mentality" does not begin to describe the atmosphere.  It was a barrel of monkeys.  Good times.

-- Brandon is nearly 100 percent healthy.  He wants to play during pre-season games, contradicting earlier reports from Coach McMillan that he would probably not play. Brandon seems to always say he will play (which he should) so chalk this up as "wait and see."  My guess is that he sits for most if not all of the pre-season.  He has already returned to 5 on 5 full court scrimmages.  And, according to Greg, Brandon won a few games against Greg's teams by hitting the final shot.

-- Greg Oden is a large man. It's funny how often we've heard that over the last few weeks, from various reporters seeing him for the first time.  But there is no other plausible reaction upon seeing him.  Greg is big.  Bigger.  Biggest, really. This was the first time I'd seen Greg since the end of last season, and the first time I've seen him in team apparel, which for some reason makes him appear much larger than in street clothes.

-- Jerryd Bayless is everything I had hoped for, and more.  See below for an imagined monologue interspersed with a few of his answers.  JB's confidence cannot be understated, that would be impossible.  He is smooth, polished, like a petoskey stone. JB talks the talk, yet he does so with the confidence and absolute certainty that he will walk the walk.  He talked easily about his time on the US Select Team.  He referred to Chris Paul as "Chris", again with ease.  In a moment of sheer honesty, he made it known he wanted to make the 2012 Olympics team, and he said it in a way that made his prospects seem better-than-likely.  He also name-checked El Gaucho as his favorite restaurant and said he's taken up residence in Lake Oswego.  Jerryd is one of the largest personalities on the team, already.

-- Rudy was absolutely mobbed, once again.  He really attracts a crowd, it's something else.  Chalk it up to sex appeal?  Hard to say.

-- Jason Quick attempted a Phelpsian freestyle stroke through a wave of hipster journalists as he worked his way closer to Greg Oden, who was surrounded by a 3-deep crowd in every direction.  John Canzano, Olympics veteran, stood nearby, chuckling his support.

-- Dwight Jaynes, blogger, was in attendance!  Kerry Eggers chatted with him. The world did not stop moving. Here's Dwight's take on Media Day.

--  Brian Hendrickson was once again putting in work, this time breaking out the digital camera to capture the new Duckworth Memorial Patch.

-- No one mentioned the ecomony.

-- The Blazers new warmups are sick.  They look great. Arguably the best apparel Adidas has ever made. It hurts to say that because I've long been a "nike > adidas"  guy, especially when it comes to jerseys.

-- The Blazers once again pulled out all the stops, just like the Rudy press conference.  There was a great food spread: spectacular chicken tenders and salad wraps.  Becoming a champion is all in the details.  They got these details right.

-- New media guides are out!  Hooray! Here's the cover starring the 3 players least likely to be traded... 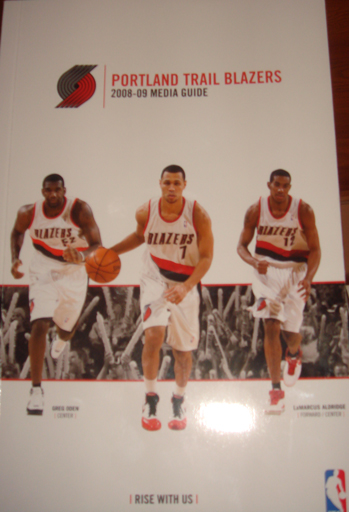 Meet the Blazers -- (another great Jerryd quote, on the rest of the NBA... "They are all humans."  He said this completely seriously, nearly implying that he himself might not be human.  It was fantastic.)