I'm trying to resist feeding you the story about a plucky, young team of good guys playing without its star standing up to the big, bad, menacing champions and eking out a victory thanks to hard work, determination, team play and grit.  Thanks to Hollywood, you've got that story memorized.  But you did see that familiar storyline unfold tonight. And it was still beautiful.

The final count was Portland 91 Boston 86 and truth be told, if you weren't watching the game and only reading the text messages that the team was sending out before and during the game, you'd never have thought Portland ended this one on top.

"The Trail Blazers place Shavlik Randolph on the Active List and Brandon Roy on the Inactive List for tonight's game with Boston."

""Season low scoring in a quarter for Portland with 13."

And if you stood near the locker room hallway as the Celtics took the court, you'd have declared the Blazers dead on site.  You know how some people ooze confidence?  The Celtics seep, overflow, spurt, leak, and discharge confidence. They look, walk, and talk exactly like you would expect from world champions. I changed pants 3 times and the game hadn't even started yet.

Although Nate made a comment during the postgame that he had to go down the entire roster -- including Channing and Shavlik -- to hand out game balls after this win, LaMarcus Aldridge's resiliency was the difference.  He started out an ice cold 2 of 7 in the first, was an ineffective 1 for 3 in the second, and was an awkward 1 for 5 in the third. But he finished with a sparkling 5 for 7 in the fourth quarter, with basket after basket down the stretch, showing confidence, assertiveness and the ability to get buckets when they are ABSOLUTELY needed -- none of which I can remember seeing before.

We shouldn't overlook Blake's hot shooting, or Greg's double-double, or Bayless's first extended run (mixed results, but he did adequately fill big minutes left by Brandon's absence) or Travis's 6 fourth quarter points.  But tonight belonged to LMA.  In the locker room aftewards, he was barely moved by his own performance, stating that his gameplan tonight was to "hit [Garnett] first" and not look back.  He hit first, last and many times in between.   That fearlessness in standing up to Garnett -- they earned double technicals with less than a minute to play -- was as big as any basket that he made or any rebound that he grabbed.

Nate's mood tonight was super satisfied.  He had sweat through his shirt and, while posing for a picture with a young fan after the game, he had absolutely no need to force his smile.  Was there any particular coaching decision that makes me feel like Nate won this game for the team?  No.  But it absolutely felt like this was a Nate win.

Nate on the result: "I said it before the game, there was no secret to what we needed to do tonight, and that was beat this team. They don't beat themselves. Any time you're facing a team like this you've got to out-scrap them, you've got to out-work them. Execute. Limit your mistakes.  We turned the ball over a little bit throughout that game but we were able to come back and make up for it by getting some stops and making plays. I thought we really looked confident out there, we didn't look rattled. We pretty much stayed poised throughout the game. If we gave out game balls, you could give them out to a number of guys tonight. I thought all of our guys came to play tonight."

Nate on the team's toughness: "We have to scrap. We're not a physical team.  But we should use our energy and our speed to overcome the lack of bulk and physical play. I thought tonight we did a good job of getting up defensively, bodying those guys, and not giving them anything easy, as far as post ups or clear looks on the perimeter.  The physical player on our team is Greg. The one guy, and Joel can play that style, we needed that down in the paint.  We needed that down in the paint. I thought our wings did a good job of staying close to Allen and Pierce, our small forwards made those guys score over the top."

Nate on getting the win without Brandon: "It's great.  It really is. We're without one of our key guys and we talk about this all the time: you play the game one way, you play it hard. For us, scrap every single night. Don't get out-worked. Play together. If you do that you have a chance at winning games."

Nate on coping without Brandon:  "We needed guys to step up and play. Rudy got into the rotation. Didn't shoot the ball well in the first half but made some plays in the second half. Bayless who hasn't played all season long came in and gave us some good minutes of attacking and doing different things. LaMarcus didn't play well early but settled down second half and gave us something in the paint. And Greg, Greg I thought he was under control, a solid game on both ends of the floor."

Nate on LaMarcus versus Garnett: "We want to respect but we don't want to fear anybody. We don't want to be intimidated. I thought tonight our guys came out and played. LaMarcus -- this is part of the maturing and growing and seeing Garnett for the third year -- six times.  Getting a feel for what these guys do on the floor. I thought tonight he was under control, right from the start he was aggressive. The head game-- he smiled at it.  I thought they were both chatting and talking and fouling and going at each other.  The main thing when you do that is to keep your focus. And LaMarcus was able to keep his focus and stay within his gameplan."

Nate on the Twin Towers of Oden and Przybilla together on the court: "We've been thinking about that and Greg was giving us something good, I thought our bigs could guard the bigs they had on the floor and what I wanted to try to do was get LaMarcus back in that game against their second unit. So I was looking for Greg to buy about 4 or 5 minutes at the end of the third quarter and it worked out. Both of our bigs defend and we ended up scoring like 6 or 8 points with that group.  We just played good basketball."

Nate on forcing Boston to work: "That's what we've got to do. Every game. Not jus the Celtics. Every game we've got to play that way. Outscrap teams. We can do it.  Don't get intimidated by who you're playing or their record or the player. You come out and you play them. The one thing about teams like that is that you've got to beat them and tonight we did."

Nate on whether this is a step for LMA: "I hope it is for all of us. For the team. For our players. Blake playing against Rondo.  Of course LaMarcus going up against Garnett. Greg playing against Boston. Travis and our guys having to guard Paul Pierce.  For us, yeah. For LA, we talked about taking that next step and this should help him."

Nate on physical play: "I thought we got to learn to play the game and make the transition to play that type of game every night.  Once we can do that, we will start to win games.  Get to the place that we want to go which is the playoffs. I thought that was playoff basketball. And now being able to sustain that.  Being able to mentally play that way every night without having the champions or the Celtics come into your building." 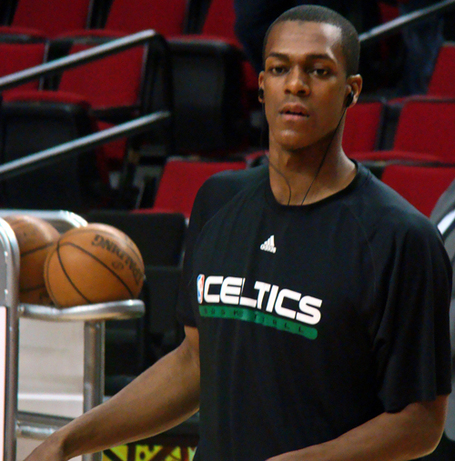 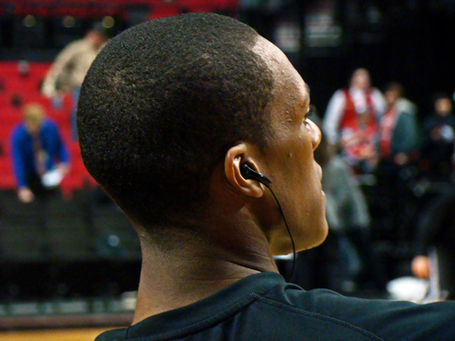 Up real close -- couldn't quite hear his pre-game music. 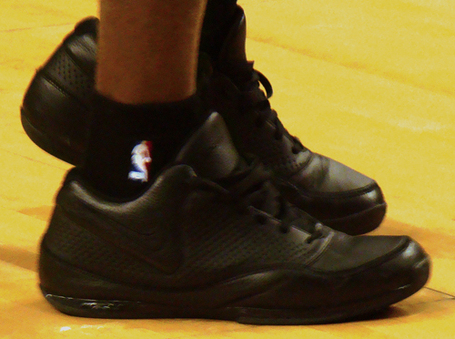 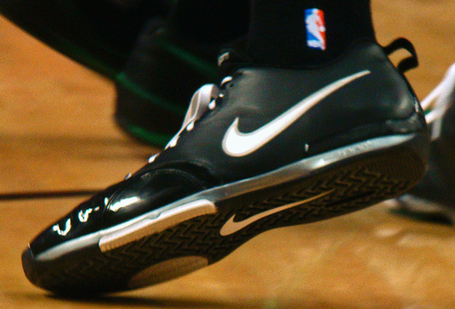 Pretty sure these gems were Scalabrine's. 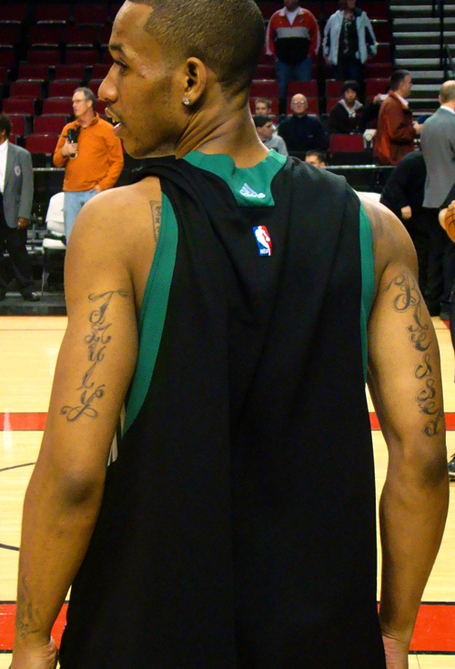