Last night's game was all about Greg Oden, from start to finish. A few weeks back, I was surprised that there weren't more calls for Przybilla to re-enter the starting lineup. This weekend, John Canzano made a very public case against Greg Oden. Greg answered back last night, with 16 points and 10 boards on 5 of 7 shooting and a massive block shot down the stretch. Greg and LaMarcus combined for the first 14 Blazers points and when that happens, it's going to be problems for whomever we are playing.

This 102 to 89 victory turned when the Raptors went a Cretaceous 4-18 from the field in the third quarter. If you play a full game you can beat the Blazers in Portland. If you only play 3 quarters in the Rose Garden, forget about it.

The other highlight tonight was watching Brandon Roy show Anthony Parker and Jamario Moon just how easy it is to put the ball in the hoop. 14 for 19 for 32 points. Once again B Roy was firing on all cylinders and you almost had to feel bad for Parker, who had absolutely no chance. Both Nate and Brandon talked about the single coverage that Brandon faced... be sure to scroll down and check that out.

Nate was very gregarious. Greg was also in a very good mood, the best I've ever seen him after a home win.  Greg took questions in front of his locker for more than 5 minutes.  He looked more than comfortable doing so.  First time I can write that all season.  Great sign.  Also, be sure to read Brandon's unqualified praise of Greg, also the most positive postgame statements from Brandon about Greg's play all season.

Nate on the result: "Every time we match up against them, it was a very similar game in Toronto, where they had control in the first half. We had to fight back. Great shooting team. They can put the ball in the basket. They have an inside presence and they can shoot the ball on the perimeter. I thought our guys tonight came out aggressive defensively, they made a ton of shots in the first half. We got closer. In the second half we felt like they would start missing those shots. And they did. It turned around for us offensively. We were aggressive moving the ball and knocking down some shots. Tonight defensively is where it started for us."

Nate on the defense: "It was better but we need to get even better. I still didn't hear them and see it the way we need it out there. They are working on it. But we've got to get better."

More Nate on the defense: "We held this team to 32 points in the second half, I know they played last night, but they were on fire in the first half. The second half we made the adjustments we needed to make."

More Nate on Greg: "As I told him, ‘unwrap yourself.' Take the cover off. Let people know who you are. He's got a great personality. He's a good person. He wants to do well. Let them know who you are. He went out and played. Had some fun with it. This is the year for him to have fun out there and I thought he played a good game tonight."

Nate on Brandon: "Brandon, we've seen that. He had a rhythm. We wanted to keep their bigs in pick and rolls tonight. He had the option of calling it off if he felt like they were trapping or just clogging up things. He made the right calls. A couple of times he had the iso and felt like he could beat Moon and made the shot. We needed that."

Nate on getting Greg off early: "We want to go inside. Start with LaMarcus. If either one of our bigs are open we want to get them the ball. We ran some sets for both guys, they got deep post position. Plays were called. We were able to drop it. Our first option is to go inside to LaMarcus or Greg. If we don't have that then we go into our pick and roll sets."

Nate on the Raptors not doubling Brandon: "We talked about that during one of the timeouts. I think they were thinking about it. We thought around the 3 minute mark he had made a couple of buckets, that the Raptors may go to that. I saw them talking about it from the sidelines, it looked like Bosh wanted to go but they just didn't know how to do it. Most teams don't practice that. Very seldom do you run out and just go get a guy. We talked about it, if they did double team what we wanted to do. We talked about it. Our guys should have been ready if they had done it. But we would have had to see what happens."

Nate on whether this was a turning point for Greg: "It's going to be a different challenge - he will see Boston for the second time on Tuesday. This year is about him playing and going through it. He has been outplayed some games. He's still learning. Sometimes you tend to play well against certain teams."

Nate on whether the physical play helped Greg: "Yeah. Whatever it is. I like what I saw. O'Neal is very physical. That hard foul he had on Greg - Greg just walked to the free throw line. It didn't even faze him. That is the mental part of the game. We've got to be able to play through a hard foul. OK, I'll get you back. Let's step up and knock down the free throws. "

Nate on whether Greg is turning a corner: "I think it will come. It's going to come. You expect this with young guys who are playing everything for the first time. This is a major role, to be a starter in this league where you go up and down. He continues to work. I thought tonight was probably his best game. He played both ends of the floor. Wasn't in foul trouble. Looked under control."

Nate on the defensive improvement: "I thought it was forward. We got to get better. There's still some things we've just got to improve on. Ball pressure. Weakside help. Continuing to talk and communicate. Rebound the ball. It was better tonight. We've done this before but we've just got to be consistent."

Nate on what worked defensively: "I thought the closeouts were better, we were closer, I thought our reads a couple of times -- we double-teamed O'Neal and we got out, we just need to finish the play with the rebound."

Nate on turnovers: "One of the things I definitely wanted to mention was our turnovers. 4 in the first. 4 in the entire second half. That's always a key."

Nate on Boston: "I think it's good for us. One: to continue to protect home court. Whenever you go into a game like a team against Boston, going in with a win and some confidence is much better than dropping one. We know they are the defending champions and they have dropped 2 games. They play again tomorrow night before they come here. We should come in here with some confidence."

Greg on his performance: "It was pretty good. I came out there and just wanted to play hard and play with effort."

Greg on the physical play: "It's always good when you can play against someone physical and I can hit him and he can hit me back and he's not going to do all that flopping stuff. Bigs don't like that stuff. It's nice to go in there and actually battle."

Greg on Nate's advice to him: "Coach just told me that when you start off a game the refs see that that's how you're going to play and hopefully that's how they allow me to play."

Greg on his recent foul trouble: "These games that were said to be bad games, I started out pretty well with good energy and then I got in foul trouble and I'm on the bench. It's really nothing come back from that. Those definitely don't help me out."

Greg on how he feels: "I've just been coming with a lot of energy. Talking and my body is feeling great. It's no problem there. Just go out and play with energy and do what I can and try to rebound."

Greg on Nate's pregame speech about talking louder: "He always tells me to talk more on defense. It was me and Nic and we give our scouting reports of the players that we are probably going to be guarding. Me and Nic said our things and we're sitting up here. I guess Coach was standing back there, he was just like ‘look, if you all going to be out there on the court, there's 20,000 people out there, you all need to talk louder, I'm sitting right here with a refrigerator motor and I can't hear you, speak up."

Greg on his on-court communication: "I feel like I'm yelling anyways. Sometimes it's difficult with all the running and moving, but I tried to do it."

Greg on whether this was a turning point: "I would like for it to be. I'm trying to turn myself around and start playing more consistent and better and not foul out."

Brandon on whether it was nice to go against single coverage: "It was. Every time we came to the huddle, Coach was like, if they have single coverage keep going, if they double-team we wrote up a couple of plays to try to get a shot. It was tough with the single coverage and i was able to get some good looks off."

Brandon on whether he was surprised not to be doubled: "Yeah, I was a little surprised that they didn't do some type of double team. Coach always says every game is going to be different. Hopefully I continue to do it and keep trying to improve. My thing is to get better at reading how they are guarding me."

Brandon on Greg: "He was comfortable tonight. He looked like he was finally at home out there. He wasn't thinking too much. He was catching on the post and looking to his move right away.  Defensively he was just changing shots and being big inside.  He played well against Toronto last time.  He just needs to keep going out there and being comfortable, it's basketball. He knows how much he means to this team."

More Brandon on Greg starting to loosen up: "I been noticing hanging out with him in the training room, he's kind of laughing, more relaxing, understanding that it's just hoop, and he'll get more comfortable, I continue to say there's no pressure on him. I think he's starting to believe that with how we're trying to play. When you're ready, take over and until then we'll keep trying to hold the load."

Brandon on the stretch: "Single coverage man.  [laughs] One on one.  It was finally fun to do a move and not see a dude run at me.  I'm not saying that's the total secret, my shot felt good tonight. I was really disappointed in the Dallas game. I went home and was like man, I felt like I let my team down in the fourth quarter. Tonight I wanted to make sure I was ready to make a push late in the game." 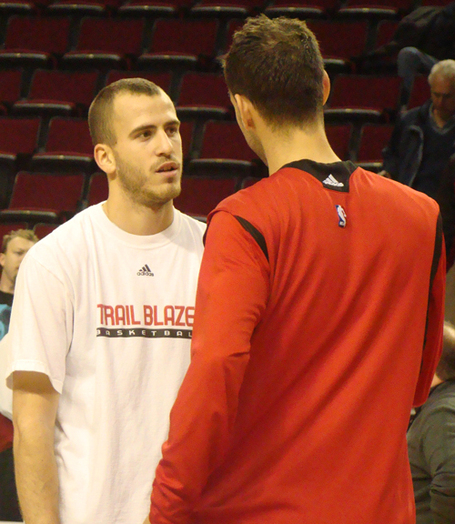 Pregame meeting of the Spanish minds: Sergio and Jose. 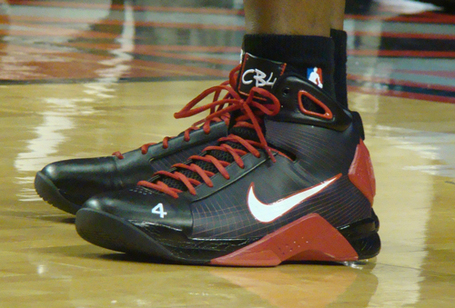 The Raptors sport some broke kicks. Only Bosh was looking proper.