That 102 to 94 loss to the Mavericks was ether for the Blazermaniac's soul as a loss seemed unthinkable in the buildup and early stages of this game.  But, pretty quickly, all sorts of trouble signs emerged.  LaMarcus was a non-factor on offense during the entire first half.  Blake brought back the jump pass as a White Elephant present.  Batum continued to do basically nothing.  Channing made James Singleton (Didn't he direct "Boyz N the Hood" like 15 years ago?) look like Karl Malone.

Not to mention that JJ Barea just had the single greatest 4 for 13 performance in the history of the NBA.  How are you going to overcome that?

The bright spots tonight were the team's toughness and poise during the Przybilla/Howard altercation in the 3rd quarter (did you see Bayless frothing for some blood from the bench?), Sergio's overall game (minus the two silly quick fouls), Rudy's all-around game (punctuated by a great hustle play on defense that ended with him running about 5 rows deep in the stands) and Greg's first 8 minutes which, while not perfect, might have been some of his smoothest time on the court against a high-calibre team.  His night tailed off pretty quickly after that, however.

Apropos of nothing, I hope you saw Kevin Arnovitz over at TrueHoop write, "Sergio Rodriguez would start at the PG for half the teams in the league."  Please debate that in the comments.  Nothing I write here will stir a pot more than that sentence.

Abbreviated game notes tonight because, you know, it's Christmas...

Nate on the result tonight: "They went to a 3 guard offense. We knew they would, we thought they would go to that lineup with Barea and Terry and Kidd and run pick and roll sets. That's pretty much what they did.  Barea did a good job of getting into the paint creating some offense and running down second shots for them. The key to the game tonight for us was we knew they were a great rebounding team.  That was an emphasis tonight. We just didn't recover to the paint to box those bigs. Whenever our bigs went to rotate to the ball, you've got to crack down and give your body up and box out. Their bigs.... 16 offensive boards, not just their bigs, they beat us to the ball tonight."

Nate on whether the team relies on Brandon too much: "We've got to go other options and we are going to go to our best option. Brandon is our best option. If they take that away then other guys got to make some plays. We went to LA in the second half. He didn't have an attempt at halftime and was able to get something going. Foul trouble was there.  When the opportunity presents itself you go to it.  You gotta knock it down. You've got to make something happen.  It's no different from what other teams are doing.

Nate on whether Brandon let the refs get into his head: "No. I thought he got hit a couple of times. That last play, when he went into the body and drew the contact, Dirk got that same call in the first half. It was identical. No. I think Brandon does a good job of handling himself with the officials and he's going and giving up his body and he's getting contact and sometimes there are no calls there.  I think he's been pretty good with the officiating." 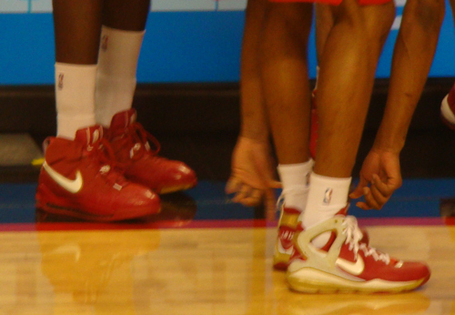