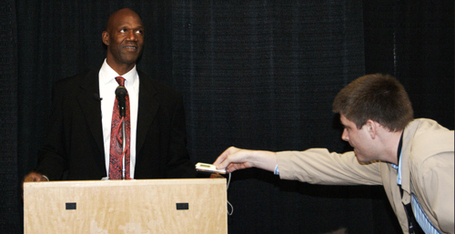 Eighties babies came of age at just the right moment to enjoy the sustained excellence of the early 1990s Portland Trail Blazers. These children, indoctrinated as the next generation of true Blazermaniacs, were brought up in a homogenous utopia where crime and poverty were relatively non-existent and the only things to complain about were the rain and the referees.

Ask these children about their earliest memories and we can't recall "Read my lips, no new taxes" but we can tell you about the long-gone Memorial Coliseum, we can recite the lyrics to the misguided "Bust A Bucket," and all of us, without question, know the secret to winning basketball games: you've got to make your free throws.

The team that introduced eighties babies to basketball was led by a SuperDuper star of the highest order: Clyde Drexler.  He floated and flew well above the floor, way over our heads. Clyde looked eye to eye with immortals like Magic and Michael. We looked on in awe. The man could dunk on a 12 foot goal.  How does a 3rd grader relate? That's, what, like two bunk beds? True appreciation was not possible -- his gifts were not of this world.  And they were recognized by the team before we had a chance to adequately process them.

The man, the mortal, that shared the backcourt with Clyde was Terry Porter. He with the extra hours after practice.  He with the fearless drives to the hoops.  He with the hugs and shouts for his teammates.  In Terry's image, the parents of many eighties babies saw their children. In Terry's image, eighties babies, as we grew up, started to see ourselves.  In Terry's image, youth basketball coaches of the early 1990s saw their players: the essential values were toughness, confidence, and dedication.  Those values translated to any court -- from elementary school to the NBA Finals.  Just look at Terry.  Watch how he does it.

Eighties babies aren't babies anymore.  We're getting older.  Some are balding.  Some are sporting spare tires.  Many are getting wistful.  Pulling out the old basketball cards.  Dusting off the Dairy Queen glasses.  Piecing together memories from old VHS tapes and ratty t-shirts.  Finally comprehending Drexler by accumulating enough hours watching basketball to put his greatness into perspective.

For a generation of Oregonians and basketball fans that are only able to know 1977 by reading the textbooks and listening to the oral histories,  Clyde, Terry, Jerome, Buck, Duck and Cliffy have always been the pinnacle.  To consider what came before is impossible; to compare what came after is, simply put, incomparable.

From 1989 to 1993, eighties babies had it just about perfect.  But it took many of us 15 years, hundreds of games, to realize how good we had it.  How good it was to have Terry leading the entire state, even Clyde sometimes, into battle.

Terry Porter put his stamp on this franchise and city and tonight, at long last, he was recognized.  His number 30 deservedly entered the rafters.  A generation of fans -- alongside their parents and children-- followed him, cheering, yelling his name, just like we learned to do when we were young.