Share All sharing options for: Media Row Report: Blazers For The Loss

Joel Przybilla was kicking at television camera cords that were running across the ground in front of his locker.  Shavlik Randolph was despondently text messaging on his cell phone.  Jerryd Bayless was accidently dropping his (Gucci?) toiletry bag, nearly spilling its contents, and mumbling to himself over his carelessness.  Brandon Roy was surrounded by the media hordes, explaining, for once, what went wrong.  LaMarcus Aldridge, a calm man, looked and sounded genuinely upset, as if the absurd effort it took to put up 25 and 13 no longer mattered because of the game's final moments.  Steve Blake was glaring at the crowd of cameras that were spilling over into the side of his locker, muttering at a chair that was in his way.

The little things in life that don't bother you on a good day or on a normal day, drive you absolutely crazy on a night like tonight.

How did it come to this scene?  It was a worst-case scenario for closing out a basketball game. The Blazers were leading 108 to 100 after LaMarcus nailed one of many jumpers with 2:20 left.  Then our offense turned Chernobyl and our defense turned into Tom Cruise on Oprah's Couch.  When the dust settled, Jameer Nelson, Rashard Lewis, and Hedo Turkoglu, even with Trout all up in his mug, had nailed 3 pointers to put the Magic over the top, against all odds, 109 to 108.  As Hedo's shot went through the net, the Rose Garden went dead silent.  The crowd filed out, silently, quickly, avoiding eye contact.  It was awful.

Was this a game that the Blazers had in control and shouldn't have lost?  Yes, of course.  At the end it was.  But for long stretches of the game, starting 16 seconds into the first quarter when Greg Oden picked up his first foul on Dwight Howard, it felt like a game we were destined to lose.  Howard started off very tough inside and his teammates were hitting from everywhere.  The Magic finished 14 of 27 from deep on the night.

We hung in the game thanks to stellar bench play. Przybilla went for 11 and 11, besting Superman on the boards and nearly matching his point total. Sergio and Rudy did their Spanish thing.  Travis reached double figures.  We even pulled away in the second half, briefly, thanks to Brandon's season high 30 points (plus 9 and 5) and LaMarcus's 12 of 17 performance, which showed why many, myself included, thought he might be an All Star during training camp.  It seemed like he couldn't miss.

In the end, it wasn't meant to be.  The final act was a desperation 3/4 court heave from Brandon which never had a chance.  As the entire Magic team spilled onto the Rose Garden floor, dancing in a big group in one corner, a distraught Roy was consoled by General Manager Kevin Pritchard as he walked off in the opposite corner.  After the game, I asked Brandon what KP said to him.  Brandon just looked off into the middle distance of an emptying locker room and said with blank eyes, "I don't even know."

It was that kind of night.

All things considered, Nate handled tonight's loss much better than I expected.  He didn't seem overly disappointed or shocked.  In that kind of postgame atmosphere, the tension can be high.  Nate was very much in control of his emotions, very straightforward in his delivery, and, I suspect, already planning what he was going to go over with the team during practice tomorrow.  Here's what he had to say...

Nate on the result: "We got to execute.  We had that game under control. We've seen start to double team Brandon and get the ball out of his hands.  We had the play set to get a guy to the middle and attack that.  If you get a guy to the middle, it's 4 on 3 back there. And we didn't execute. We didn't get a shot off that last possession.  Then, defensively, you need to get a stop."

Nate on whether the team got too comfortable with an 8 point lead: "I don't think we got too comfortable, we didn't execute.  Any time there's a double team you get a man in the middle. We called our timeouts to set that up. We've seen that from teams, teams are saying, they're defending Brandon, they are sending 2 at the end of games and forcing someone else to make the play. Ok, we'll take that, spread, space the floor, we have our shooters on the floor, we attack that, and we didn't get a shot off, that's a big possession."

Nate when asked whose fault it was: "We just didn't get to the middle."

Nate on Blake calling a timeout because he couldn't get the ball in: "He knew that he had a timeout. I thought we have to come to the ball and get ourselves open. I thought that was a bad mark, I thought Brandon dribbled the ball down further. We used the timeout, it's all about executing."

Nate on the Magic's offense: "They were hot. We got sucked in a few times on penetration. Lost the guys on the perimeter and they made some 3s. We knew they were a team that plays inside to Howard, or penetration that forces the collapse, and then they shoot a ton of 3s."

More Nate on the Result: "You have that game. We had that game under control. We just gotta execute. When we got possession of the ball, our offense was working, they go to a trap at halfcourt, and we're going to have an advantage.  We need to get an attempt at the basket. Then defensively, get a stop."

Nate on whether inexperience contributed to the meltdown: "We've been in the situation before. We just didn't execute the play. I wouldn't say it was inexperience, we've just got to execute."

Nate on Greg versus Superman: "Howard does a good job of defending the basket and blocking shots.  Greg got in foul trouble early with Howard.  Our small lineup with LaMarcus at the five, worked during our last game, and in the fourth quarter we went to that, and we got back in the game and was able to take a lead."

Nate on how Greg did keeping Dwight away from the hoop: "I need to see the tape. As far as I remember, Howard had him deep a few times, when he's down there, he's going to score or go to the free throw line. We didn't want to give away any layups. We wanted to put him onthe free throw line. Get him off the block first. But he had pretty deep post position."

Nate on Sergio's Game: "I thought Sergio did a good job. Coming in and creating some offense for us.  Making things happen and getting us back into the game." 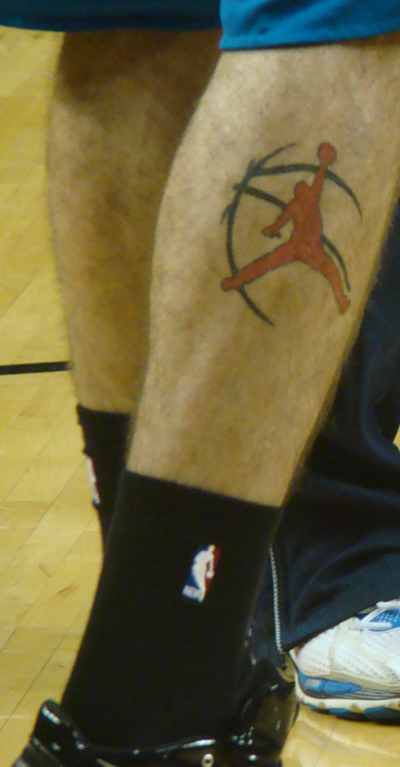 Orlando Magic player Marcin Gortat has a tattoo of the Jumpman Logo with a basketball on his leg.  You want to argue whether Kobe is better than Jordan?  Call me in 10 years when a random Polish baller has a KB24 tattoo on his leg.  Not happening. 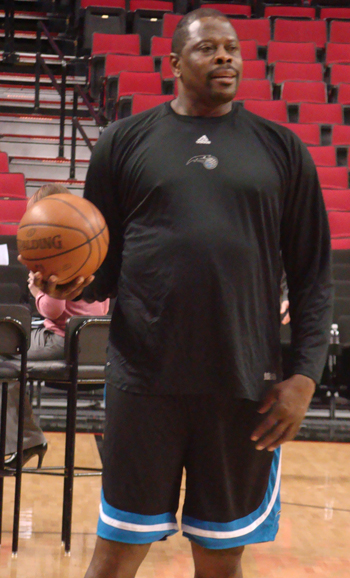 Patrick Ewing is kind of large, looking gooey in his black warmup shirt.  He was wearing a sweet fedora when he came in off the team bus.