Share All sharing options for: Media Row Report -- The 3-0 Homestand is Complete

During the preseason there was some talk that the Blazers would be "the 2008 Hornets" -- coming from the depths of the Western Conference to make a surprise run through the playoffs.  It's still too early to make that case definitively but tonight we straight jacked the Hornets' slogan ("Passion, Purpose, Pride"), displaying all 3 P's as we ran them off the Rose Garden court 101 to 86.

We saw the passion in Batum's coast to coast steal for a layup (he does this at least once every game now, doesn't he?).  We saw it with Rudy's gesticulations after his made buckets.  We saw it on the glass all night -- big offensive boards from Aldridge and Oden, and tip-in layups from a host of players.

This was a purposeful win: the tone set from jump by Nate's distribution of minutes.  Everyone got minutes -- 8 players played 20+, 10 players played 10+.  Everyone swung the ball to the open man (25 assists on 37 field goals).  Everyone attacked the rim -- even Rudy!  Even Channing! -- as the team shot 25 free throws to New Orleans' 10.

And, as always this season in front of the home crowd, the Blazers played with pride, exemplified best by Brandon standing up to the fugazi David West with 2:50 left in the fourth quarter.  "What's that about?" Brandon chirped at West after a harder-than-necessary foul.  West shot back with, "What'd you say?"  Brandon didn't flinch, standing chin to chin with the popcorn muscled West, repeating himself, "What's... That... About?"  The scene was defused by a double technical and a timeout; shortly thereafter, Byron Scott waved the white flag and pulled his starters.  His team had been unable to out-execute the Blazers throughout the second half.  Now the Hornets had failed to intimidate the home team.  It was over.

Brandon finished  with 25 points, 10 dimes and 6 boards. Once again, against elite competition, he showed himself to be the best player on the floor. Under B Roy's guidance, it's looking more and more like those 3 P's will translate to the one P that matters -- playoffs.

Nate on the double digit win: "We beat a good team.  New Orleans is a good team. They were coming off a back to back and they had a tough game in Denver but that's a real good team. That was a challenge for us tonight. In the first half we did some good things but we did better in the second half. The adjustments that we made.  I thought our bench responded.  We felt their bench outplayed our bench in the first half. In the second half I thought our bench got aggressive on both ends of the floor."

Nate on halftime adjustments: "I thought we got some stops. We went to a different defense on Chris. We dodged some bullets. They had a couple open looks that they didn't knock down. Our first game, and even the first half of this game, they don't take a lot of threes, but it seemed like the 3s that they do take are daggers.  They missed a few of those shots. We were able to put the ball in the basket, get the crowd into the game, and our guys kind of fed off of that."

Nate on Brandon's motivation tonight: "We know that tonight's going to be a tough matchup. New Orleans is a very good team. They've had success this season against us.  Posey had a big game last time we played and it could have been that.  The fact that we get this game and he went up against some tough defenders and that he got hit at the end.  I think that fired him up a little bit. It was a big win for us."

Nate on playing Paul: "What we try to do is wall him, commit 3 guys to the pick and roll defense.  The second half we adjusted and ran "push up and get through" which is a 2 on 2 defense, it's basically the center and the guard working together so we can stay at home on the shooters."

Nate on LaMarcus: "Part of the growth and maturing is learning how to respond or recover from maybe a night of bad shooting or a couple games where you don't have your rhythym.  How to get your rhythym back. That's part of what he's learning to do.  When I have a bad half or bad game, or two bad games, mentally getting myself back confident that you can do it the next night. Tonight he had his shot going. Now how do you keep that going."

Nate on where the team is at right now: "I am happy with it.  We had some tough losses. We've been able to for the month defend home court and play well here which I think is very important.  I felt like that tough schedule we were going to be better.  You don't necessarily know what your record would be but I felt like we would be better because we could see what we needed to do and what we needed to improve on.  We have been able to improve and we have to continue to do that."

Nate on whether he's happy at 11-6: "I'm happy with the record.  Maybe a game or two we possibly could have had.  I'm happy with where we are at."

Nate on whether we've exceeded expectations: "I'm happy with where we are.  Right now 11-6.  We are playing pretty good basketball. There's room for improvement.  We've got Martell coming back here sometime soon.  We've got to keep getting better."

Nate on defending Chris Paul: "We wanted to keep pressure on him. I thought Blake tried to do that then Sergio came in and just stayed in front of him. We shadowed him and tried to make someone else handle the ball, to make someone else work to come get it. To make Chris work for everything that he got. He missed some shots in the second half.  Keeping our shoulders square on him and keeping him in front of us I thought our guards did a good job."

Nate on whether accepting failure is a part of being a clutch player: "No question. If you're afraid to take the shot you'll never get to that point. He's been there. I think for the most part he's had more success late than failure.  I think he's at that point now and we believe in him. We're going to go through him.  We're going to allow him to make plays for us."

Nate on Batum: "He's done some good stuff. He's knocking down shots. Defensively, we felt like he's always been pretty solid. He's doing a good job, a really nice job.  Martell will be back and we'll see where we are.  We are going to play the guys, if it's working, we'll stick with it.  All of our guys understand that." 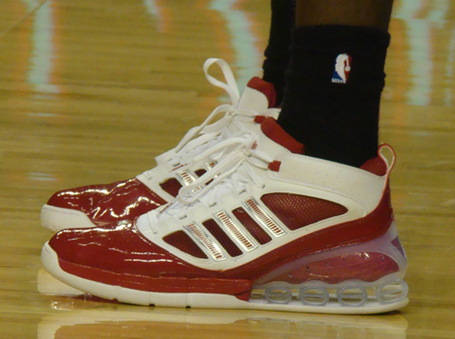