During my season preview I stated that our number one team strength was our depth. But depth can be tricky to quantify... in a star-driven league it can be hard to pinpoint how many wins are the product of the bench guys.  Tonight, for example, we ran out to a huge lead. One could argue that the game was over before our bench even entered the game; after all, it was 18 to 4 with 5:52 left to go in the first quarter.  Poor Eric Spoelstra had already used like 17 timeouts at that point.

So it's difficult to argue flat out that "depth won this game" for us.  But we can say this for certain: our depth killed the Heat's hopes of making this a real, legitimate game.  Pick a violent metaphor: that's what our bench did to their bench.  In fact, I think it's fair to say that not a single member of the Heat's bench (Anthony, Quinn, Cook, Blount, Banks, and Livingston) could crack our active roster.  When our 10th (11th? 12?) guy is better than your 6th guy, it's going to make life difficult.  It's going to turn the day before Thanksgiving into Bloody Wednesday.

There were so many things to like about this game.  LaMarcus came back with a vengeance with 16 and 7 in 25 minutes.  He was putting in some serious work pregame... 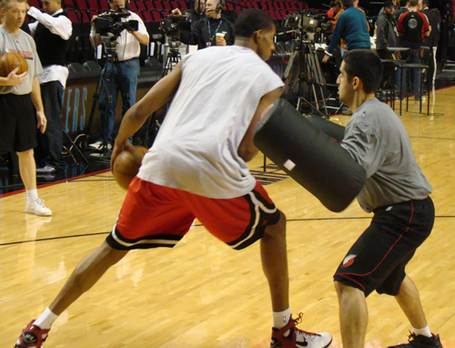 Battling with Coach Caleb And The Arm Pads paid dividends early and often.  LMA hit jumpers, he hit the glass, he did what we wanted.  Mike Beasley, welcome to the league.

Do not overlook a nice night from Greg.  There's still no doubt we play better with Joel in the game.  But Greg did a lot of nice things.  4 of 6 from the field (showing some of the offensive polish that I saw during Tuesday's practice) and 10 boards (4 offensive).  This game was tailor-made for him to do work -- and he did.

By the way, I haven't even mentioned yet that Nic Batum just had the game of his life (15 points on 6 of 9, 3 of 4 from distance, 6 boards, locking D Wade down to 12 points in 30 minutes).  Did the entirety of Mike Born's scouting report come to fruition or what?  The best sequence: early in the game, Nic stole the ball off D Wade by smartly playing the passing lane, hustled to retrieve the loose ball, quickly turned it over to Brandon, then hauled down court to get the pass back for a difficult gliding layup that he made look easy.  You know Martell was watching all of that.  So was Nate.  Be sure to read Nate's lengthy comments on Nic tonight below.

Nate on nailbiters vs. blowouts: "It was the other extreme [from a nailbiter]. I thought the guys did a great job tonight. I thought we played beautiful basketball. We had a few minutes where we turned the ball over. But on both ends of the floor, the defense, to try to keep Wade out of the paint, our bigs, our guards, everybody was in sync tonight, offensively we had the ball movement, i just really respected the way they played tonight."

Nate on Batum: "Defensively he knew he had the assignment on Wade and he basically has been the guy we put on the best wing and allow him to use his energy. He's knocking down his shots. He's not taking a lot of shots but he's shooting a high percentage. I think he was four for four in the first half. He really gave us some momentum. He's done a nice job, a solid job."

Nate on whether he had doubts about Batum on Wade: "No. He's long, his defense is ahead of his offensive game. He has good feet. He does a good job. He's made adjustments as far as guarding guys like Wade. A lot of times they draw him into quick fouls. He's learned to give certain guys cushions and just keep them in front and make them work to get the ball."

More Nate on Batum (asked at the end of the session and bumped up here so you can read all the Nic stuff together): "He did a nice job. If you're getting scoring from Nic then I think that's a bonus. Because he's doing a job of playing off of the guys in the lineup.  He had wide open looks and there have been games where teams have double-teamed and left him open.  He's been knocking those shots down. He's shooting a good percentage from the 3 and tonight early it fell for him.  Defensively he's solid.  He's played good d since playing him in that lineup. And that's the reason for having him there. We can pretty much put him on a Wade and put Brandon on the guy who is spreading.  Take advantage of Nic's ability to defend.  You can contain Wade but you can't stop him. But I thought we did a good job as a team of keeping him out of the paint and off of the free throw line. I think offensively he's still trying to learn the offensive game, spreading the floor, playing off of the guys out there. Defensively, guarding the ball, getting over screens, he's long, he's quick on his feet, he can block shots, he can go to the boards and rebound, that part of his game is ahead of most rookies that come into this league."

Nate on coming out strong: "I thought we were good tonight. One of the things we talked about was we know how it feels to travel across the country and play that first game. It's a tough game to play and we didn't want to give them any confidence really. The start was really important tonight. Not to allow them to get a rhythym or any type of confidence. Just try to play solid for 48 minutes."

Nate on the overall performance: "I really respect the way we played tonight. I thought we came out and it was good basketball. What they did out on the floor was fun to watch them play that way. Unselfish basketball, defensively Wade has really been able to put up numbers against us. And tonight we were able to keep him out of the paint and really play our schemes. Offensively we got movement, our spacing was good, we dominated the boards, all the things we've talked about doing this game I thought we executed."

Nate on whether this game was a sign they can play well without Brandon: "Again, it's one of those nights. I wouldn't go too far. It was a good night. We didn't really need Brandon to have a big night. I thought he played off of our guys and some other guys had some things going.  He allowed that. I think he's been doing a good job of picking his moment to be aggressive when he sees that things are a little stagnant.  When the game is on the line, he asks for the ball. It was a night where other guys had it going and it was unselfish play."

Nate on Sergio: "We're getting into that up tempo style, the defense that they run, on the pick and rolls they hard show, we do a nice job against that.  Guys were making shots tonight. Sergio has been doing a nice job of creating opportunies and we haven't shot the ball well in some of those oppportunies. Tonight Frye had his j going, LaMarcus had his shot going, Rudy, all of our guys had their shots going. When the shots are falling like that, the assists can add up."

Nate on Lamarcus: "He was making shots. He had very similar shots that didn't fall for him on Monday, tonight he made those shots. His confidence, he was able to keep that rhythym. I thought he played pretty much the same game [as Monday]. He got something in the paint, he got a dunk in early, and then made his jump shot. A lot of times, especially with young guys, when they see the ball go in the basket, they feel good about themselves.  Tonight that shot fell for him.  And he played a nice game."

Nate on coming back after Monday's game: "We talked about going out and improving. I didn't like what we did in our last game. We won the game but we felt like we could play better. I thought tonight they responded and came out to play better. As we get into the season, everyone else is going to get better, and we need to also." 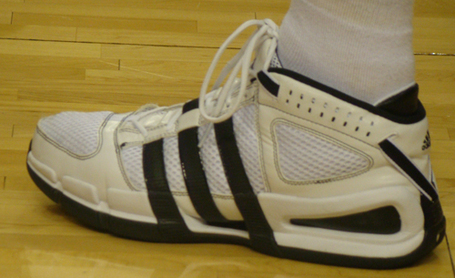 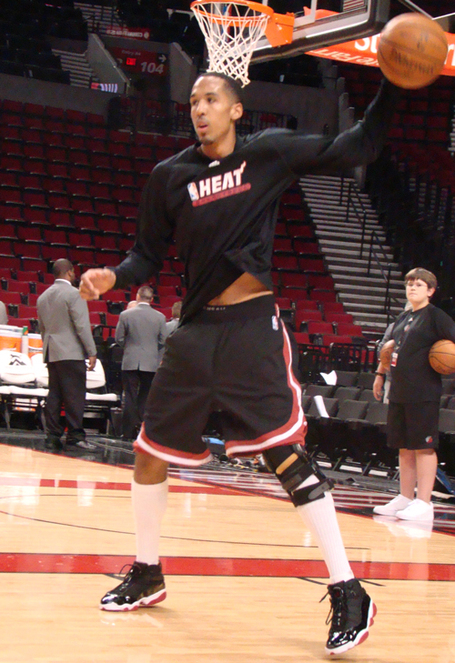 It physically hurt me just to stand that close to Shaun's knee.  Dope, dope shoes though.