Whole lot of commotion over at the practice facility today; everyone and his grandmother was there today.  Practice opened at about noon with word that much of the morning was spent in a film session.  I'm sure there was a looooot of film to look at from last night.

Right as we entered, the team broke into free throws and post-practice work (wings take jumpers, big guys work on drop steps, etc.) and again we watched Greg, under the guidance of Coach Dean, go hard through an array of post moves -- catches, turns, drop steps, jump hooks, the whole gamut.  He looked confident and focused... and pretty smooth.  Of course, no one was guarding him.  But the talent is there.  You can touch it.  This leads one to the conclusion that Greg's inability to consistently translate those skills to the court is due to one of two things: 1) it's mental or 2) he is just that unfamiliar with NBA game speed.  I wish we had seen some full court scrimmage so I could try to get a read on point 2.  But, alas, that's not how it works.

As to the question about whether it's mental with Greg, I turned to Chis Bowles, Blazers Director of Player Programs, who not only works closely with the players on a regular basis but is adept at reading people and situations thanks to his background in communications.  After last night, and weeks of talk about Greg, I put the question pretty simply to Chris:  Are you worried about Greg?  Should Blazers fans be worried about Greg?

Chris is a straight talker.  You might remember that from the 72,000 word interview from last Spring.  He doesn't mince words.  He has no time for beating around bushes.  His response to my question:  a flat "no."  No's do not get much flatter.  Chris pointed at the game against Golden State as evidence that Greg has already realized potential on the NBA floor and that his struggles are, if not expected, part of the growth process.

I asked a few questions about Greg's body language and how he seems to zone out a bit.  Chris said he didn't see it last night but acknowledged that Greg is very hard on himself. He said that Greg hasn't sought him out for any help and that their conversations are the same as they've always been.

Chris did acknowledge that Greg does hear the criticism -- whether it's from white sportswriters or African-American rappers.  I asked him if Greg might take to heart criticism from someone like Lil Wayne more than he would criticism from someone like me.  Chris flatly rejected the question's premise based on the unimportance of Lil Wayne.  He then let on that some members of the team think that he's a Lil Wayne hater but he just doesn't see how Weezy stacks up to NWA, Public Enemy and the like.

Music criticism aside, Chris's focus was on the future: where will Greg be in ten years?  Where will his critics be?  Those were the important questions to Chris.  I can say this: I didn't detect a shred of doubt in Chris about where Greg will be in 10 years -- on top of the game.

After the extra post work, there was also this from Greg, a posed picture with a young Iraqi child in town receiving health treatment.  I think you'll agree that it's good to see Greg smiling. 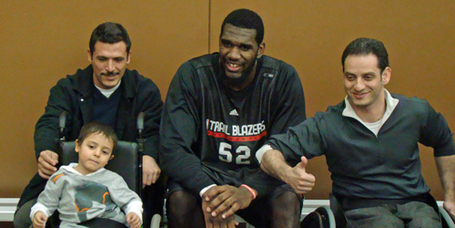 Last but not least I give you this picture of a Spanish journalist "interviewing" Sergio and Rudy. 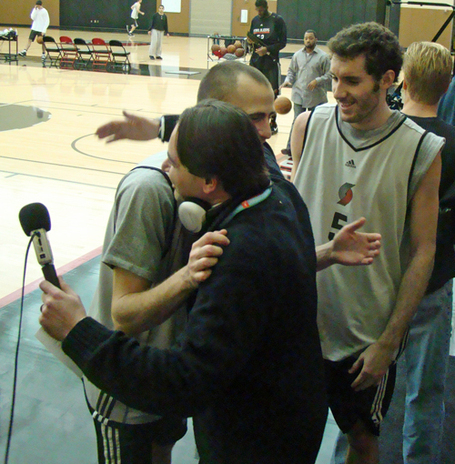 Before practice, the guy was pacing around the waiting room nervously.  Then, upon first seeing Rudy he let out an extended, audible giggle.  To my knowledge, no trade demands were made during the course of this "interview."

Also, enjoy the back of the well-coiffed Ric Bucher's head.