Just to be clear: LaMarcus Aldridge is fully aware that his jumper is completely off right now.  He knows it.  You know it. He knows that you know it.  No, he doesn't know what's up.  Yes, he's working to correct it.  Indeed, he was out there 90 minutes before the game shooting jumpers, trying to get his stroke back.  By my count, during one stretch, he went 2 for 20, unguarded from 18 feet out, with the ball rotating haphazardly, too much to the left on one attempt, too much to the right on the next.  He then went out and went 3 for 14 during the game, hitting nothing but a few layups and a jump hook.  He hit the side of the backboard.  He hit the front of the backboard.  He hit everything, pretty much, but net.

So there's that to worry about.  There's also this: Greg started his first home game but barely played in the fourth quarter as he struggled his way to 3 points and 6 boards in 19 minutes.  I snapped this picture with less than 2 minutes to go and with the Blazers in a dogfight down the stretch. 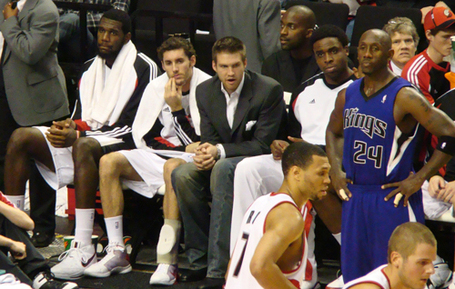 I'll put it this way: I didn't just catch Greg in between smiles.  He didn't look like he wanted to be there.  He didn't really look like he was paying attention.  Think I'm putting it too strongly?  Watch his reaction to his very first starting lineup introduction.  It kind of makes me cringe.  As far as I know, he didn't take questions after the game (I didn't see him in the locker room).  These are tough times. He is hard on himself.  Wish the big fella well.

The nice thing about having a big three though is that even when one can't hit a shot and another just needs a break from life, there's always Brandon to put up 28, 4 and 3 and carry the team with two clutch shots down the stretch.  It wasn't Brandon's best game from start to finish but his 28 points were a season high.  His lefty layups in the lane are getting to be routine; we should never take them for granted.  Too dang pretty.

The Blazers only won this game because their 18 offensive rebounds (12 more than the Kings) led to 84 field goal attempts (13 more than the Kings) and because John Salmons could only draw back iron on his last second runner.  In fairness to Salmons, who had a heck of a game (20 points in 41 minutes), Travis Outlaw was going zergling all over him in the lane.  Say what you want about Travis's inconsistent defense.  He can bother shooters when he wants to.

What's the takeaway tonight?  Our shiny 9-6 record shouldn't have you too high: we've got some serious consistency and mental issues to work through if we want to beat the really good teams. Remember: the Kings played without Martin and Garcia.  It's hard to feel too good (or good at all) about this one.

On that note, Nate was not feeling too hot after the game.  He was on edge, talking briskly through questions, rushing out of the room after just a few minutes.  Nate is still not the type of coach to be outright angry after a win (after all, it's a win, he'll take it) but this was just about as negative as I've seen him after a win.  Here's what he had to say...

Nate on what was missing: "The scrappiness. I think we've got to work hard. In this game it's about bringing it every single night. On both ends of the floor and there's no reason why we can't get that.  No one should have to worry about saving themselves as far as minutes, we are playing 10 guys.  We should be able to get after guys.  I didn't think that we were the aggressors in this game. We had to make some plays down the stretch to pull this out.  We've had a couple of those this year but we won't continue to win games playing that way. We are much better than that.  We gotta show it."

Nate on Greg's play: "Well, I want him to be more aggressive. Defensively, making the calls. And the pick and roll sets.  Dominating.  I think both he and LaMarcus can dominate that paint, on the boards.  If we're dropping it, being more aggressive. Tonight, Joel stepped up once again and I think the good thing about our team is, again, you don't have to save yourself.  Go out and leave it on the floor.  We'll have another group come in and it's about the team playing well."

Nate on going with Joel instead of Greg down the stretch: "Joel was doing some good things defensively.  Offensively he was underneath the basket and able to put the ball in the hoop. Defensively he really did a nice job giving us a lift."

Nate on getting used to playing with Greg: "We gotta play basketball. We can't forcefeed the post.  If it's there, we take it.  If not, then you gotta shoot the ball.  If they are committing two to defending him in the paint, somebody else is open and you've got to knock down some shots.  We're not going to force it to anyone.  If you do get it, you gotta make good decisions with the ball. It's not playing with him and playing off of him, once Greg, Brandon, LA and Travis, all the guys who get the ball, once they receive the ball, then everybody has to play off of each other. But we're not going to force the ball to players if the defense is taking that away, we have counters that we can go to."

Nate on the team's last offensive possession (Outlaw missed shot):  "I think they had about seven seconds difference [between the shot clock and game clock]. We had to get ashot up. We knew they would double team Brandon. We wanted to get Travis in the middle of the floor, anyway.  So when they denied Brandon, Travis had Mikki Moore. You gotta look at the clock and know the clock, spread the floor, we'll take that matchup.  We'll take that matchup and we want to get to the basket.  We're in the penalty.  He missed the shot.  Whether you play it to the last second or not, they still going to have 5 or 6 seconds on the clock." 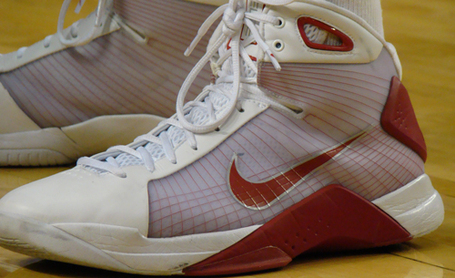 Kevin Martin enjoys the color black. And is good at prancing.