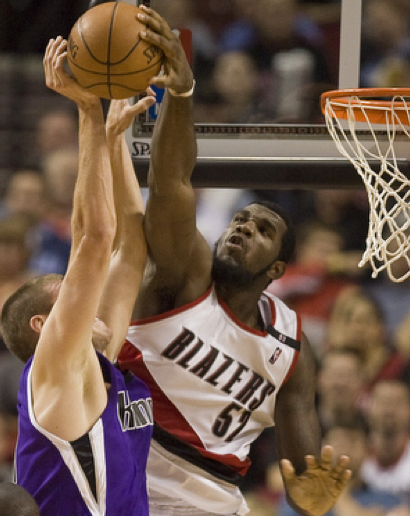 Aside from allowing that girl that wasn't wearing pants to grind on him, is there a more indelible image (here's video) of Greg Oden than when he stuffed the bejesus out of Spencer Hawes in the preseason?

Great players, Jordan caliber, form their own paths in the NBA. Other players, even good players (Ehlo, Uncle Cliffy, Bryon Russell, etc.), get their destinies imposed upon them. That can either really suck or be fun to watch, depending upon which side you're on.

I have an inkling that that might be happening here with Oden and Hawes. Spencer just fits (embraces) so many of the stereotypes of an ideal Oden punching bag.

Let's talk out the fate of Spencer Hawes in the comments.

UPDATE: Tom Ziller over at SacTown Royalty responded with a poll and picture of his own. [Warning: if you're still feeling touchy about Greg Oden criticism, you might want to avoid this one. Yes, we've come to the point where a disclaimer gets attached to anything Greg-related that is not effusive praise. And this is definitely not effusive praise.]