It didn't feel like the Blazers would lose this one all night. Until there was about 3 seconds left in the fourth quarter, Travis Outlaw had just missed a shot attempt and the ball was pushed up the floor frantically with Michael Finley lining up a baseline jumper as time was about to expire.  Up until that point, though, there had been a sense of certainty in the Rose Garden, initiated by a rabid fan base and developed by confident, smooth play from the Blazers. It almost went out the window.

It was a ridiculous night. Earth, Wind and Fire performed pregame (although Captain Planet was nowhere to be found), Brandon and LaMarcus performed middlegame and Michael Finley thankfully didn't perform in the endgame (missed jumper); the Blazers escaped with a 100 to 99 victory at home.

Led by Bayless and Batum, the team came charging out of the locker room to LaMarcus' song selection, Swagga Like Us by TI, which apparently is just a looped sample of a clip from an MIA song from like a year ago.  Derivative music for the loss.  On a better note, the team had edited together a new pregame video, with tons of footage from the home romp over Sacramento in the preseason, Rudy's lefty layup, Rudy's through the leg pass, Oden dunking. It was inspirational. I was inspired.

Larry Miller had a courtside dap for Brandon during the layup line and then took the court to say, "All this red looks great in here tonight."  He might have just been referring to his own tie.  The Redout didn't seem to be an overwhelming success although there were some fans who got the memo. 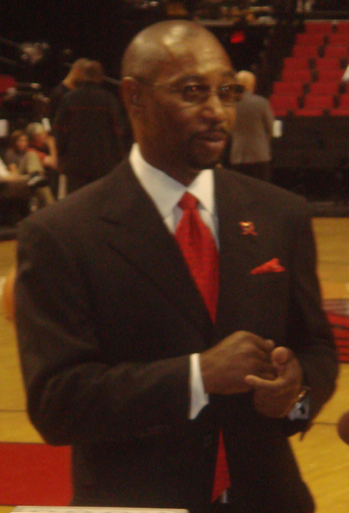 RED OUT!!!!!!! Sort of. Larry Miller was leading by example.

Miller then had the line of the night, "I want to introduce the elements of the universe: Earth, Wind and Fire" and the team made a big production of having the players enter the court from various 100 level entrances, high-fiving fans as they ran down the stairs, as a band that was last relevant about 30 years ago played air-guitar or something and cheerleaders clapped crazily.  I don't think there was any MDMA in my Red Bull but at that moment I couldn't have been sure.  Nic Batum was flying down the stairs; I was really glad that he didn't wipeout.  Meanwhile, Tim Duncan was not impresssed, practicing phantom jump hooks as this production was going on around him in every direction. Focus.  It's important.

After player introductions (Joel got a lot of cheers, Brandon brought the house down), LaMarcus came out to say, "Thanks for your support. I'm looking forward to a great season."  Good for you, LMA. We are too.  Excellent speech.

As for the game itself, the biggest takeaway for me was how the Spurs handled Brandon defensively down the stretch.  After B Roy was killing them time and again on jumpers (10 for 18 overall) from his favorite spots on the court -- just left and just right of the free throw line -- Coach Pop elected to run a second defender at Brandon, forcing the ball out of his hands.  I talked to Brandon about this after the game and he noted that it wasn't the first time that he's seen this (a few teams played Brandon like that last year), but that "for the Spurs to do it says a lot."  He seems to expect to see a second defender running at him a lot in the future.  And with good reason: the book is out on Brandon.  You can't let him go one and one down the stretch, he's just too consistently good.

Brandon noted that the Spurs sent the double team from different players -- Joel's man on one late possession -- which made reading the Spurs' defense more difficult than it generally would be against most teams.  The respect Brandon has for the Spurs scheme was clear, "You don't know where the double is coming from so I had to take it as it comes."  Forcing decisions on the fly and under pressure is one hallmark of a solid defensive team.  Asked if he was looking for LaMarcus first in those situations, Brandon said he simply didn't have that luxury given where the double teams were coming from.  This led to the ball ending up in Travis's hands on the team's final offensive possession.  Travis, as mentioned above, was unable to convert, leading to a breakout that nearly cost the Blazers this game.

LaMarcus, for his part, seemed very happy with his performance: 23 points and 5 rebounds (not quite matching Duncan's 27 and 10) but doing enough, including knocking down a big 3 and a bigger jumper from the top of the key, to get the W.  I asked LaMarcus about going against Duncan and Kurt Thomas.  He said his approach was similar against both players because they are both strong and very long: be aggressive, take it right at them and look for high percentage shots.  Aldridge broke out the full arsenal of fadeaways, hooks and jumpers and finished 10 for 22.  He was the focal point of many, many possessions as the team looked to get him going throughout the game.  This was exactly what many of us had hoped for -- it was pleasant to see how it played out.

If one player stole the show tonight, however,  it was none other than Blazers Edge favorite Nicolas Batum.  Go ahead and induct him into the Hall of Fame right now. Book it. 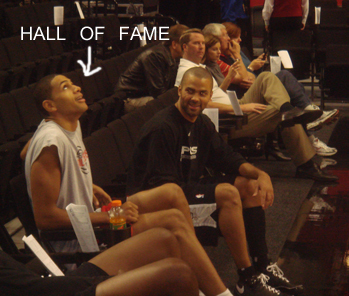 Batum was literally all over the place on offense and defense.  He smoothly came off picks, cutting hard through the lane with his hands up.  He knocked down open shots (5 of 9 overall), He had two blocks and a steal on defense and, in one memorable stretch, was matched up on defense with Tony Parker.  One might argue he did the best job of any Blazer of guarding Parker, who was having his way with both Steve Blake and Sergio Rodriguez.  Shades of Scottie Pippen from Batum on the defensive end.

Speaking of Sergio, it is more apparent with each game why he is so frustrated with his role.  He played just 9 minutes and for each and every one of those 9 minutes Nate was hovering right over his shoulder, waiting for a turnover (Sergio only had 1), a missed shot (Sergio was 1 for 3) or a poor defensive play (he got his ankles broken hard by Parker on one drive).  Shortly after one of these transgressions, invariably, there would be the reflexive hook from Coach McMillan and Sergio would head back to the bench.  There is no trust there whatsoever.

In fairness to Sergio, although he was dominated by Tony Parker (24 and 11), Steve Blake was dominated even worse.  I thought Steve looked worse tonight, particularly on the defensive end, than I can remember.  He was beaten so easily to the basket on numerous occasions for gimme layups.   Parker -- extremely quick, great body control, solid shooting (he can make uncontested layups) -- is one of the worst matchups in the NBA for Blake.  It showed tonight. Blake was, it should be noted, an efficient but forgettable 3 of 5 on the offensive end.

This is getting long, so I'll throw this to some Random Game Notes bullet format: 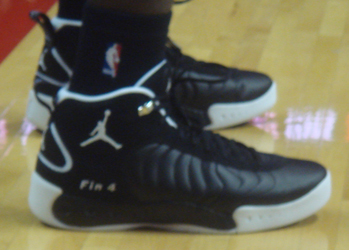 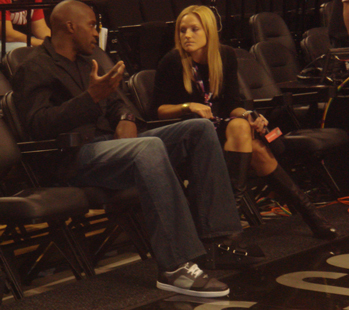 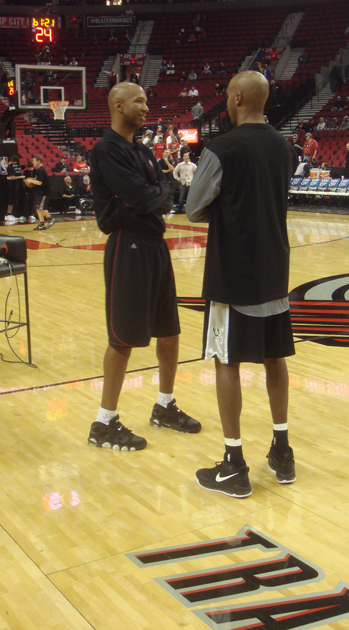 The NBA: Where razorblades happen.

Nate on the importance of the game: "Any time you beat one of the elite teams, especially San Antonio, we haven't beaten San Antonio since I've been here. It should be a confidence booster for us.  They made shot after shot and our guys stayed calm.  Our guys had to go down and score and make plays, and get stops, and we made just enough stops to win the game."

Nate on what his halftime message was: "We've been here before but they seem to find a way to turn it up in the second half. What we wanted to do was finish the game. We needed to finish the game with a solid third quarter and a solid fourth quarter, and we did."

Nate on Nic the Hall of Famer: "Defensively was one area we felt he was doing a good job during training camp.  He got back to rebounding tonight, he knocked down his shots, he really gave us a lift. He had a block on Tim early. That really gave the team confidence and got the crowd into the game. A lot of energy and a lot of scrappy play."

Nate on the last possession: "We were giving it to Brandon and allowing Brandon to make a decision to go, or call up a pick and roll, it was his call. They went to a double team, they went to trapping Brandon off of Joel, and the next move was for our guys to go to the basket, be aggressive and attack the basket."

Nate on what he was thinking when Travis missed the final shot: "Well first I was thinking, Do they have a timeout? They had one but they didn't use it. Then, get back and play defense! [Finley] had a pretty good look. We were challenging shots all night long tonight.  We had a hand up on that one. It was just off a little bit. They had a shot at it.  When you work like that you make breaks for yourself.  These guys responded with an unbelievable effort tonight."

Nate on the turnovers: "We did a great job of taking care of the ball. We outrebounded them.  Controlled the boards. When you only have 6 turnovers against a team like that, that's pretty good."