Before we get to a recap of today's practice, how filthy are Brandon's new shoes... 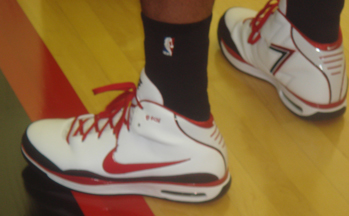 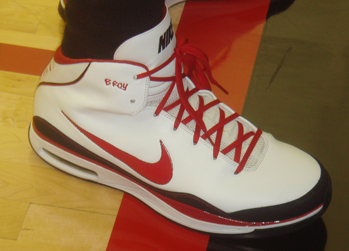 The stitching on the top says "B Roy" and the design on the inside is a 7, Brandon's jersey number.  Nike hit another one out of the park.  Remember that Sparq campaign? Whatever happened to that...

Anyway, there was no open practice portion today, just an interview portion.

Nate was very straightforward in his assessments today.  He said that with Greg out he will simply return to last year's rotation of Przybilla, Aldridge and Frye at the 4 and 5.  No big surprise.  He did state, "I don't know how many minutes Frye will spend at the five."  I suppose one can deduce that in addition to dealing with Tim Duncan tomorrow, LaMarcus will be seeing heavy, heavy minutes.

More Nate on Greg: "He's not lost months." There was a sense of relief in Coach that Greg will be back relatively shortly. Nate also said, "He's down. He's disappointed" and said he told Greg that, "There's nothing you can do about it."  If I ever get injured (carpal tunnel syndrome?) I hope Coach McMillan is the one assigned to letting me know that I'll be alright.

Coach also says that they will not rush Greg back, reiterating what KP said on Canzano's radio show yesterday.  The team will "give him time to get healthy."  He also said they would continue to emphasize Greg's cardio and conditioning, acknowledging that Greg is not in full game shape.

Coach said Travis will start at the 3 tomorrow night.

In the funniest moment today, someone brought up a comment Brandon made stating that the team hadn't really talked about Greg at all today.  The question to Coach was something like, "Are you making a point of not talking about Greg being out?"  Coach looked straight ahead and said, dead pan, "We know Greg's out."  He waited a beat for everyone to laugh and then finished, "Regardless of who is playing, we've got to play a certain way: hard."

Nate closed with some advice for the team as a whole, "Calm down. Have some fun. Go out and play hard."  When asked if it was difficult for him, a serious guy, to tell his players to have fun, Nate said "They just need to play basketball... This is what they do."

Martell seems very eager to get back on the court.  He's bouncing around like he's been stuck indoors all winter.  First, he was working out on one of those giant exercise balls.  Then he was pretending to shake and bake while shooting 3 pointers yelling at Brandon to look at him, then he was shooting from a chair again.  There was some discussion among writers about whether all that chair-shooting might throw off his form.  Who knows.

Right before I was about to leave, a crafty veteran journalist pulled my ear to a bit of a surprise: Greg Oden was hiding out in the training room and was about to do a short Q and A.  Oblivious me was all set to walk out and miss that entirely.

The question of the day was: how does Greg seem to be taking the most recent news?  Will he be relieved, sad, depressed, anxious? 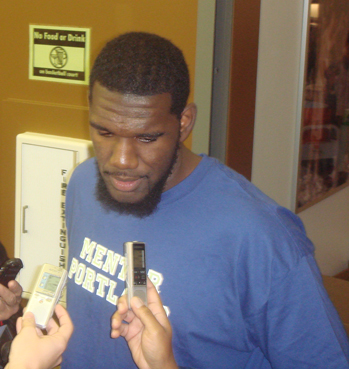 Greg didn't seem too upset.  Rather, he seemed very professional.  He didn't employ his super low voice and spoke directly and fairly candidly to each question.  Most memorably, he noted that "there are a lot of things" he'd rather be talking about right now than another injury.

As far as how he is moving around: "I can walk with a shoe but it's more comfortable to walk with the boot." 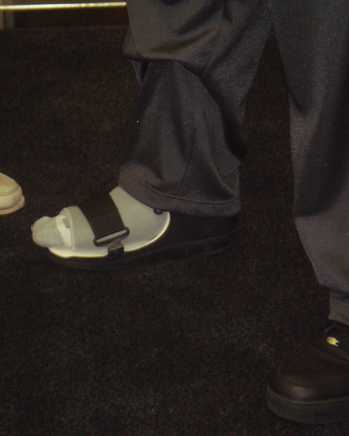 He said that after his injury during the Lakers game, his ankle was untaped so the training staff could have a look.  Greg said he "knew that was a bad idea" because it swelled up very quickly, making it impossible for him to return.  He definitely repeated his previous statements about how he was trying very, very hard to play through the injury on Tuesday night.  There is no question he wanted to be on the floor.

That's all for today.