Yesterday, at long last and with all praise due to the intrepid Ryan White, I fulfilled my dream of peaking behind the curtains of The Oregonian's Sports Department.

Before my tour of The O's Broadway Street office could begin, however, I found myself confronted by a 450 person lynchmob, which I initially mistook for a John McCain rally, but which was actually a group of Blazers fans circling the building, literally calling for Jason Quick's life.  "Kill him!" one shouted.  "Terrorist!"

I made it safely inside thanks to the hard work of the Oregonian's security staff (Don't think for a minute that all the front desk security guy does is sit and stare blankly at dumb questions about how to check in.  On the contrary, he is out there protecting people like me. Literally risking his life to protect others.)

I approached the front desk and was told by the male receptionist -- the manreptionist, if you will -- that I could take a seat in the waiting area.  The waiting room has a newspaper for you to read while waiting.  How convenient!   Guess which one it is?

I always panic a little bit when confronted by an ink-exuding piece of paper, no matter how good the content, so I instead just checked Oregonlive.com's top headlines on my phone and looked around for any signs of bulletproof glass.  I didn't see any.  I took that as a good sign, generally, although I immediately realized why John Canzano probably doesn't like coming into the office.  If I got some of the voicemails he plays on his radio show, I'd be living in an undisclosed bunker and you definitely would not find me in an office building that lacked bulletproof glass. Just sayin'.

The news room itself was breathtaking. All the signs of a normal office: refrigerator cleaning schedules, mission statements posted on the wall, extremely detailed fire evacuation plans.  I expected Dwight Schrute to catch a bat in a bag over my head at any moment.

But perhaps what was most impressive was the building's foundation.  Even under the weight of more than 200 GIANT WHITE COMPUTER MONITORS FROM LIKE TEN YEARS AGO, the building's floor did not sag in the slightest.  Say what you want about the newspaper business, but the employees are working in a building that far surpasses code. 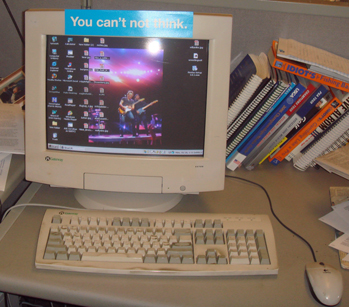 Speaking of the monitors, each was strangely tagged with a barcode and serial number, presumably so that when they are moonlighting as boat anchors and the anchor line snaps, River Patrol will know where to return them.

The newsroom was massive: rows and rows of workstations stretching perhaps a football field's length, and then repeated on multiple floors.  Two thoughts came to mind.  One: There are a lot of empty desks here.  Two: I devour the news on a daily basis and I have literally not heard of almost all of these people.  I tried to derive some greater meaning about the nature of a changing media landscape from these observations however I think the appropriate conclusions are: copy editors don't need to be in their desk at 2PM on a Monday, and I should probably start reading something besides the sports section and the front page headline.

In any case, Ryan did a superb job of parading me around the Sports Department, which was filled with genuinely nice people and an editor who seemed surprised that blogs were written by people and not robots.  Greetings from another planet, sir! Keep up the fine work.

I searched high and low for the sporstwriters' grinding axes but they must have hidden them behind the huge stacks of Wheaties boxes and media guides because I could not locate a single one.  One writer was even kind enough to explicitly point out that, "We do not hate the Ducks and Beavers."  I am more than happy to put that on the record for you.

As the tour continued, this website was recommended as a great way to kill the entire day. Oregonian Employees Covert Blog Reading On Company Time For The Win.  I also couldn't help but notice, posted on a tackboard, a "tribute" to a certain former Oregonian writer who doesn't like blogs. Beef: it's what's for dinner.

And that concluded the Sports Department tour.

Mysteriously, we then made our way past the 4 1/2 floor (Ryan "explained" this... but I don't think I got it or at least it didn't stick). 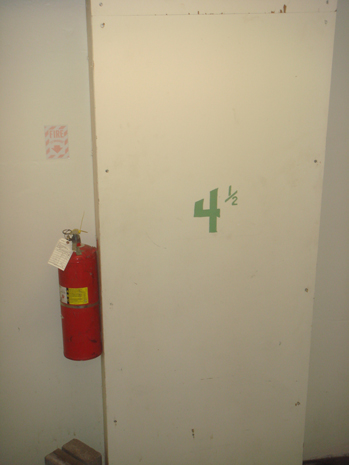 We then made our way upstairs to the Editorial section of the office.  Wow! Nice offices, guys!  Is that wood panelling? Could you maybe be a little bit more blatent about keeping all the best chairs and office suppies for yourselves?

The Oregonian had just endorsed Obama the day before so I was expecting a One Flew Over The Cuckoo's Nest madhouse dealing with the response.  Instead, it was mostly quiet, nothing but empty hallways and corridors covered in framed copies of various awards and recognitions that the paper has received.  "I'm not sure I've been down this hallway before," Ryan remarked at one point.  I'm not sure anyone has.  There definitely wasn't anyone else walking around at that moment.  Where the heck are we, anyway?  The point sunk in: this operation is much, much larger than I had anticipated it would be. The Oregonian is huge.

To reinforce this point, take a look down their staircase.  They call the internet a series of tubes, but look at this....

It's the neverending news spiral. It might just go on forever.

WIth that, the tour was pretty much over, but I got a big kick out of this display in front of one of the elevators.  Apparently as a morale booster (maybe?) they've juxtaposed a copy of the year's highest-selling paper next to a flat screen television that shows off the current Oregonlive.com front page in real time.

Except when the flat screen blue screens. Haha. 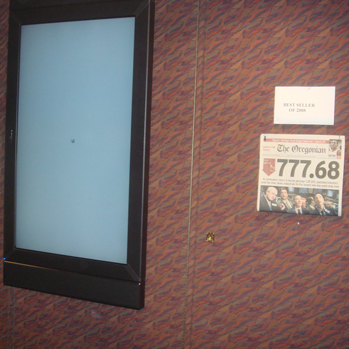 Ok, ok, in fairness it was working for the most part. 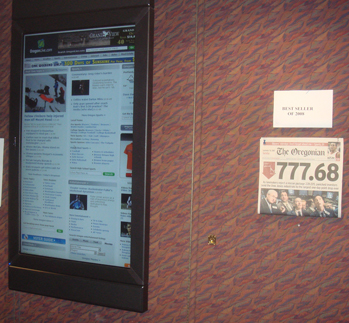 Who says newspapers are slow, unresponsive and technologically backwards?  Not me. The future is seeping in slowly, it seems.  Baby steps.

I entered the day excited to finally see HOW NEWS WAS MADE by the dominant media outlet in our city.

I left the day flat-out impressed by the funny, creative and kind people that make the news.  Just think what they could do if given modern technology to work with... I'm sure they think about it all the time.

A very special thanks to Ryan White for playing host. You can read Ryan's work, as always, at The Tailgate.