Share All sharing options for: Blazers Fans Hit the Jackpot

Tim P. -- your friends should call you dream maker.  Who's Tim P.?  Tim P. is a Blazers fan with a dream and an email account.  Currently residing in Georgia, Tim sent an email to the Blazers about six months ago.  Then he sent another.  And another. And another.

The subject of his emails: "Hey, guys, you have A LOT of hardcore fans that like to hang out on the internet."  The goal of his emails: Any chance these fans can get some face time?

Sure, it seems like a long shot and, certainly, others have tried.  But thanks to his emails and a receptive communications staff, Tim arranged for himself, and 19 of his closest buddies (with me tagging along as an embedded blogger), to get a tour through the Blazers practice facility and a meet and greet with Kevin Pritchard.  Jackpot.

The group met up in the Blazers media room and, almost immediately, more than one attendee made it clear that he doesn't live in his mother's basement. Kindred spirits.  Soon after, the group decided to take a team photograph in front of the curtains that Jason Quick infamously peeked through.  Quick, you're a legend.

When I was a kid I used to pour raw sugar on the sidewalk so that I could watch ants react.  This was like that.

I don't think I've ever written a negative word about Nate in almost a year of posting on here and I won't start now.  Nate was not scheduled to be a part of the tour.  And yet here he was, going out of his way to take time to answer a number of questions, gave the group detailed health updates on Blake and Oden, and, literally, had to be pulled away from the group by Blazers staffers.

The Practice Facility tour was quite thorough and highlighted by none other than a lengthy speech from Bobby Medina.  Medina regaled the fans with stories about Shawn Kemp's inability to stay fit, shocked some people when he said that he would only have 3 days off work in the next 9 months, and gave me a pleasant surprise when he said they literally have to kick Jerryd Bayless out of the gym sometimes. Then, on the spot, he created a workout program for a fan that asked for some help losing weight.  Seriously.  This happened.  The workout plan was detailed.  I lost five pounds just listening to it.  Medina is the man.

[Sidenote: As the tour continued, I asked another Blazers staff member about Young Bayless.  The response: look out for him in this year's dunk contest.  Oh, really.  Interesting. Then I asked if Blake's starting job is in jeopardy due to his injury?  "I think nature will run its course."  I'll let you decipher that one. Cryptic games are fun.] 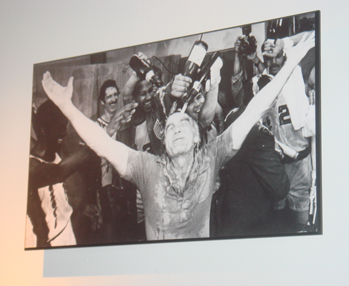 In case you were wondering what picture Nate McMillan looks at every day when he leaves his office, well, now you know.  That says volumes about Nate and the team.

The only time he "no comment'ed?"  Darius Miles, of course.  The only time he went with the trusty, "You'll have to ask Tom Penn on that one"?  When our very own Storyteller started asking calculus 3 cap space questions. 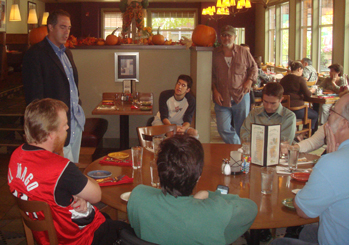 Did he break any news?  No, not really.  It wasn't about the words, it was about the dialogue. Look, we all feel the same way.  KP is larger than life and he can do no wrong.  Today, both he and Nate walked and talked with the mortals. With beer in hand, Tim told me, "I will never forget this day. And I bet no one else here ever will either." It's one thing to talk about changing the culture; it's another thing to change culture and change lives.

Tim, your buddies owe you a few drinks.  It's time to collect.

PS... Can you believe that the one day I don't go to practice is the one day Greg plays?  Hopefully, I'll see him tomorrow...