You voted for Nic, so here I am to deliver the goods. 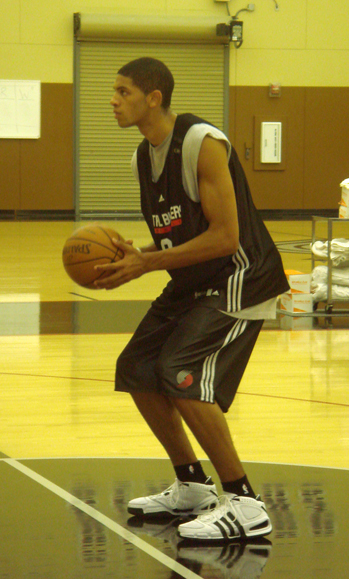 Dude is so focused.

We were allowed to watch about 35 minutes of practice today, however the team did not scrimmage during the open session.  By the time we got in there, about noon, many of the players looked tired already so I assume they were going pretty hard before we were allowed in.

Much to my surprise, as soon as we entered we were confronted by a black team on the court of Blake, Roy, Batum, Aldridge, Oden.  Interesting.  Verryyy Interesting.

This lineup drew questions after practice and Nate, of course, downplayed the importance of the lineup, saying "With Martell out, we've got to look at filling the position.... [Nic is] not on the first team.  It's just an opportunity to take a look at him."

In place of a scrimmage we watched as the three teams (Red: Sergio, Rudy, Outlaw, Ike/Frye, Przybilla and White: Tatum, Bayless, Jackson, Randolph, Hill) rotated through offensive sets, inbounds situations and then a fullcourt up-and-back exercise in which the team would take off quickly, outleting the ball to various players after a "made basket."

During the offensive set portion (no one was playing defense, mind you), our subject, Nic stood in the weakside corner (The Travis Outlaw Area, if you will) as Brandon worked the ball in to either LaMarcus or Greg.  Most of the run throughs ended with dunks or layups from Greg or LaMarcus, so that left Nic pretty much unoccupied.

Things picked up for Nic when the team went to practice inbounds plays, both from the sideline near halfcourt and underneath the hoop.  In particular, one cool inbounds play has Brandon inbounding the ball to Nic, after working himself open by running through 2 picks.  Nic then zips a pass back to Brandon who has cut quickly in towards the hoop for an easy close-range shot. The play looked like a winner, because the motion created by Nic working open draws a lot of attention, and the space Nic vacates is exactly where Brandon slides in. As long as Brandon can get a step on his man, he should be wide open for an easy two.  Of course, no one was playing defense during the drill, so the success of the play remains hypothetical.

During this portion, we saw Nic consistently deliver passes on the money and under time constraint.  If you've watched the last few games you've seen Nic's eye for the open man and his ability to hit moving targets on the run.  Both of these skills were exhibited during this drill.  Again, don't read too much into it, there was no defense to bother him.

During the fullcourt exercise, Greg would take the ball at the baseline, and quickly pass to Steve who was on the right side of the court.  Steve's job would be to 1)hit  Brandon who was running up the right side in front of him 2) hit Lamarcus who was running straight up the center of the court 3) hit Batum on a long diagonal pass as he ran up the left hand side of the court.  They would cycle through those 3 passing options as they went up and back, with the wings switching sides on the fly after every made basket, and with Greg acting as the trailer who would initiate the break and then follow the play.  Often the passes to the wings, particularly Batum, would be followed by another pass to a cutting LaMarcus.  The main goals of the drill seemed to be fluidity (everyone always moving) and, of course, conditioning.  At the end the coaching staff imposed a time limit to see how quickly the guys could get up and back -- the Black team was significantly faster than the two other teams, even though Greg was dragging a little bit.

The motion in this drill was rather intricate as the two wings needed to cut across the court to switch spots without hitting either one of the big men or each other.  That doesn't sound difficult in theory, but when everyone is running full speed, collisions are possible, which would totally disrupt the flow of the drill.  At one point, I saw Nic exchange hand signals with Brandon to coordinate the switch.  It was cool to see that.

After running through that drill twice, Nic was beat.  He had his head down, hands on his knees, looking quite tired.  His normal stance prior to that was standing straight up, arms crossed in front of his chest, as if a little bit reserved, withdrawn or tentative.  I'm not a body language expert but I play one on TV.  When he was not in the drill, he was watching intently.  Nic is a focused dude. 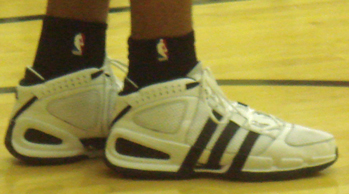 Nic's non-flashy Adidas Kicks.  He often wears clothes that say "I Heart France" where the heart is actually the Adidas leaf logo.  So you know.

After the timed version of the fullcourt exercise, practice was called and the team split up to shoot free throws.  Nic shot his free throws with Coach Monty, Travis and Channing, but not before double-fisting a total of 4 cups of water.  His mom should have packed him his own water bottle.

During his free throws, I did not see Nic miss a single one (he shot at least 10), aside from a lefty shot that he threw at the rim.  His free throw stroke is very clean and repetitive. Travis and Monty were joking around a little bit during the free throw segment, but Nic remained detached/focused in his own little world.  At one point he crowded Travis a little bit, accidentally, and Travis nudged him out of the way playfully.  Nic barely broke a smile, it seemed like he was still locked in.  Perhaps he's been studying tape of Bayless.  He did loosen up, though, just a little bit, towards the end of the drill, rolling a ball along his right arm globetrotter style. His arm is like 14 feet long. 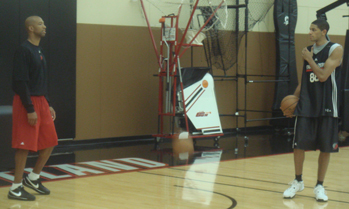 Getting schooled by Coach Monty.

After free throws, Nic shot jumpers with Travis and they would work around the key much like you see players do if you show up at the Rose Garden early.  They shot from a total of 6 spots, about 15-18 feet out.  Nic went 2 of 7, 6 of 7, 4 of 6, and then I lost count.  I think he finished at roughly 50 percent, understandable given they had just completed a nearly 3 hour long practice.  The release on his jumper still seems a bit low, but after practice he told a mob of bloggers that he has been working on his shot with Monty now for 2 months.

During the jumpshooting drill, Travis and Nic tried to skip ahead, to which Monty replied "Do unto the game as the game will do unto you. You try to mess with the game, the game will mess with you." He made them repeat their shots from the 5th position as "punishment."  It was all light-hearted but the guys were definitely tired.  Monty's instructions to Nic during the shooting drill were, "Make sure you JUMP, no set shots," "get a rhythm" and "take your shot."  The last instruction seemed to be made with the goal of urging Nic to shoot a bit more confidently.

Make it rain on 'em.

Nate's thoughts on Nic after practice were...

"He's doing some good things.  It's really early to rush to judgement."

"He's playing basketball.  Anticipating on the defensive end of the floor."

"When guys are open, he tries to get them the ball."

After practice, Nic was swarmed by reporters (Hey! He might be a starter!!) and he had the following to say...

"I just try to play my game."  [His pat answer to just about every question.]

"I'm not a completely different player... That wasn't me [in Las Vegas]."  [His thoughts on his play at Summer League compared to today.]

"I thought I was going to the D League." [HIs self-evaluation of his play from a few weeks ago.]

"Comfortable, very nice." [How it felt to play with the first team.] 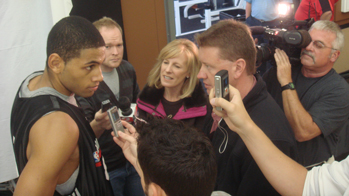 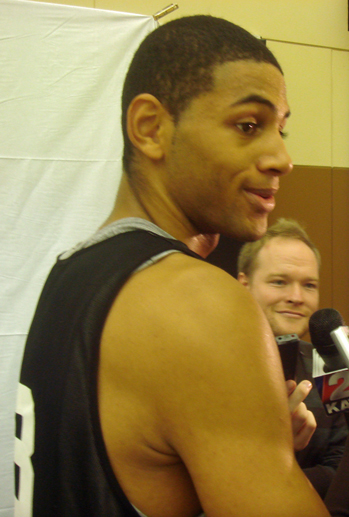 Nic and Lance are amused. Like two peas in a pod. 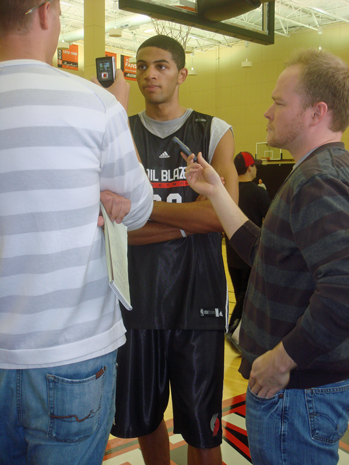 So there you have the first installment of Overkill Practice Breakdown.  Let me know if you'd like to see this feature again. Also, you might check Mike Barrett's blog for some more Batum.