Portland's own Salim Stoudamire is a legend in two games like Pee Wee Kirkland.

I present to you Salim's high school classmate, Lake Oswego's Cam Lasley aka Laz D, a rapper and Blazers fan who has not allowed Down Syndrome to get in the way of his dream: writing and performing music. 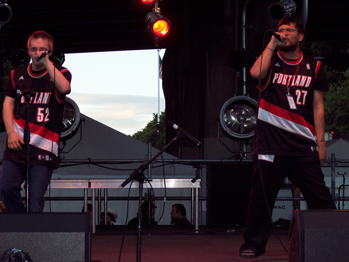 Gotta say, dude's beats are sick.  Be sure to check out Street Anthem and Girlfriend (linked on his myspace above).

In unrelated Stoudamire music news:  Antoine Stoudamire, aka Madgesdiq, was selling cds at the Clash of the Classes this weekend.  He also performed a song in between the two games.  Louisville recruit Peyton Siva was really into it, dancing to the beat.  Although I got the impression Siva would dance if you banged two forks against your dinner plate.  Anyway, Madgesdiq is still doing his thing.

As for us, well, we've still got our official Blazers Edge theme song.  That's my street anthem.